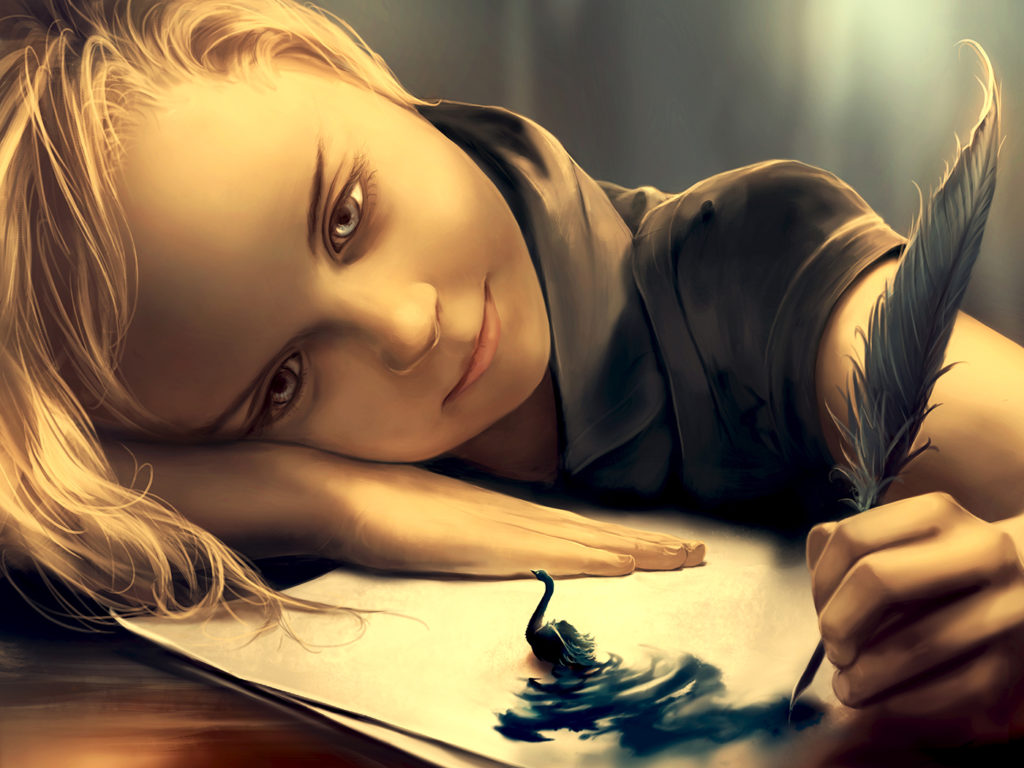 Her teacher Mrs. Fletch always went on about the same stuff. Some old person did something impactful and changed the way everyone lived and then here we were. Blah. Blah.

Grace stuck out her tongue between her teeth and struggled to keep her head from smacking her desk in… Absolute. Stupid. Boredom.

She looked around, searching for companionship among the thirty-odd students packed together in thirty-odd desks in front of the monotonous Mrs. Fletch. Everyone seemed to be hanging on the old vulture’s every word. Hanging by their fingertips. Even Grace’s best friend Em.

Two seats in front of Grace and a row over, Em chewed on her pencil’s eraser, her eyes focused razor-sharp on their teacher’s lecture.

Suddenly Mrs. Fletch mentioned something about a bloody battle or an assassination during a portrait sitting or something and everyone started taking notes. Even Em scribbled a few details in her notebook.

Not to stand out with her vacant expression and glazed eyes,  Grace turned her eyes to her own notebook and took up her pen. She started scribbling. Really scribbling. Jutting down nonsense. For all she knew, Fletch Vulture said something about Hitler hiring monkeys to chuck shit at Russians. Or the Brits inventing time machine to travel back to when Hitler was a baby… No. That was too cool to come from Fletch.

Grace blew out a shallow, quiet breath and forced her hand to move.

Her pen glided across the lined page in varying, random strokes, a river flowing gentling across a barely noticeable slope. Over  smooth stones. Around larger rocks sticking up from the current. Grace could hear the trickling rush of the water moving down the page, drowning out Fletch’s squawking. She could feel the spray speckle her drawing hand. She shook off the water from her knuckles and as did this, Grace heard… Quack. Quack-quack. A white duck with a black collar around its neck swam along with the river’s current. Wings spread, shaking off the droplets of water from its feathers. The duck dunked its head in the river. Plunk. After a moment or two, water leaped and the duck’s orange bill came up with a fish. A trout. Within seconds the trout wiggled free of the duck’s peak and plopped back into the river. The duck squawked with indignation, slapped the water, spread its tail feathers, and flapped its wings. Unfortunately the trout swam off Grace’s page and away from–

All around the  school’s bell rang, signally the end of class.

Grace glanced around. No one seemed to notice the river spilling out of her notebook. Nor the indignant duck angry about its meal leaping to freedom.

Backpacks were pulled up from the floor. Notebooks flipped shut, stuffed in said backpacks. Butts rose from seats. Conversations rose, drowning out Mrs. Fletch’s order for the class to read pages one-hundred-thirty-three to… something. Grace didn’t catch the last part. She barely knew where to start reading. Em would know. Grace would ask Em later.

Grace glanced down at the roughly-sketched duck swimming across her page, scrolled in blue ink. Then she closed her notebook’s cardboard front page with a slap. A strangled quack barely escaped the shut notebook. It sounded like a pissed off Donald Duck.

A tiny burst of laughter left Grace’s lips as she gathered her things up.

By the door leading out of Mrs. Fletch’s classroom Em waited.

Three high school teens in the woods on a Friday night… some beers… skaters with a grudge… what could go wrong? Add in a couple of genetically created … END_OF_DOCUMENT_TOKEN_TO_BE_REPLACED

A dark short story about one man’s oversight concerning his death.  Since dying was just not part of his daily routine, the man just went on with his … END_OF_DOCUMENT_TOKEN_TO_BE_REPLACED