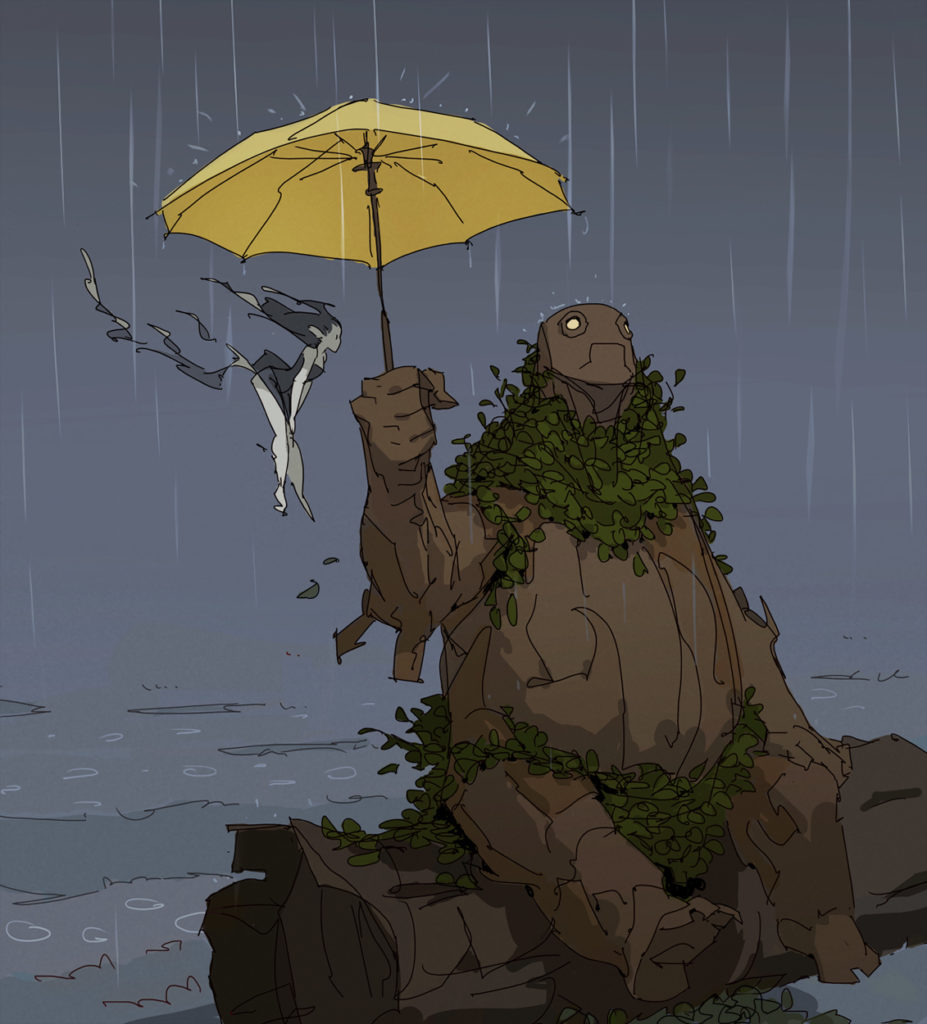 Rain by Varguy on DeviantArt

Rain pounded the forest floor. Fat drops played a melodious song against hollow logs.  Wind whistled along in time. Streams of water gurgled while running through runnels in bark and between mud tracks. Behind nature’s music tiny amusement watched and listened.

The rat-a-tat-tat-whoosh-shush of the forest’s stormy song woke the wooden creature.

The monstrous construct leaned haphazardly against the trunk of a massive tree, making the latter seem like no bigger than a sapling, forcing the trunk to conform to an unnatural curve. It blended nearly seamlessly with the tree’s bard, being made of wood itself, and having sat there for… well, it didn’t know how long.

Two yellow eyes cracked open, glowing like firelight. Except there was no heat deep within the construct. Searching itself as it sat and leaned in a depression of thick, giant roots, the construct searched internally. It found nothing, only an urge to… to…

Against its natural order to remain still and wait, the construct gathered itself up, tore itself from the tree it had laid in sleep against for so long, and stood. Its wooden body creaked. Flakes of wood no larger or thicker than fingernails broke away from disused joints. Leafs from its main snapped off and fell stiffly.

Raising a hand, attached to an arm as thick as any tree’s trunk, the construct examined itself. Each of its four digits was carved roughly, as if in haste, as if the only purpose was to make something massive, powerful, and dangerous. Nothing elegant. Rainwater flowed through the groves in the construct’s bark flesh, down the pathways of half a dozen tiny rivers to drip over the sides. After a moment, the water collect in the hand, in a pool. Then the construct dropped its hand and the pool emptied with a splash at its roots.

Despite the liveliness of the forest suddenly growing quiet, the storm kept up its determined course.

The construct turned its blocky head, considering its next course of action. An overwhelming blankness kept itself stiff with indecision. As if the construct were empty and it had nothing of substance to fill itself. Yet there was something strange. A spark. A tiny desire to just simply… go.

The construct peered through the trees, its lantern-like gaze unhindered by the grey light of midday suffused with the downpour of the storm. Distantly it sensed something. Something not of the forest. Something outside of what it knew.

Lumbering forward, the construct made itself way through the forest. And the forest groaned with apprehension. The construct squeezed through trees. Trampled undergrowth. Kicked aside logs, the homes of ants and slugs. There came the sounds of unintended destruction. The construct knew only one path. The path it set for itself. Nothing got in its way.

Among the browns and greens of the forest, color seemed to dull to the construct. That is until it came upon something peculiar. Something bright yellow. The construct understood the sun. Daylight. This thing seemed like a discarded piece of a sun. Could that be?

The break in the monotone of the forest tapestry halted the construct. Curious.

Bending, the construct reached out and picked at the yellow oddity and held it aloft for examination.

Eventually a new noise caught the construct’s attention. The crash and swish of this new sound grew louder until the construct no longer heard the forest.

Blue washed over the landscape. A blue waving and raging against a beach that flowed up to the forest. While the construct felt the pit-pit-pit of the rain against its discarded piece of sun, the ocean’s crash overwhelmed the surrounding area with terrible wonder.

Under root, the mud of the forest floor gave way to soft sand. The construct sunk ever so slightly with each step it took down the beach to the lapping water.

Suddenly the amusement that had overseen the forest returned. Laughter. Distant. The construct understood laughter but paid the tinkling bell no mind.

At the water’s edge sat a hollowed out piece of wood just the construct’s size. It felt soft and delicate, ready to bend and possibly break under too much stress.

The construct sat, still holding aloft its piece of sun. The piece of drift wood bowed under the construct’s considerable weight but satisfyingly didn’t snap.

It listened to the ocean urged on by the storm, an argument wonderful and terrifying for anyway witnessing. Behind the construct, the forest seemed to shutter. Out of the shutter, the amusement drew closer.

A voice spoke into the hole on the right side of the construct’s blocky head.

The construct turned its head ponderously. A little thing floated beside his blocky head. Pieces of its dress and hair flowed gently contrary to the strong gusts churning the beach.

The construct rolled its shoulders, what seemed an appropriate gesture. A crack below its lantern eyes opened and wind whispered with a husky, disused quality of years gone by. “I do not know.”

“I saw you walking through the forest,” the tiny thing remarked. “You seemed to know where you were going.”

Again the construct shrugged, looking back out over the ocean. “Seemed like something to do.”

Peevishly, the tiny person persisted with remarks. “I also saw you in the forest for a long time. That’s my forest. Mine and my kind’s forest.”

The construct said nothing.

“I remember like it was yesterday when you plunked yourself done and the two lights went out.” The tiny thing hovered now in front of the construct’s face and gesture at his lantern eyes. “You sat there for a long time.”

For a moment, only the roaring storm and ocean spoke. Then, the construct said, “Nothing else for me to do.”

“Before you sat down for a long time you were doin somethin.”

“Did you finish what you were doin? Do you remember.”

The crack in the construct’s face opened wide. With its other hand, the one not holding the piece of sunshine, it reached up and inside its mouth.

Not sickened but delighted and curious, the tiny thing clapped its tiny hands.

From its mouth the construct pulled a piece of paper. It understood paper. Especially those folded and placed in its mouth.

It handed the piece of paper to the tiny thing.

Piece of paper unfolded, the tiny thing was nearly  taller than the sodden piece of paper.

The tiny thing turned the paper around for the construct to observe.

The construct made no move, gesture, or acknowledgment toward the action.

“Can you read?” the tiny thing asked.

“Then how do you know what’s on the paper?”

“When its in my mouth, I just know what to do. What does this one say?”

The tiny thing turned the piece of paper back around and consulted the side with the inward fold.

Over the top of the paper, the tiny thing looked at the construct and said, “Nothing. It’s blank.”

The tiny thing examined the paper one last time before offering it to a particularly disgruntled passing gust.

“What will you do now?” the tiny thing asked curiously.

“I don’t know,” the construct said with certainty and longing, inside it was truly empty now.

The tiny thing nodded and then floated over to sit on the construct’s shoulder, underneath the dome of sunshine. “Mind if I wait with you for a while?”

In response, the construct didn’t complain.

Three high school teens in the woods on a Friday night… some beers… skaters with a grudge… what could go wrong? Add in a couple of genetically created … END_OF_DOCUMENT_TOKEN_TO_BE_REPLACED

A dark short story about one man’s oversight concerning his death.  Since dying was just not part of his daily routine, the man just went on with his … END_OF_DOCUMENT_TOKEN_TO_BE_REPLACED