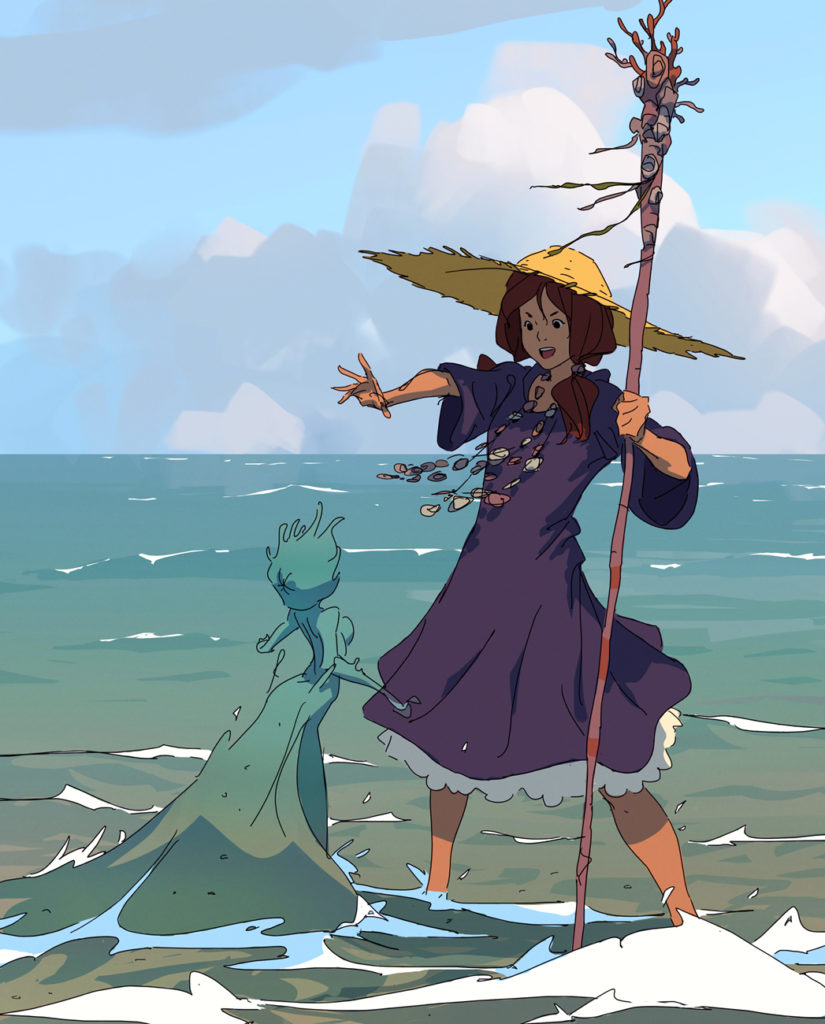 Seawitch Apprentice by Varguy from DeviantArt

Max never backed down from a dare. Especially a dare from herself.

Leaning useless in the corner was Wave Birch. Useless. Begging for Max to take the staff up.

I’ll be back before dark, Maxcene, Old Lady Winter told her late that same morning. Stay out of trouble. Do your chores. And above all: don’t touch the staff! I mean it, Max! You’re not ready.

Those words, the warning, goaded Max. Tempted her. Screamed at her. Defy. Ignore.

It was a dare Max couldn’t turn away from.

Just after lunch Max had swept the lighthouse’s main level along with the sleeping quarters and kitchen. She’d even polished the dark lamp in the center. These were no more tasks left for her to use as excuses to avoid taking up Wave Birch…

Max didn’t hesitate any longer. She put away the broom and went to Wave Birch, taking the staff in hand easily.

The bone white length of wood hummed with energy. Shook with pent up potential. Max chuckled. The staff felt made for her hands. Just more justification for a little independent study.

Staff in hand, Max snatched her straw hat from her room and rushed to the stairs leading down from the lighthouse’s main level. She padded down the spiraling stairs that wound along the inner walls of the lighthouse, excitement high and care tossed to the wind that whistled through the cylindrical building.

The lighthouse stood sentinel atop a grass hill, on a shelf that overlooked a quiet breach. Smells of pine and fresh earth mixed with the salty brine of the ocean.

A path made of tiny pebbles curved away from the lighthouse’s backside, away from the shelf’s steep drop, along the shoulder of the shelf, and down gently. Bright green grass on either side of the path turned to yellow sand. Sand fine and soft, perfect for sinking your toes into.

Max’s bare feet hit the sand. She hissed. The sand was uncomfortably warm. She skipped and danced down the length of the beach until the sand turned dark from the low tide lick.

Cool refreshment washed over Max’s feet, lapped at her calves, and splashed against the hem of her blue dress.

In relief, Max tilted her head skyward. A pleasant blue gazed back at her. The sun peeked out from behind drifting puffy white clouds.

A breeze tugged at Max’s dress and tried to snatch her straw hat. She pressed a hand down on the crown until the wind gave up. She nodded.

Max followed a retreating wave further out into the shallows until she was calf-deep in greenish-blue water.

She bent down and skimmed her free hand across the surface of the water, letting the water wash over her hand and drip through her fingers.

From a burlap necklace around her neck Max plucked a seashell from among many. A tiny one the color of salmon. She held the shell up to her ear. A tiny whisper, like the wake from a gust of wind, left the shell gently.

Nodding, Max tossed the shell into the ocean and watched through the clear water the shell drift to the bottom and rest half sunken in the sand. A wave hit Max then, struck her square across her front. She wiped spray from her face, eyes still focused on the shell. With the staff–borrowed, not stolen, she would return the thing eventually, really!–held in both hands, she raised Wave Birch and brought down the gnarled, knuckle-looking end. The barnacles and clams clinging to the end shook, the shells empty of whispers knocked. Max plunged the staff into the water, at the salmon shell buried. In words lost to time, remembered only by the women of the waves, passed from her grandmother’s grandmother and on, Max spoke her call. Her voice she pitched low, beseeching, polite, demure. When calling, you didn’t demand… you requested.

Max drew Wave Birch back out of the ocean and as the head broke the surface, the water seemed to cling with desperation to the bone wood, forming a hand made of water. The hand with its flowing fingers wouldn’t let go. Max pulled. She tugged. The ocean seemed to want to hold on to this part of its self. She nearly fell on her rear before the water spiraled up, growing from a hand to an arm, to a torso, and finally to a head cascading with a waterfall of liquid tresses. The ocean itself seemed to form the water sprite’s gown.

Max held on to Wave Birch, raised the staff high over her head, and shook the staff with elation and triumph. She’d done it! She’d called a sprite and the sprite actually came to her!

Quickly thumbing through her memory, Max tried to recall the proper etiquette for dealing with a sprite called. To buy herself a moment of thinking, Max cleared her throat. Then she remembered. Max bowed, sweeping her fingers across the ocean’s surface. She then held out Wave Birch to the sprite. The water-based creature examined the shells, clams, and sea life clinging to the wood. Curious. After two heartbeats, the sprite reached out a slender liquid arm and peeled off a barnacle.  It then shoved the barnacle in its mouth and preceded to chew with hardened teeth of water and then swallow. Max could see the barnacle, the entire thing, move through the sprite’s liquid body.

Max knelt in the ocean. Her dress bellowed around her on the surface of the water. She brought her hands together around Wave Birch. The bangles and ocean offerings at the end clacked and clattered. She closed her eyes and placed her forehead against the bone wood.

“I am thankful you are pleased with thy offering,” Max told the sprite, who was still digesting–swishing around–the barnacle around in its liquid form, as if tasting. “With your pleasure, I would have you be an extension of my will.”

Max opened her eyes, looked at the sprite, and grinned widely.

At the words ‘my will’, the sprite’s attention focused back on Max. It tilted its head. The waterfall mane turned sideways.

The sprite crashed over Max with a tidal wave. Pulled her under. She lost hold of Wave Birch and her straw hat as the water churned her in dizzying directions. She opened her mouth to scream. Bubbles erupted but nothing more. All Max saw were bubbles and foam. All sound had been shut out, muffled. Suddenly the bubbles and foam parted and a face appeared in front of Max. It was the sprite. Etheral. Beautiful. It spread its mouth and those jagged teeth appeared, two rows of hardened water that gapped as if to swallow. The sprite lunged at Max through the water, mouth unhinging, stretching grotesquely, unnaturally to engulf Max’s entire head.

Three high school teens in the woods on a Friday night… some beers… skaters with a grudge… what could go wrong? Add in a couple of genetically created … END_OF_DOCUMENT_TOKEN_TO_BE_REPLACED

A dark short story about one man’s oversight concerning his death.  Since dying was just not part of his daily routine, the man just went on with his … END_OF_DOCUMENT_TOKEN_TO_BE_REPLACED