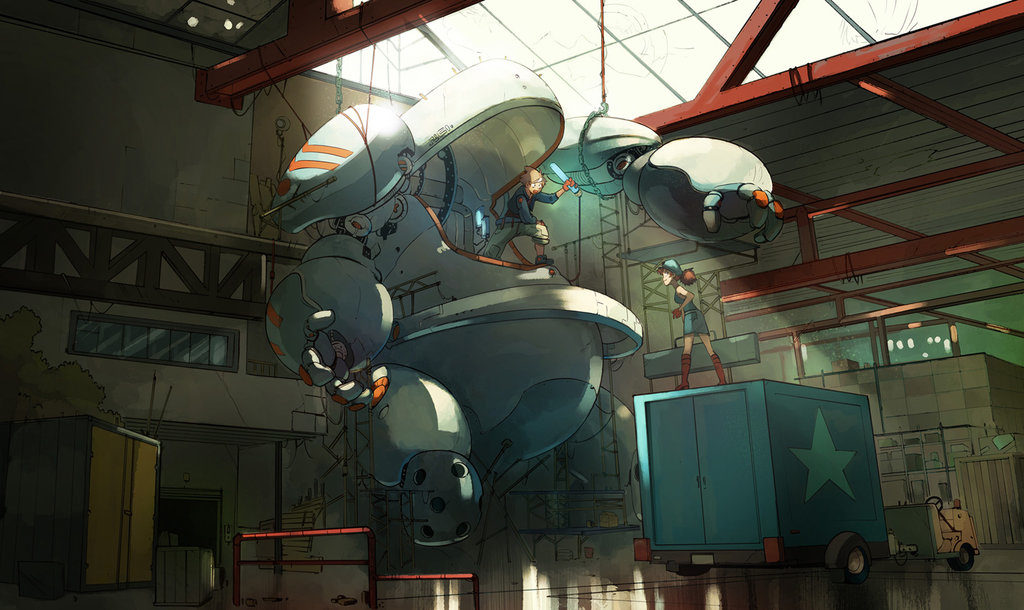 War child by Djetho on DeviantArt

Fanya shuffled through papers. Bills. All with a red stamp at the top. PAST DUE each stamp read.

She looked up from her desk inside the office. A wide window overlooked the garage floor. Two autos lay jacked up on lifts. Tires pulled off. Hoods open. Bellies exposed.

Absent from the garage: the sound of tools. The telltale sound of work. Progress.

Fanya’s eyes flicked to a corner of the garage taken up by a useless piece of junk carefully protected by a oil-stained, grimy dropcloth.

Under her breath Fanya said, “If he didn’t keep that stupid thing around, we’d have room for another auto to work on.”

On the desk, fanned out, were invoices on yellow carbon paper. Across the top said Starfield Repair. All of the invoices were due as well, as in: the owners of the two autos currently in the garage wouldn’t stop calling asking when their autos would be ready.

Fanya flung down the garage’s bills in frustration and blew out a consternated breath. She tipped up her cap and wiped sweat from her brow. Behind her a fan blew. Above her duct working ran across the office and the garage, silent, not working. No bill for fixing the air conditioning, the garage didn’t have the money.

Pulling down her cap’s bill, Fanya pushed her chair away from the desk and stood. She then marched from the office, into the garage, and to the rollup door at the front. Wind from outside blew in. Hot. Humid. Sticky. The gust tugged at the flag hanging down from the rafters. Its faded blue field and big white star flapped in the breeze.

Trotting down the road, carefree as if he didn’t have two autos to work on, came Fanya’s brother Timur. In front of him Timur pushed a wheelbarrow, the inside laden with a large metal object.

“What is he bringing home this time?” Fanya asked herself. “More junk?”

She shook her head as she watched her brother. He stirred his barrow around walkers on either side of the street. They dodged out of his way. Cursed him. Called him names. He beamed at them, with that way he had. One lady swiped at him with her cane. He hopped and skipped over the length of wood. Another man attempted to cuff Timur across the ear for almost rolling over his foot. More than once her brother’s load nearly tipped over. He was a scrawny kid with a big head for a too big brain.

“Where have you been?” Fanya asked Timur, not disguising her anger and mistrust.

“Oh. Here and there,” her brother answered with a whistle as he rolled past her.

“We have two autos need fixing. Struts on one. Suspension on the other. New breaks!”

“The parts aren’t here yet.”

“Geez, Fanni. I can hear you just fine. No need to yell. You’ll lose your voice. Then what, huh?”

She growled. “You make me so angry some times.”

“Sometimes?” Timur looked over his shoulder. He was still grinning.

Fanya attempted to cuff her younger brother on the ear herself. He ducked.

Timur stirred the wheelbarrow and its contents to the back of the garage. To where the hunk of junk waited.

“I don’t know why you spend your time on that useless piece of trash,” Fanya said with exasperation. She flicked a dismissive hand at her brother’s project.

“Cause… When it’s finished all our problems will go away.”

Fanya shook her head. “No. When you finish repairing the two autos and we can take on a few more jobs then our problems will begin to lessen.”

Timur put down his barrow with a grunt of relieved effort. His skinny arms wobbled. “Yeah-yeah. I’ll have both autos up and running like new tonight. Promise.”

With a sigh and after rubbing the ache from behind her eyes, Fanya moved to stand beside her lazy brother. “Seriously. What did you bring home?”

A few dirty rags lay over most of the contents in the wheelbarrow. Fanya moved them away, tossed them aside. Inside the bowl of the barrow lay a hand and part of an arm. Both made of rusty, calcified metal. Scrap if Fanya had ever seen scrap. And living with Timur, she’d seen scrap.

Timur reached up and pulled away the drop cloth from the piece of junk cluttering one corner of the garage.

Hanging from the rafters by chains was a mech suit. An old model used by soldiers in the last great war, soldiers like Fanya and Timur’s father Yosif. The mech had a sea foam green body made of metal, all the pieces scraps from other suits. It’s arms were a faded red, early pink, one missing the lower half and the hand. It’s cockpit was missing the hatch. Inside the cockpit the pilot seat was battered, foam stuffing stuck out of various rips in the buck hide. Shoulder pauldrons were the only pieces of metal with new paint. Both had been painted a faded blue with a white star. The symbols bold and proud. Fanya sighed, remembering her father.

As the memories slipped away from Fanya like so much smoke, Timur began digging in the wheelbarrow, heaving the metal appendage. Timur lugged the arm and hand to a steplatter beside the mech. At some point her younger brother had slipped on his toolbelt. He was lifting the arm and hand up the stairs, to the empty joint where the mech’s left arm ended and a dozen disconnected hoses and wires began. It took a moment for Timur to adjust his new prize so he could secure it to the mech and do the work of attaching one to the other while holding in place the arm and hand.

“Do you have to do that now?” Fanya complained.

“No time like the present,” Timur answered absently. “Besides, I told you I’d get the autos up and running later. Don’t worry so much, Fanny.”

“I hate that name,” she said sadly.

“I know,” Timur told her with his own sad chuckle. “Even when Dad called you it.”

“I told him never to call me Fanny. Kids laughed at the name.”

“He didn’t. He said the name was lovely… like me.”

Timur was turning a wrench when Fanya wiped the tears from her eyes and pulled her head up. He slipped the wrench back in his tool belt and pulled out a screwdriver. Several minutes went by while he tightened some screws in the mech elbow joint.

Timur let go of the newly acquired arm and hand before spreading his own two arms wide.

“Great. You can get back to work now. Play later.”

Timur waved his sister’s comment away. “I’m almost done. Once this big guy is up and running I can enter him in the games. He’ll make us enough money to turn the garage around. I promise, Fanny. Promise.”

“And until then, you got job orders to fill.”

Timur looked at the piecemeal mech with fondness. “Just wait, Fanny. Just you wait and watch us.”

Three high school teens in the woods on a Friday night… some beers… skaters with a grudge… what could go wrong? Add in a couple of genetically created … END_OF_DOCUMENT_TOKEN_TO_BE_REPLACED

A dark short story about one man’s oversight concerning his death.  Since dying was just not part of his daily routine, the man just went on with his … END_OF_DOCUMENT_TOKEN_TO_BE_REPLACED