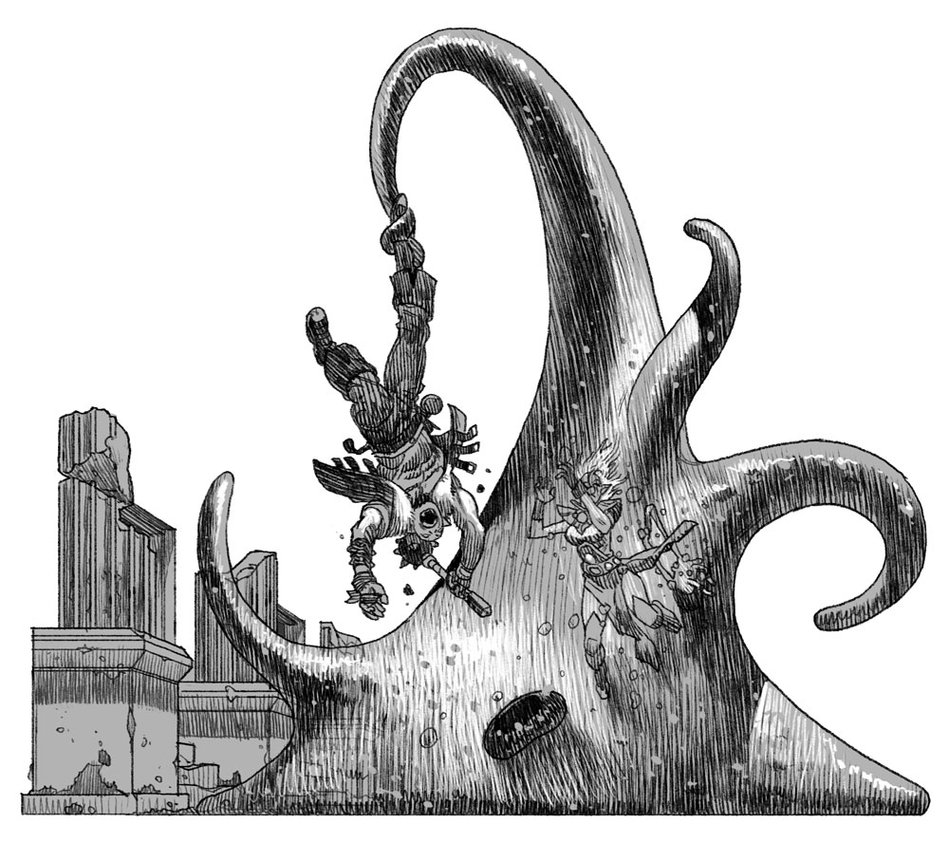 Giant Amoeba by pietro-ant on DeviantArt

Grah stood tenuously atop the water’s surface. His footing unsure.

He kept looking at his boots. Wet Boots. The leather footwear was wrapped with cooper that shined with a blue glow, the same color as the water. All around him the sea was littered with the wreckage of his ship. Nothing else. No sign of the crew or Glory.

In his hand he held his spiked mace. In his right he held a slim-bladed sword with a wire basket hilt. The blade seemed no bigger than a digger in his big mitt. That sword’s slim blade was slick with water. Drops fell from the edge and hit the surface of the water to create ripples that spread out and away from Grah’s feet. His feet that were slipping with the smallest of movements. His kind were not meant for the sea. Land. Land was where his people liked to fight.

Grah sucked on his left tusk, his beady black eyes turned down and began to pierce the depths of the water. At first blue but than deeper down thickly dark. He squinted. Above the sun shined without a cloud in the sky, bright and hot, bouncing a glare into Grah’s eyes.

He couldn’t see anything below the water.

“Where did ya go, Glor?” Grah said quietly, more to himself.

Aside from his own careful steps pressing dangerously against the water, the surface was still. No bubbles. There’d been bubbles when Glory was taken. Could she breath? Was she dead, drowned? He didn’t think of the sailors survived but Glory… She was tough.

Suddenly, his shadow started to grow. To stretch and spread out.

Grah retreated, stepping back. Taking small steps to reach the outside of the shadow.

His feet slipped atop the slick surface, sending him sprawling on his rearend.

Underneath him, the sea exploded.

A dozen tentacles rose up from a bloated body, wiggled, reached out as if testing their dexterity and reach. The water construct undulated, burped, and squelched grotesquely.

His partner writhed inside the creature’s belly, suspended, kicking and punching in what Grah witnessed as sow motion. No impact. No force. Glory put on a face of determination and fury. But Grah saw something. Something in Glory’s eyes. Terror. She was holding her breath but she wouldn’t for much longer.

Grah climbed to his knees, the magic in his Wet Boots spreading up his legs, around his knees, and planted his feet. Neither of his feet slipped. This time.

He presented his spiked mace and Glory’s blade to the wiggling sea construct, threatening the thing. “Give me back my partner, creature!” Grah said through clenched teeth, his tusks rubbing roughly against his thick blue upper lip.

Three of the water appendages whipped straight for Grah.

He cut each with Glory’s slim blade, splashing water about, before any could touch his person. Those arms recoiled into the liquid body where Glory was trapped.

Four of the still whole tentacles rose up, twisted together like a rope, filled each other out like a pour into a tankard, and merged into one massive water arm.

Drops of water rained down on Grah as the arm crashed on top of him.

He rolled out of the way, feeling the magic of his boots sheathing his body, keeping him up atop the surface of the water. On his back he slipped, out of control, as the arm slapped the water and a wave curled and hit Grah. Grah turned his back to the wave and took the brunt of the blow across his shoulders.

Grah wiped spray from his face as he rose to his feet. In his belt he tucked Glory’s sword and with both hands he took hold of his wicked mace. Its business end a spike ball, tips rusting ever so slightly, handle wrapped in sun-faded hide. He bent his knees, set his shoulders, and readied for–

Something wrapped around Grah’s foot and squeezed.

A tentacle no bigger than a hand sneakily had risen up behind him and coiled around Grah’s ankle.

Grah was flipped upside down and risen in the air.

He didn’t hesitate. He struck out with his mace, aiming to bash the watery limb and free himself. The tentacle anticipated the osouran warrior’s attacks. Holes opened up in its watery form, passing the mace harmlessly straight through.

After each swing and forward thrust of his weapon, Grah pulled back and renewed his attack only for more holes to open up in the tentacle. The tentacle thickened, drawing more water up into itself, as the water took on the look of holey cheese.

Eventually the tentacle closed in around the handle of Grah’s mace before the osouran could pull the weapon free. Suppressive pressure made pulling the weapon out of the water difficult, near impossible, as if the metal ball and hide-wrapped wooden handle weighed too much for Grah to lift.

The tentacle snapped the mace out of Grah’s grip and flung the weapon away. It did the same with the dagger Grah drew from his belt, breaking Grah’s left wrist to wrench the weapon away.

Grah screamed as the water construct’s tentacle pulled him closer to its bloated form, toward Glory. It meant to trap him inside with his partner, to drown him.

More tentacles came for Grah. Together they unstrapped his boots. Pulled the Wet Boots off his feet. He felt the magic keeping him above the water slip away. The boots the water construct tossed away. Grah heard the footwear plop into the sea with blunt splashes.

Until now Grah had not noticed but below Glory, at the base and center of the construct was a jelly fish. Big as a man’s torso, the creature had been raising water constructs across the known sea, crushing ships, waylaying shipments. So much trouble for such a unsuspecting creature.

Glory was still punching at the construct’s water wall, attempting to escape its bulging belly. Spray dappled Grah’s face, drawing his attention. Glory stopped when she’d got his attention. She looked nearly gone, struggling with the last few gasps of air in her lungs. Her eyes darted from Grah’s gaze to his belt and then she arched her back and looked at the jelly fish below her.

Ten years of jobs together. He could read Glory well.

Grah drew Glory’s sword from his belt and started swinging at the water limbs. The construct held him out, away, at a safe distance so as not to be cut down.

Attention focused on Grah and his desperate efforts, the construct didn’t expect…

Grah took one last swipe at a tentacle. On the downward cut, he swung the blade back around and toward the construct.

He let go of the handle halfway through the arc.

The blade spun at the construct’s belly.

Another tentacle emerged to catch the weapon on instinct or reflex.

It made the mistake of pulling the sword too close into its depths.

Inside her watery prison she wasted no time.

She reversed her grip, dove so that her head and body were pointed down, and plunged the blade into the jelly fish’s transparent, luminescent head.

All the tentacles lost their form and splashed back into the blue sea. As did Grah. He and Glory fell into the sea bodily.

After hitting the surface and drifting down for a moment or two, Grah began to work his thickly muscled arms and swam back up. Grah drew in a deep lungful of breath when he emerged. A heartbeat later, Glory broke the surface as well. Her breathing was erratic and desperate. She’d held her breath for five minutes or a little less. Her black hair was lank, clinging to her ashen face. Her blade-like ears drooped with displeasure. She grabbed a passing piece of the hull, a piece of the ship she and Grah had been on when the jelly fish’s construct struck. Grah grabbed on to a barrel. He signed. There was no ale inside but empty the barrel could float.

After several more minutes of taking in sweet breaths, Glory eyed Grah. “No more boats. We take jobs on land. Land. Land only. You hear me, Grah!?”

Grah nodded. “Hear ya, Glor. I hate swimming too.”

Three high school teens in the woods on a Friday night… some beers… skaters with a grudge… what could go wrong? Add in a couple of genetically created … END_OF_DOCUMENT_TOKEN_TO_BE_REPLACED

A dark short story about one man’s oversight concerning his death.  Since dying was just not part of his daily routine, the man just went on with his … END_OF_DOCUMENT_TOKEN_TO_BE_REPLACED