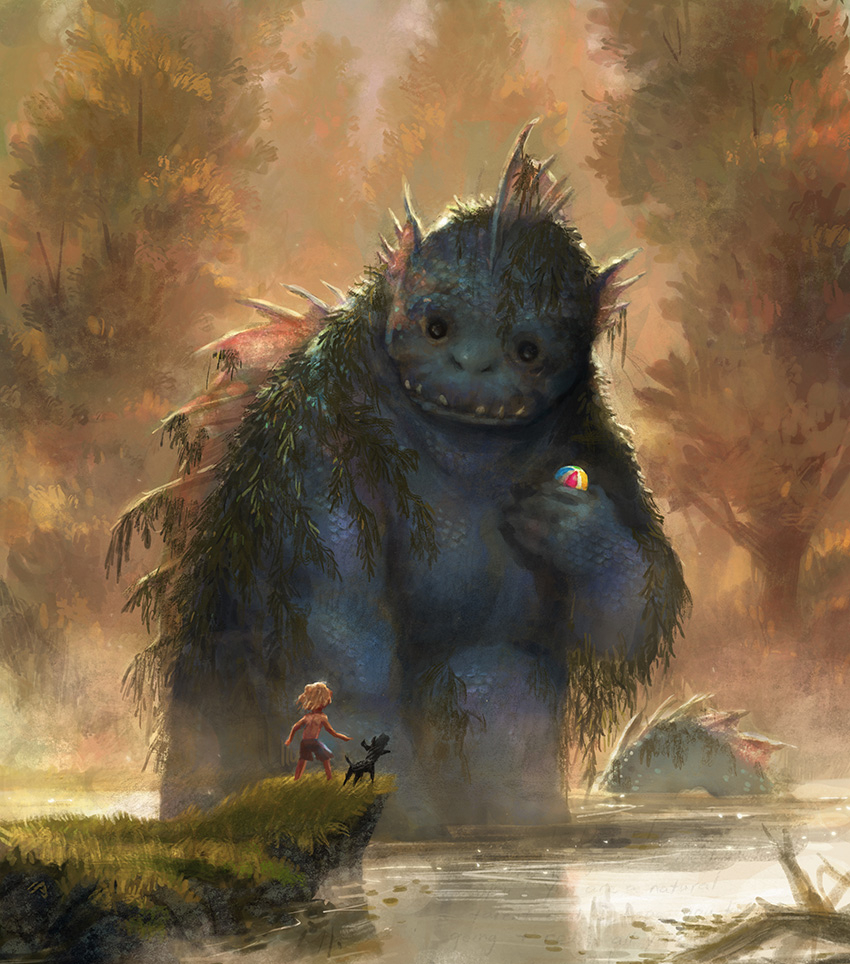 Finders Keepers by imaginism on DeviantArt

Every time the ball flew through the air Scottie dashed after the toy. Barking. Waging his tail. Dark coat glossy and shiny in the summer sun.

The game was as much for the pup as it was for the two boys.

Seth loved watching Scottie chase the ball with such enthusiasm, more enthusiasm than Seth or his big brother Tom. Ears pinned back. Stubby legs whirling faster than they had any right.

The two boys and their dog played catch for a long time, long after Scottie’s legs got tired and the terrier flopped down among the long grass. Seth threw the ball back to his big brother before paying any attention to the dog playing dead.

The dog groaned and swiped a paw over his dark eyes, churning his long beard and expansive eyebrows. He showed the ten year old boy his belly.

The ball came at Seth. Straight for his head. Tommy had chucked the ball as hard as he could while Seth’s attention lay with their dog.

Seth threw up his arms over his face, partly to block the blow but also in a semi-attempt to catch the projectile. The ball bounced off Seth’s forearms and into the grass at his bare feet. With the gentle thump, Scottie stirred but ultimately decided to pass on an attempt to reach the ball. He was several feet away and his boy could easily pluck the ball up.

“What was that for, Tommy!?” Seth said indignantly. He bent down and retrieved the ball. The plastic stripping made dry squeaking sounds against Seth’s fingers. The plastic was hot too, from the sun.

“Just keepin’ you on your toes, little brother,” Tommy replied with a laugh and a wave to dismiss his throw’s headshot.

“You coulda took my head off!”

Tommy rolled his eyes. “Don’t be such a baby, Seth.”

Winding up his arm, cocking back, raising one leg like all pitchers do in baseball games, Seth threw the ball. Threw the ball as hard as he could. The momentum of the throw thrummed in Seth’s chest as the ball slid off his fingers and flew.

The ball soared over Tommy’s head.

Scottie the Terrier’s head bobbed up and watched the plastic beach toy as it hit the ground behind the older boy. Then the dog licked his chops and settled back down to his nap.

Tommy shook his head. “Your aim is terrible but the distance and height weren’t so bad.”

Seth scrunched up his face. “I meant to throw it over your head. To make you run after the ball.”

Two steps and Tommy retrieved the ball. He tossed the ball a short distance up in the air as if testing the weight.

“Sure you did, little brother,” Tommy said.

While the words were exaggerated and presented in good fun, Seth was already wound up. Being mocked was not his favorite passed time. All he wanted was respect from his brother. Once the summer was over Tommy would be back to hanging out with his friends and doing stuff at his school. Older kid stuff. All Seth would have is Scottie.

About to throw the ball again, Tommy stopped in winding back his arm. On the wind a bell chimed along with words in their mother’s voice. The voice called for the boys to come inside, for dinner.

Both boys looked to the hill and the cottage atop the crown, their home.

“Do we have to, Tommy?” Seth asked, disappointed.

Tommy threw the ball. Threw the ball high. High enough for the ball to blot out the sun for the barest of moments. Then the round shadow fell behind Seth, far behind. So far that when the ball hit the ground, it bounced a single time and ended up in the little pond on the boy’s family property, the one open to the sun, the edges shaded by trees.

The ten year old turned around to toss a scowl so mean and terrible at his brother that the old boy would turn to stone. Turn to stone or become Seth’s slave out of guilt.

But Tommy was already jogging up the hill toward their house, waving behind, not looking. Tommy shouted over his shoulder as he went: “Don’t forget the ball.”

Seth kicked the ground and muttered a curse he knew was bad because his mom scolded Tommy once for saying the same thing, once.

Before turning to rush after the ball, Seth was beat by Scottie. The dog was already at the edge of the pond, barking at the ball as it floated casually away from the tall grass and to the pond’ center. Seth lightly ran after the terrier and the ball.

He put a comforting hand on Scottie’s head when he caught up with the dog, between his pointed ears, and ran that hand down the dog’s back. The bog shuttered with appreciation.

Seth was already stripping off his t-shirt and standing. The ball was floating away from the shallows and toward the pound’s deeper depth. He next took off his jean shorts, stripping himself down to his underwear. Seth’s mom would hate to see him come home with his clothes soaked. Tommy knew as much too.

“Stay here, boy,” Seth told the terrier. “I’ll go get the ball.” Seth’s words sounded none too pleased about wading and swimming into the pond. He didn’t care how hot outside it way or how cool the water. Tommy said leaches and monsters lived in the pound.

Seth put his feet into the pond, up to the ankles, when several things happened. The bottom of the pond began to shake beneath the boy’s feet. Ripples in the water began to spread from a concentration of thick bubbles. Scottie started barking with protective alertness.

Seth stepped back quickly out of the pound just as the green and brown muddy water shot up from the pond in a geyser. Muck splattered Seth’s face. Caught in his shaggy blond hair. He closed his eyes and wiped the muck from his face, from around his eyes. When he opened his eyes again he saw it…

Sitting in the pond was a monster the size of Seth’s family’s cottage. Maybe larger! Definitely larger than Scottie. And it was holding Seth’s ball gently in its hand.

Seth found himself shaking and unable to move. Not even to retreat. He couldn’t even shout for his big brother Tommy. Scottie had no fear. The dog barked at the larger creature sitting in the pond.

The creature reminded Seth of that monster from the lagoon, from the old black and white movie with horrible picture quality and acting. Except this real one was blown up ten sizes. It had blue, scaly skin that moss clung to. Its back was spiny and finned with a thin membrane the color of a clam’s insides. Two tiny black eyes regarded Scottie with an aloof annoyance but lacking in violence. This somewhat put Seth at ease. Somewhat. What didn’t was the row of bottom teeth that stuck out from behind the creature’s wide lower lip. It’s face also reminded Seth of a hippo, except with two membrane pink fins on either  side of it head  and top.

The comparison made Seth giggle a hiccup.

Seth clapped his hands over his mouth.

The creature turned its attention from Scottie then to focus on Seth. Its hippo-like head tilted to the side and a curious grumble followed from deep within. A four fingered claw rose up and scratched at the amphibious creature’s round ear, flapping the fin jutting from behind. Brackish water rained down with bits of algae and soggy pound scum.

Bolstered by the creature’s aloofness and hesitation to eat him and his terrier, Seth stepped forward and pointed at the ball.

The creature glanced down and blinked at the ball cupped in one of its claws.

When the pond creature didn’t respond or move, Seth tried again. “Can I have my ball back?”

The pond creature yawned and stretched. A waterfall cascaded down its back and his coat of moss shook like tree branches in the wind.

“No! You’re not supposed to eat it!” Seth said as the creature put the ball up to its wide, thick blue lips.

Please don’t pop the ball! Tommy will kill me, Seth thought as he watched the ball come perilously close to a sharp tooth.

The pond creature stopped mid-yawn and  looked at Seth again.

“You’re supposed to play with the ball,” Seth added.

Hearing and knowing the word ‘play’, the pond creature laid back on its back, kicked up its webbed feet, and rolled. The ball was still cupped in its hand. Water churned and spashed everywhere. Scottie ran around, dodging fat drops of the muck. Seth laughed.

The pond creature stopped rolling and looked at Seth, black tongue hang out and between two long teeth, moss dangling down between its eyes and over its flat nose. To the boy, the creature seemed happy.

Up the hill a voice called down unknowing. “Seth! Time for supper. C’mon up, little mister.”

Seth looked back at the pond creature sorrowfully. “I’ve gotta go.” He held out his hands for the ball.

Dark, beady eyes darted between the boy and the ball. The creature hesitated. But after several moments it flicked the ball to the boy and sat up straight.

At his feet, Seth no longer heard Scottie barking.

“I’ll see you later. Promise.” Seth waved at the creature, who panted with anticipating. Then it sunk back down into the pond.

Bubbles churned the surface of the dark water and then went still as the creature disappeared.

Funny. Seth never remembered the pond’s center being deeper than his father’s chin. The pond creature was much taller than Seth’s dad.

Seth took another look at the pond. Squinted. Tried to peer through the depths. Then he shrugged.

Boy and dug jogged up the hill as the sun dipped down below the trees ringing the pound.

Three high school teens in the woods on a Friday night… some beers… skaters with a grudge… what could go wrong? Add in a couple of genetically created … END_OF_DOCUMENT_TOKEN_TO_BE_REPLACED

A dark short story about one man’s oversight concerning his death.  Since dying was just not part of his daily routine, the man just went on with his … END_OF_DOCUMENT_TOKEN_TO_BE_REPLACED