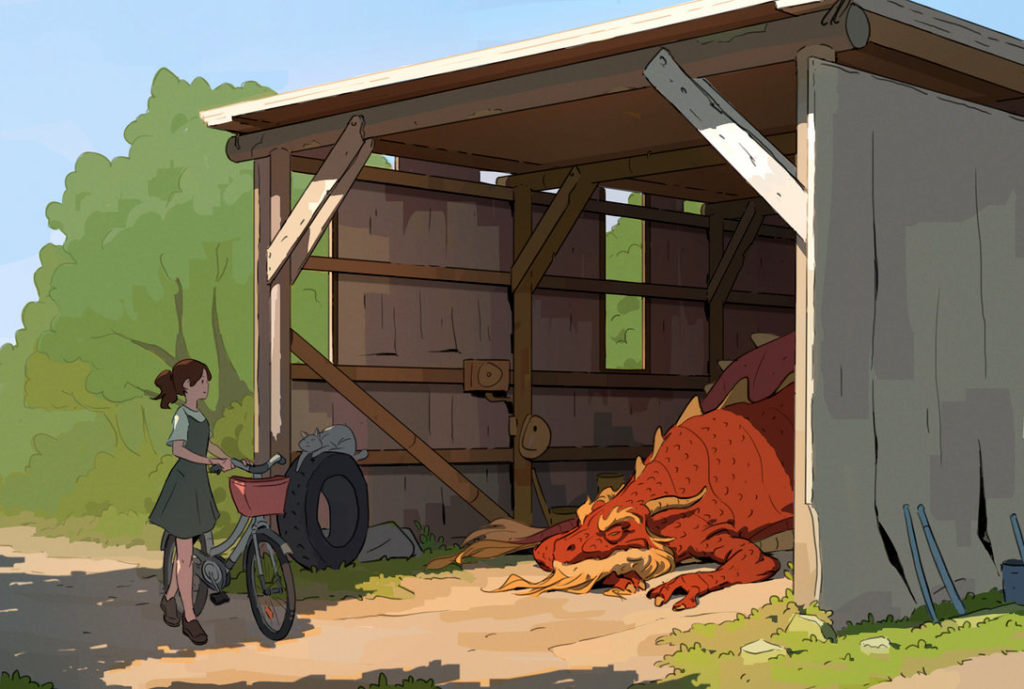 Dragon’s Lair by Varguy on DeviantArt

“If He Stays, He Stays in the Shed”

Beneath Nat the wheels of her bike twirled, cutting through the dusty road with a snickety-clatter. She road the path leading away from the highway. Through the thicket of trees that hid her family’s home from the main drag. By now the clogged sputtering of the school bus was a distant memory.

Not far ahead she could see the old shed. The old shed her father had once parked his riding mower and tractor inside. Where he still kept his hand tools. Smoke curled across the ground from that shed’s open doors. There were no doors on the front anymore actually, but there were once. Anyone would panic seeing the smoke. Smoke meant fire. Fire meant burned crops. Burned houses. But not Nat. She knew better than to panic… not yet.

Coming up the road, making sure to stay clear of the smoke coming from the shed, was Tux. Tux always came to greet Nat after school.

The cat took one quick peek inside the shed and moved on quickly, not wanting to tempt one of his nine lives. City cats claim to have nine lives. Farm cats actually do. On a farm, a cat tends to find more trouble than mice. A farm cat needed nine lives–and twenty or more would’ve been better.

Nat rode her bicycle toward the old shed and the Tux.

Tux stopped short and stretched, arching his back, curling his tail into the shape of a question mark. He didn’t move any further to meet Nat. His luxurious movements suggested impatient waiting.

Shaking her head, Nat stopped her bike a few feet from the black and white cat and said: “Come to greet me have you, Tux?”

Nodding, Nat responded with: “I am humbled you took so much time out of your busy day for me.” She gave the cat a little bow.

Another meow, this time with more enthusiasm. A little more. A pinch. Tux began to lick one of his paws then.

Nat signed but smiled at the cat. “C’mon on then.”

She reached down, picked up the black and white cat, and placed him in the pink wicker basket attached under her bicycle’s handlebars. The cat suffered with dignity and only a single–but long–hiss.

Feet back on the peddles, Nat pumped her bicycle into motion, standing for a couple hard and heavy revolutions before settling down in her seat again.

Safe in the bicycle basket, Tux’s green slitted eyes turned to the shed’s double opening and he hissed. Daring. Without fear, at least around Nat. Nat rubbed the cat between his triangle-shaped ears.

“Why, hello there, Jackie!” Nat proclaimed, contrary to the cat’s mood. “Nice, warm day we’re having. Wouldn’t you agree?”

Inside the old shed, half in the shade and half in the late afternoon sun slicing diagonally inside, lay a red dragon. Its scales were a faded crimson, a few shades before pink, and more than a few were missing. A few of the bigger ones. The gold fins along its spine and tail were floppy. One of the two horns on its brow and jutting over the back of its narrow head was broken off away to the root, an accident with another male if the dragon’s tale told true. The gold hair above each of its closed eyes and along its chin was wispy and more silver than gold these days. Despite the creature’s advancing age, the dragon’s claws remained well groomed and tended to. Sharp enough to rend through flesh. Tux hated walking too close to Jackie’s black talons.

Jackie opened one eye to regard Nat. In response to the fourteen year old girl’s words, the dragon puffed out a stream of warm steam from its wrinkled nostrils. The steam was thick as smoke and easily mistaken. Tux leaned out of the basket and tried to swipe a paw at the steam but failed. Too high up.

Talking was something Jackie didn’t do much of. Unless the dragon was want to complain. Part of Nat suspected Jackie resented Nat’s parents for making the dragon sleep in the shed. Her parents were still mad about the night the dragon crashed down on to their family’s land. The barn’s roof was still not repaired.

These days Jackie spent most of his time sunny his yellow belly, sleeping the days away, and playing backgammon. That was the only reason the dragon tolerated Nat–or so the girl believed. He needed a partner to play games against. So he had taught Nat games and taught himself to abide her presence.

“I learned about the Tang Dynasty today in World History class,” Nat told the dragon, impressed with herself.

The dragon huffed and flicked a couple talons. “You read about Tang. I lived the Tang.”

Nat scrunched up her nose.

The dragon went on in his deep, smoky voice, sounding like a regretful but lifelong cigar expert. “I even remember Shang. How I mess the enlightenment. Not this country backward squalor.”

“It’s not so bad here,” the girl retorted pleasantly.

“Says the girl who’s known no better than her present circumstances.”

The dragon rolled over. Scratched its belly. Yawned. A black tongue uncurled, flicked. Nat swore she saw a flame at the back of Jackie’s throat, burning like a furnace.

Leaning her folded arms across the handlebars and resting her chin atop, Nat blinked at the dragon and smiled. “Wanna play a game?”

A wave of a taloned hand. A reddish scale flaked off with the movement and the dragon cursed in Chinese. At least, Nat thought what Jackie said was a bad word.

“After homework then,” Nat offered.

“Let me guess…” Jack sighed and more smoke steamed from his deep throat “… you’d like my help?”

“I’d be most appreciative.” Nat nodded. “You can tell me about Tang.”

Grudgingly, the dragon nodded and sighed once more. All as Nat peddled up to the house to tell her mother she’d gotten home and to drop off her bike and Tux. The two intelligent creatures could never agree on who was right or smarter. Better to leave Tux up at the house with a saucer of milk.

Three high school teens in the woods on a Friday night… some beers… skaters with a grudge… what could go wrong? Add in a couple of genetically created … END_OF_DOCUMENT_TOKEN_TO_BE_REPLACED

A dark short story about one man’s oversight concerning his death.  Since dying was just not part of his daily routine, the man just went on with his … END_OF_DOCUMENT_TOKEN_TO_BE_REPLACED