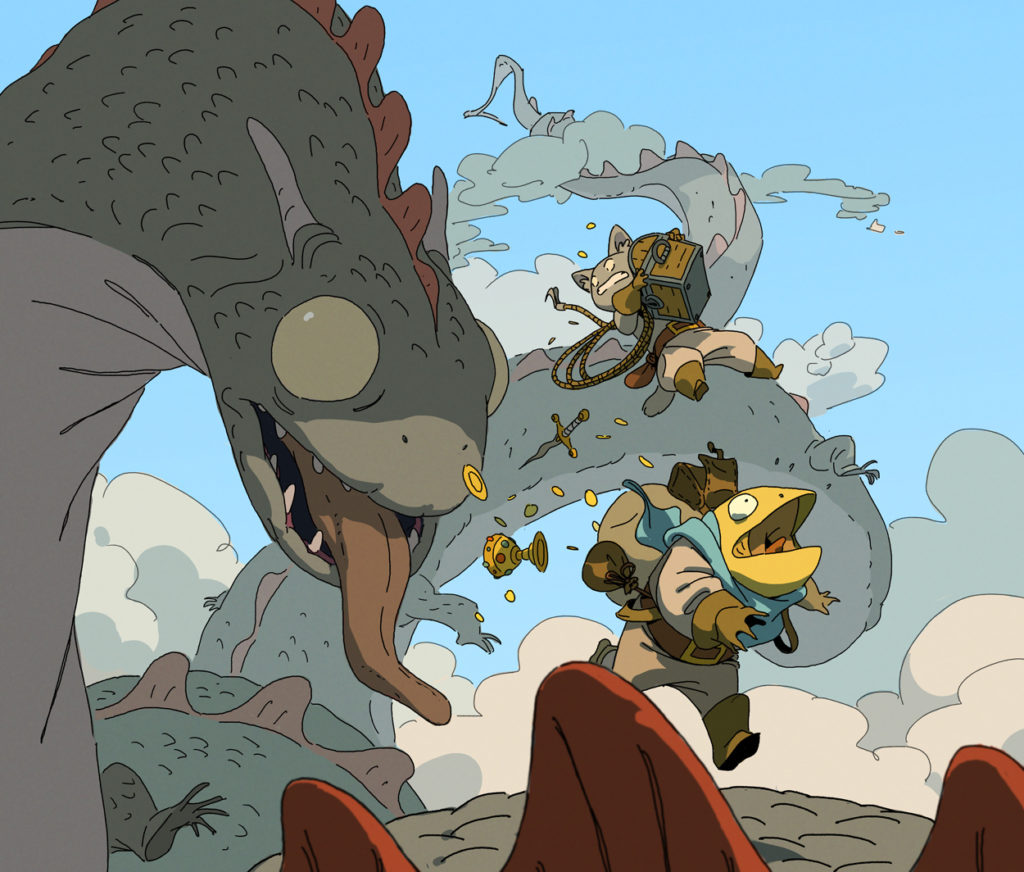 Treasure Hunters by Varguy via DeviantArt

“Not Worth the Trouble”

The ground writhed and rumbled underneath Mouth’s feet as he ran for his dear life. Behind him he heard the clink and ting that made him stutter step, hesitate. He almost turned back. Then the ground kicked up and Mouth’s brain found reason again.

He jumped over pits in the ground. Weaved around larger divots in the craggy, dry surface. Several growth flaps hit Mouth across the face as he ran past. Those he’d previously mistaken for dried out brush, almost like seaweed, upon his stepping from his boat and onto the tiny island. Little did he know…

Huffing. Purring. The calls of exertion and panic grew louder to the holes in the side of Mouth’s bulbous yellow head. He was either slowing down or…

Spoticus tore past Mouth. In any foot race, no one usual beat Spoticus’ four paws. Not by a whisker. Today the tabby was running on his forepaws. Clutched in his front paws was a chest. Locked. Heavy. The partners had tried to open it, to pick the lock with Spoticus’ delicate tools, but the ground began to rumble and the two realized their error quickly and ran.

On his back, Mouth’s backpack slapped, heavy laden. More trinkets and valuables tumbled out of his stuffed-full burden.

“Don’t leave me behind!” Mouth croaked, nearly out of breath, as Spoticus ran ahead of him.

In the distance Mouth could just make out the boat he and his partner had rented earlier in the morning and rowed to this gods forsaken patch of hell.

“Then run faster, Mouth!” Spoticus called behind him, over a shoulder.

“I’m running as fast as I can,” Mouth told his partner between gasps of air.

“What?! I’m carrying the stupid chest. What-what are you carrying you toad?”

“At least I know what I’m carrying! We don’t know what’s inside–”

“Rocks are heavy too.”

“What idiot would lock up rocks inside a chest?”

“Same idiot that would leave a chest on this so-called island.”

“Right? I salute him and offer him a saucer of milk for his genius.”

“We’re running for our lives!” Under his breath Mouth added, “Who’s the idiot here, huh?”

The tabby running on two legs and carrying a chest of hopefully treasure, hissed with annoyance. “Mouth, is this really the time to worry about the time of day? If you get out of here I’ll buy you lunch, dinner or whatever meal it’s time for!”

A shadow drew up overhead, eclipsing the ground beneath Mouth.

Mouth croaked. His long pink tongue shot out and slapped his face, licking away salty sweat, moistening his thin lips from earhole to earhole.

Spoticus was want to go on with his tirade about Mouth’s sudden obsession with the time, asking the really relevant question about why at noon was the sky darkening like the night! Except the tabby suddenly realized Mouth’s concerns. The shadow had caught up to the bipedal feline, swallowing him in ominous shade. Spoticus’ triangle-shaped ears drew back and pinned themselves against his skull. He didn’t dare look back. He knew the danger.

“Right there!” shouted Spoticus. “The boat. The boat!”

They were a short handful of moments away from the shore and the little dingy made for two.

Not two strides from that hopeful moment, the two partners’ world exploded with a rage-filled honking, a shrill call tangled with anger, frustration, and malice. The call set the ground quaking, the very air shaking. Both Mouth and Spoticus fell to their knees and cried out in pain. All treasure in Mouth’s pack spilled, raining down over his head and shoulders. Pearls. Coins. Goblets inset with gems. Sold-gold dishware. Orbs swirling with misty magic.

Picking themselves up, turning over, the partners looked up.

Above them, filling the sky, was the head of a creature. A creature with a neck sticking out of the island’s ground, the ground that coiled around and led from the head of the creature to its tail creating the island’s the shore.

“I told you the map didn’t show an island,” Mouth said. “That should’ve been a our first clue. Damn–” He croaked again, a hiccup of fear “–it, Spots!”

The creature–the island–that lived in the center of the sea, that had slept dormant with a bundle of treasure at its center for longer than record, turned its massive head this way and that. Its blind eyes saw nothing. Its flared nostrils sniffed. Its tongue stuck out from its wide mouth filled with tiny jagged teeth as if tasting the air. Mouth saw wicked barbs on the end of the serpent’s tongue, like harpoons. The ferns along the serpent’s back, sticking out of the spine–or fins if you like, the same growths Mouth mistook for foliage early–shook with agitation.

“The other map did show an island,” Spoticus corrected.

“The other map drawn by a half-mad drunkard with a peg leg, one eye, one tooth, and crazied bird on his shoulder,” Mouth reminded his partner. “All the bird said was “Don’t trust em, don’t trust em”. That should’ve been our first clue.”

The creature’s horns perked up and it drew its tongue back in its mouth.

“On three we’ll run,” Spoticus said, starting to count. “One…”

Mouth drew in a lungful of breath and grabbed the straps of his now empty pack.

The creature’s head moved in the direction of the two partners and stared sightlessly down at them, its tongue sliding out and wagging.

Both partners leaped to their booted paws and webbed feet. They shot off then. Mouth nearly tripped over his forgotten spoils, kicking finely crafted cups, coins skidding. Spoticus still held the chest and barely kept pace with Mouth as they drew closer to their rented boat, the ground growing taught underneath them, the creature pulling back momentarily before striking swiftly for the adventurer’s escaping across its scaly, dry hide.

Hungry honking rushed after the pair, echoing from a long gullet, air stinking of rotted fish and stagnant sea water.

Mouth gulped down air and thought to himself for the last time, This was so not worth this trouble.

Humid, putrid darkness closed around Mouth as be began to scream and croak.

Three high school teens in the woods on a Friday night… some beers… skaters with a grudge… what could go wrong? Add in a couple of genetically created … END_OF_DOCUMENT_TOKEN_TO_BE_REPLACED

A dark short story about one man’s oversight concerning his death.  Since dying was just not part of his daily routine, the man just went on with his … END_OF_DOCUMENT_TOKEN_TO_BE_REPLACED