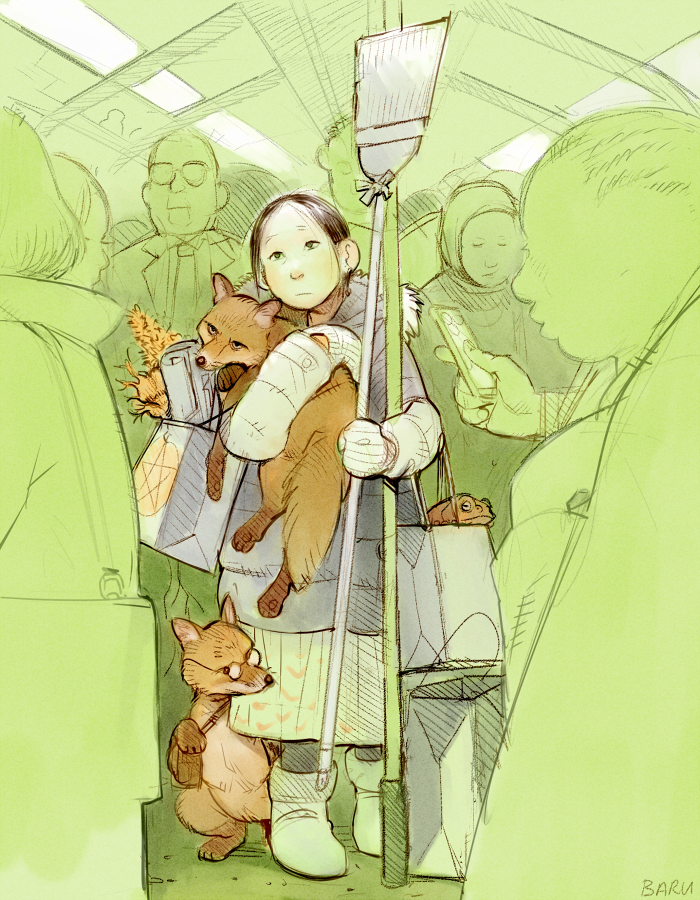 Urban Witch by barukurii via DeviantArt

Overhead the store’s entrance announced Mia’s exit with a sharp ding. Followed by a whoosh as the two doors slid open.

Mia walked out of the convenience store and the chill of winter blew across her body. Sharp. Teeth chattering. The sixteen year old girl rolled her shoulders and huddled within herself.

In her hands Mia carried two bags of groceries. Neither was stuffed full. What she had bought had been few and cheap, the leftovers on a lonely rack at the back of the store with a sign marked Clearance.

At least the store’s honest about the two-day old loaves and biscuits, Mia thought to console herself.

She looked up. Looked past the filthy-defused lights of the store’s awning. Gazed at the darkened night’s sky. Through the white puff of her warm breath battling the evening’s cold. A wracked sigh of exhaustion washed over her and Mia wanted to sit down. The day had been long. The sun hadn’t peaked up before she’d started cleaning Ms. Winslow’s place and when she’d finished the sun had already retreated.

Then she looked around. Left. Right. Left again.

Somewhere inside the store, the attendant at the counter–a pock faced youth a few years Mia’s senior–called out at her with annoyance. “Oi! Get! You’re letting the cold air in.”

Mia’s shoulders touched her ear lobes sheepishly. “Sorry,” she called back quietly as she moved forward to the curb outside the store.

Another ding and a whoosh. Just before the doors snapped closed Mia heard the store clerk mumble, “Stupid witches.”

Her heart sank and Mia sighed.

Once more she looked Right. Left. Right once more.

Where did I leave my broom? She remembered setting the tool next to the door, against the wall, behind some metal boxes holding the daily news spread.

Laughter taunted Mia as she continued her search for her broom.

She spun around to the source of the hilarity just as words flew at her. “Missing something… witch?”

Two boys and a girl peeked their heads out from around a corner, from where the lights under the store’s awning didn’t reach and the shadows were thickest. One of the youths spun Mia’s broom in his hands.

“Lookin for this, witch?” the boy holding Mia’s broom said. He spat the name witch, as if it tasted nasty.

“That’s my broom,” Mia said to the group.

The girl in the group rolled her eyes. “Of course it is, witch. Your a witch. Only witches carry around brooms.”

The three youths advanced on Mia, solidifying from the inky murk of the shadows on the side of the store. All three looked younger than Mia by a few years.

Mia took a step back. Behind her the sliding doors opened. Ding. Whoosh.

From within the store she heard: “Cold air. We reserve the right to not sell to people who let in cold air!”

Mia sucked on her teeth. She clutched her bags close to her chest, puffed up with an old, patched overcoat. She took a step forward again.

Something hit Mia in the shin. Her broom. The boy who held it whacked her with the bristly end as if she were a rat.

“Is it true… Do witches eat kids? Do you eat kids, witch?” asked the boy holding her broom hostage.

“Eww. That’s gross,” said the girl in the trio group.

“Shut up!” the girl he’d called Marley said. She hissed at her friend. He chuckled and dusted off the reprimand.

“Whatcha got in the bags?” The boy with her broom used the non-bristle end of the broom to push down on the top of Mia’s brown paper bags and to look inside. The motion was so sudden Mia started and dropped both bags. The contents spilled across the concrete.

“Probably stuff to make a kid stew!” the other boy proclaimed with a laugh. He sounded like a rapid hyena.

The girl named Marley looked dubiously at the other boy and crossed her arms. “How would you know what’s in ‘kid stew’, Ralph? Are you a witch too?”

“Can I just have my broom back? Please.” Mia hunched down and started to gather the spilled contents of her bags back into the paper bags.

Another whack. This time to Mia’s head.

On the opposite side of the store from where the three youths had hidden while waiting for Mia to come out, a crash rang out.

The three youths looked up, their chiding and teases ceasing for a moment.

“Probably some hobo,” the girl remarked, not sounding confident.

“We should get going,” the other boy suggested, his laughter gone completely. The situation wasn’t funny anymore, apparently.

“No!” exclaimed their leader, the boy with the stolen broom. He hit Mia again. This time slamming the broom into her chest, bending the bristles awkwardly. “We’re not leavin until we teach the witch to stay out of our neighborhood.”

He wound up and readied to swat Mia like an unwanted rat in the pantry. But before the boy could land the blow…

Mia threw up her hand, murmured some words of power, and heat spread out from her hand. Fire licked the air. Around her, the area heated up beautifully.

The boy with the hostage broom stumbled back, nearly lost hold of his stolen weapon. He looked around, confused, angry. He pointed at Mia and wagged his finger. Words failed to leave his flapping lips.

“See that! Did ya see? She tried to kill us!” the girl was hysterical.

The other boy and the girl grabbed Mia’s wrists, Mia lost hold of her bags. They proceeded to pull her arms apart and presented her to the boy with the broom. He inturn stepped up again and wound up his next swing after testing the angle to the side of Mia’s head. “Batter up!”

Everyone laughed. Except Mia. Except the fox leaping over Mia’s shoulder, jaws open, strings of saliva trailing back from its bared teeth.

The boy with her broom retreated too late.

The fox rammed its orange furred head into the boy’s chest and he dropped the broom.

Mia concentrated. Whispered words of power. And spread her magic forcibly out from her. The girl flew off her feet and hit the asphalt parking lot hard. The other boy flew into the store, the doors opening for his passing.

“In or out,” said the clerk lazily. “Cold air stays out! What’s so hard about that?”

Mia grabbed up her broom and pulled it protectively to her chest.

The other boy named Ralph and the girl Marley shakily kept their distance from Mia while the boy who’d held her broom hostage kicked at the fox and scooted away on his butt when the fox finally jumped off of him. The boy’s coat was torn and ripped. There was blood smeared across his face along with three shallow gouges. Lucky for him.

Mia’s three attackers exchanged looks. Then they looked at the fox, its hackles raised in defense and biting anger. All three of the youth’s ran. Some feet hit puddles. One foot slipped on some ice. Whoever had slipped cried out in pain as he or she thumped to the pavement but that person quickly  picked up themselves up again and was lost in the distance.

In front of Mia the fox watched her attackers go, still poised to pounce if they double-backed.

The fox sat back on its haunches like an obedient dog but also like a dignified cat. It sighed. “Nothing more than uncouth ruffians. Superstitious at the best.” It’s pointed snout turned down and two glowing eyes regarded Mia. “Are you alright, girl?”

“Your broom–” its pointed snout jabbed at one of the hands holding her broom, nudging “–has seen better days, no?”

Mia inspected the broom. The bristles were bent in all different directions, some where loose too, all like broken and floppy fingers.

Three high school teens in the woods on a Friday night… some beers… skaters with a grudge… what could go wrong? Add in a couple of genetically created … END_OF_DOCUMENT_TOKEN_TO_BE_REPLACED

A dark short story about one man’s oversight concerning his death.  Since dying was just not part of his daily routine, the man just went on with his … END_OF_DOCUMENT_TOKEN_TO_BE_REPLACED