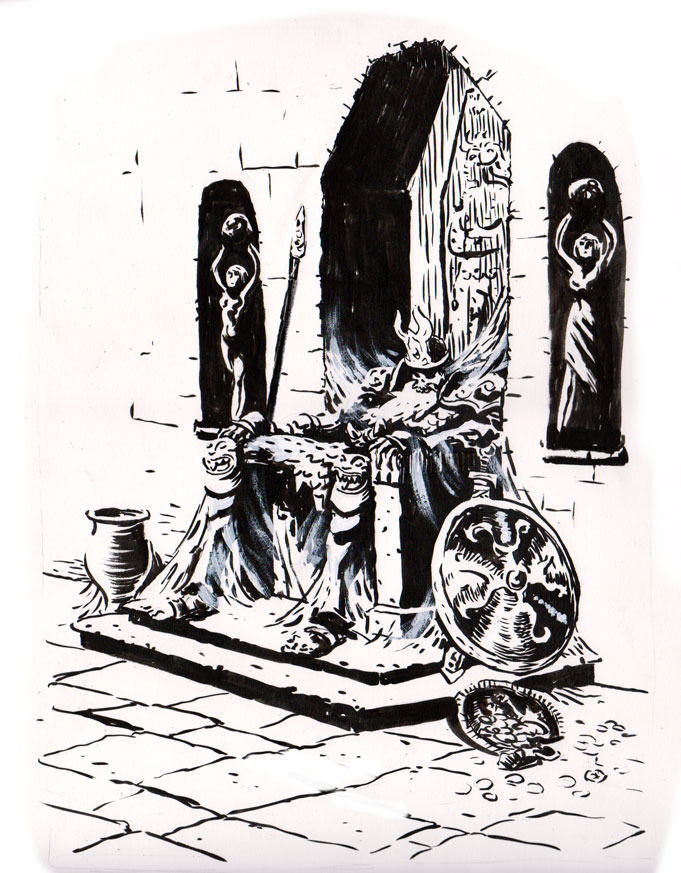 The king by wallsofwoe via DeviantArt

Scorched land greeted Percy as he road his tired, slumping horse to the only place he’d ever called home: the Castle.

Trees as tall as the giants in the north had circled the kingdom’s capital when Percy road from home. Now forest was only roots and cracked stumps. Where once people tended fields of golden wheat, black earth signaled hungry seasons. No fires ate up the land. Not anymore. There was no land to consume, not anymore. Yet Percy could smell the blaze that clogged his nostrils, like the lingering odors from last night’s meal. Except, none of this felt recent. The kingdom’s downfall felt… ancient. But he’d not been gone that long. And if he had, the land would’ve grown back. Right?

How long have I been away? Percy answered his own questions out loud. “Too long. Much too long.”

As his horse ate up the last miles of their journey, Percy’s worry built. Consumed him as the blazes had torched the land he’d loved.

At one point he thought his horse might not finish the journey, that he’d have to complete the last league or so on foot. The sack lain over the horse’s rump dragged low. The leagues behind him even more so. But then the Castle came into the view.

The sight of the towers and parapets brought renewed vigor. Percy lashed the horse with his reigns and beast cried out in protest. Another whip of encouragement and the horse reluctantly clopped on faster.

Percy’s heart soured as the last miles turned into hundreds of yards.

Even the lack of people on the seemingly abandoned road didn’t detour Percy’s enthusiasm.

Everyone waits at the Castle. They wait for me. I’ve brought the cup. The land will heal.

But then he saw the drawbridge lowered. Felt more than heard the lack of laughter and festivity. It was the same feeling sailors encountered on the open sea, when the wind was less than a breath, the current still. What’s worse, parts of the Castle’s wall was crumbled.

Percy shook himself, cast away his lingering doubts and reality. No. They’re waiting for me.

Percy lashed his horse. The horse stumbled but complied underneath its master.

Over and past the drawbridge, below the mot dry, knight and stead found the waiting courtyard empty. The only occupants around were the straw dummies in the practice arena. The only sounds shouted from Percy’s memory–of the striking of steal from the forge off in a corner, children playing, servants going about their business and gossiping.

He didn’t dismount. He didn’t slow his poor, tired nag. He road the faithful beast through into the greathall.

No torches were lit. The sconces on the walls and on the pillars holding up the arched roof had long burned low and out. Puffs of dust rose up tiredly underneath the horse’s hooves as Percy urged the beast forward. Glass crunched underneath the hooves too as Percy drew closer to the dais at the back and its throne. Above the glass panes in the roof were punched in, letting in the orange light of the failing day.

Percy saw him as he allowed his eyes to drift down.

Atop the dais, in the throne there, sat a figure. Percy knew the crown about the figure’s brow and the bear fur slung across the figure’s shoulders.

“My liege! Oh, God has mercy, you are here!” Percy shouted and bound off his horse, scooping up the sack from behind him as he went.

Beyond Percy’s notice, the horse collapsed against the dusty tiles and wouldn’t rise.

Percy loosened the sack’s drawstrings, thrust his hands inside the burlap, and pulled out a cup. Made of clay. Chipped. Well worn. Misshapen. Made for a pauper and not a king of kings.

Holding out the cup, Percy bowed and fell into a supplicating crouch at the foot of the dais and throne.

“I’ve returned, my liege,” Percy implored. “Many miles I’ve traveled. I fought off a dragon that breathed icy fire. Trolls larger than I tried to cook me. I even was indentured to an army to pay for my passage across a bridge!

“But I found the tower on the hill overlooking the coast. At the top was the cup. Here, sire! As you wished. The Grail is yours…”

In both hands Percy presented the pauper’s cup and waited.

The king didn’t reach out, though. The king said not a word.

Percy slowly raised his head with fear and looked up.

The figure sitting in his king’d seat was a pile of bones. The skull wore the king’s crown. Across bony shoulders lay the bear’s fur.

Around him, Percy looked, and saw for the first time the other piles. Bones littered among rusted armor sets. Torn tabards like his own, each with a familiar sigil. All as if paying last tribute to their king.

He looked back up to his king.

The skull leered at Percy and taunted him with an empty grin. “Too late. Should’ve gone faster. Should’ve… done more.”

Next to his bent right leg, the cup fell from Percy’s grip. Another small piece broke off from the uneven rim.

Percy wept. Hands holding his face. His armor just as rusty and creaking as the plate and mail among his brothers’ bones.

Three high school teens in the woods on a Friday night… some beers… skaters with a grudge… what could go wrong? Add in a couple of genetically created … END_OF_DOCUMENT_TOKEN_TO_BE_REPLACED

A dark short story about one man’s oversight concerning his death.  Since dying was just not part of his daily routine, the man just went on with his … END_OF_DOCUMENT_TOKEN_TO_BE_REPLACED