Jon, George, and Alice are back along with their hybrid companions Bo, Trick, Peppy, and Isis. Back and on the run. Mauser’s soldiers and their own leashed hybrids are also not far behind.

The second installment in The Our Monsters Chronicles, “Bad Monsters” drops in late March 2014. It’s been more than a year in the making and I’m excited to show readers the next stretch in the adventure of Jon, Bo and their friends. Jon and his high school friends discovered their parents–soldiers and scientists in the U.S. Army–were splicing together the genes of animals with a mysterious alien creature to create hybrids endued with super powers. After a betrayal of a friend, the death of one of their own, and liberating the hybrids from the bonds of the military, the teenagers and hybrids are on the run. They hope their course is to safety but with four more books in the series remaining I can promise that many more dangers and trials are ahead. 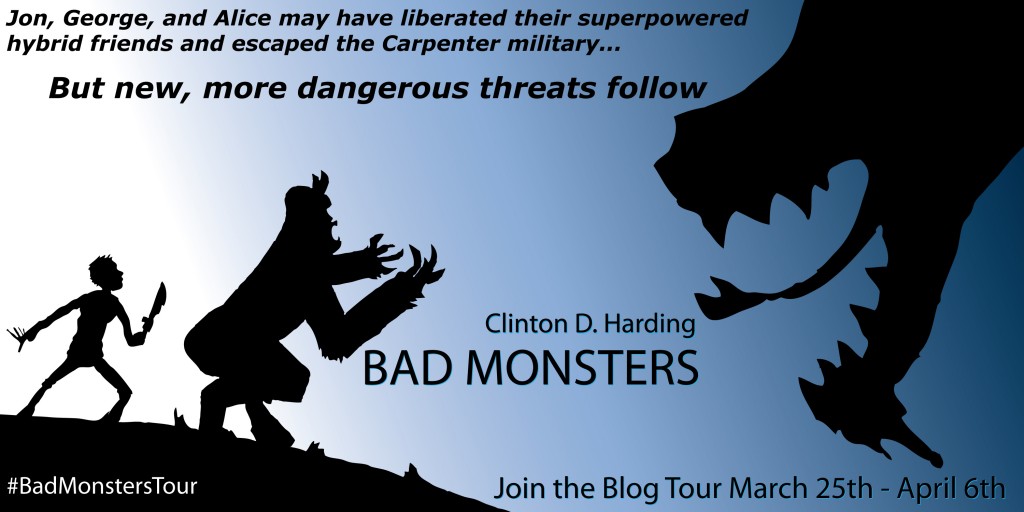 To celebrate the release of “Bad Monsters”, the novel and I will be visiting a grip of wonderful blogs that want to help spread the word about the series and the novel’s release. The tour will run between March 25th through April 6th. For more info about the tour check back here, my Google+ and Facebook accounts. More information is coming.

Three high school teens in the woods on a Friday night… some beers… skaters with a grudge… what could go wrong? Add in a couple of genetically created … END_OF_DOCUMENT_TOKEN_TO_BE_REPLACED

A dark short story about one man’s oversight concerning his death.  Since dying was just not part of his daily routine, the man just went on with his … END_OF_DOCUMENT_TOKEN_TO_BE_REPLACED