Not many chapter are long. They punch the reader in the nose and let them know what’s up. Like a punch, the first chapter has to have a great impact. A writer doesn’t begin a novel with a bunch of old ladies sitting around a table knitting a quilt all the while humming a church hymn. First chapters set up those initial mysteries that the reader want answered, the questions. First chapters give us glimpses of characters, their fears, their weaknesses, and sometimes sneaky writers will show the false facade of a character to do a magician’s misdirection trick to keep a character’s true self hidden.

That said… As important as those first chapters are, sometimes the opening lines of a novel are more important. Opening lines are the inspirational stay with you narrations that will stay with a reader not just for the 200 pages in a novel but… well… forever. The line will epitomize a writer’s work, a genre, a time period. Opening lines have staying power the same way song lyrics do. They get stuck in your head and you don’t mind because you’re in such awe of those moments the lines, the lyrics, the scenes in movies just they shake you.

Think about those first moments in ‘A New Hope’. The Star Destroyer crawling into the frame. Massive. Intimidating. Inescapable. You understand in the next scene why C-3PO is having a motherboard melt down. What type of person commands such fear from and harries a neurotic and innocent droid like C-3PO?? Darth Vader! That’s who. That Star Destroy’s entrance, that opening, is powerful.

This is what people mean when they speak of ‘iconic’. Opening lines, opening scenes are iconic. Another iconic opening is the James Bond gun barrel scene. After six Bonds and and 50 plus years, the gun barrel scene remains relatively unchanged, the theme music the same.

The opening line in a novel can and does evoke the same emotions and long lasting impressions.

One of the best opening lines, the one that sticks with me, the line that makes me want to pick up that novel right now…

“The man in black fled across the desert, and the gunslinger followed.”

Stephen King. “The Gunslinger”. The first installment of The Dark Tower series. The line speaks to King’s character Roland of Gilead. A knight of ol’ who instead of carrying a sword has a pair of six-shooters with sandlewood grips slung on his hips. Roland is on a quest. His obsession drives his journey. Only an obsessed man with a tortured past treks across a wasteland after a single man. And who is this mysterious Man in Black? What has he done to set off the Gunslinger who pursues him? What type of creature would an Ol’ West knight chase?

Think about those opening lines that echo through your own memory, that draw you back to your favorite books. 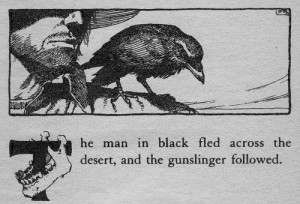 Interesting enough, Fantasy Faction did an article about this very same topic. They have a great long list of some of the best opening lines in fantasy and science fiction. Hey! The opening line of “The Gunslinger” is listed there! Check out Fantasy Faction’s article for more great novel openings (click here).

Three high school teens in the woods on a Friday night… some beers… skaters with a grudge… what could go wrong? Add in a couple of genetically created … END_OF_DOCUMENT_TOKEN_TO_BE_REPLACED

A dark short story about one man’s oversight concerning his death.  Since dying was just not part of his daily routine, the man just went on with his … END_OF_DOCUMENT_TOKEN_TO_BE_REPLACED