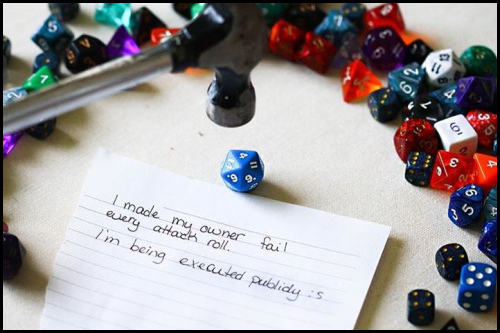 Anyone who plays a campaign with me knows I can’t roll if my character’s life depended on it. I’m the guy in the party who makes everything worse despite his good intentions. And everyone at the table knows my luck.

Nope. Those are Clint’s dice. Not touching those.

Case in point. One Sunday about a month ago. My group started a new campaign in a game we’d been planning for some months. I believe after several scenes requiring no rolling, just conversations and interactions with NPCs meant to get the party on the roll toward action (no pun intended), my rolls were the first. I was surrounded by a bunch of guards ready stab me with spears or pikes or something pointy and very sharp. My guide in the untamed wilderness had already decided to ditch me just because of some signs on gate expressing ‘Danger-Danger’, her tribe’s superstitions, and her racism toward mutants… namely me. I rolled three times. Three times in order to accomplish the end goal of keeping myself bloody-hole-free and convince my bigoted guide to get me further along on my dangerous journey.  Each roll I failed. Each fail only dug me into a deeper hole. I’m lucky I didn’t die. In the end I only ended up lossing my guide–nothing could convince this chick to walk beyond the ‘Danger-Danger’ sighs or to ignore my mutant-ness–and I was forced to move forward on my adventure alone.

My luck is so bad that no one wanted to touch my dice. My other party members knew the dice were tainted. In the next three hours or so the rolls only got worse. I’ll spare you the details.

My point in this ramble is that my failures and blunders through the game made things interesting for the game’s story. Succeeding with my rolls would’ve made the game predictable and would’ve not allowed myself or my party to think around problems or to have avenues in our larger story that no one could’ve planned.

Storytelling in a novel or in a game–video game or tabletop–or on film depends on the unpredictability of the characters and their situations. Characters attempt to forge past obstacles, fail, get themselves into further trouble, create relationships, learn, grow, change.

This is not a new adage. That we learn through our stumbles more than our successes. Characters learn the same way, either that way or by the divine intervention of a writer’s meddling imagination and ink-filled pen, like a sudden lightbulb clicking on over his/her head. Even so, the character must be brought to a realization about his/herself or the world through trials otherwise the new knowledge/experiance is unearned. Not interesting. Boring. This is why storytelling frequently draws upon the quest trope. Hero strikes out for a magical item in a far away lands, leaves comforts of home behind, encounters dangers, gathers friends, heads into more danger, find magical item, and magical item blows up in said hero’s face!

Forks in the road are for more interesting than the straight and narrow.

What I’m trying to trying to do here is make myself feel better for continually being a guy who fails at rolls in every game he plays. At least I make for good story fodder. Yeah. Yeah, I’m going to get telling myself that. Your character learned something! The story is better for your failure! Yea… yeah.

Three high school teens in the woods on a Friday night… some beers… skaters with a grudge… what could go wrong? Add in a couple of genetically created … END_OF_DOCUMENT_TOKEN_TO_BE_REPLACED

A dark short story about one man’s oversight concerning his death.  Since dying was just not part of his daily routine, the man just went on with his … END_OF_DOCUMENT_TOKEN_TO_BE_REPLACED