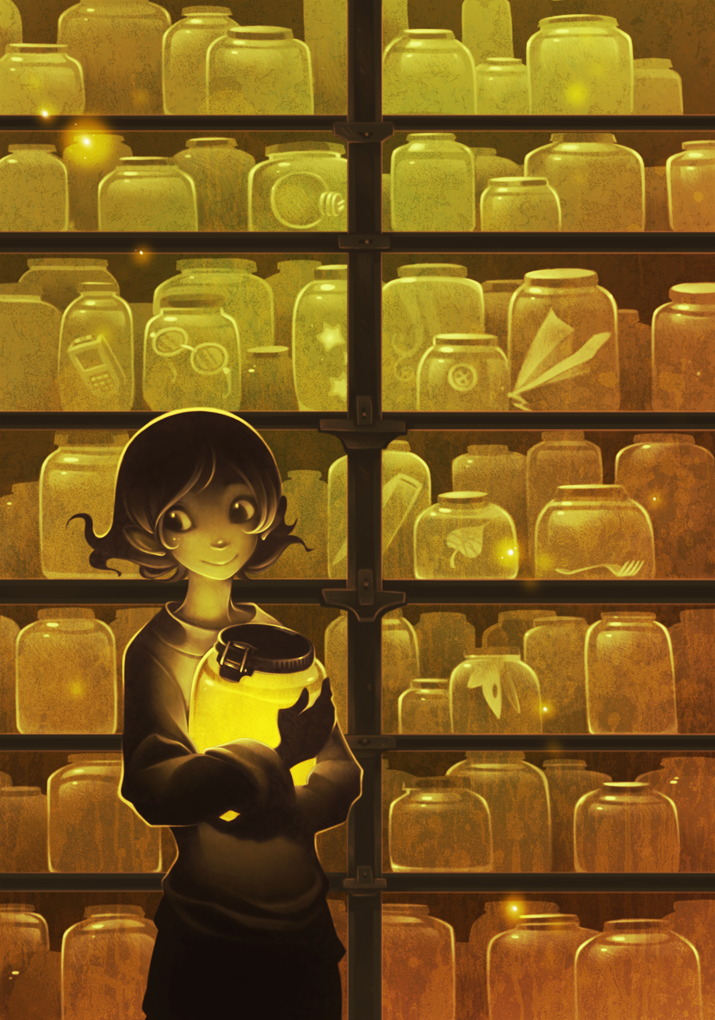 Remnants by shirotsuki on DeviantArt

“Treasure in a Jar”

The pair of spectacles sat on the bench, forgotten, lonely, yet with the sunny impression of past usefulness.

Shelby looked around the park. A concrete path wound itself passed the bench. Grass fields butted up to either side of that path, the spectacles observing one of the fields where a pair of boys older than Shelby’s fourteen played catch with a football. Next to the bench a trashcan overflowed with fast food wrappers, brown paper bags–both greasy and stained–and empty cups with lids and straws bent at the tips from gnashing teeth.

One of the wrappers from the trashcan got teased by a passing wind. That wind tugged and eventually freed the wrapper printed with dozens of golden arches. The wind carried the wrapper away. Shelby shielded her eyes against the afternoon sun and watched the fluttering wrapper transform into a paper pigeon and fly against the cloudless blue sky.

On the bench the spectacles couldn’t be bothered with trival matters such as paper birds. The spectacles were content to watch the boys lob the football back and forth.

One of the boy’s missed the football. His fingertips barely grazed the leather skin of the ball. The ball slipped through his grasp and tumbled across the grass in a wobbly, haphazard way. What stories did that football contain? Dozens of pick up games. Pitches in the rain. Rolling around the mud. Days carried home as the sun slipped over the horizon. Nights stowed in the corner of a boy’s room.

Shelby shook away the thoughts clogging her brain. The football was in good hands. Would have many more memories.

She took a seat on the bench next to the spectacles. But before planting herself, she remembered her manners. She stood up again. Curtsied. Gave the pair of spectacles a sweeping bow. Then she sat for a second time, swinging her backpack off one shoulder and down to her feet.

She leaned over across the bench and down at the spectacles. “What brings you here today?”

No response. Then again Shelby didn’t expect the spectacles to get up and belt out a song for her or recite poetry. No. When the time was right they would show her their stories.

“Are you lost?” she asked, looking up and down the jogging path. She was nervous, probably about as much so as she would be talking to boy she liked. It was after school. Any business people from the towers outside the park would’ve come and gone already, having eaten their lunches, enjoyed the warmth of the sun on a cloudless stage, having shoved their garbage in the can next to the bench before going back to their jobs. One of those someones had forgotten their glasses here.

Shelby’s back went rigid, hands clasping together. Her cheeks grew hot. Her eyes darted this way and that. She grew aware of the gentle wind brushing though her short bob of strawberry hair. Still nervous, she tugged her sweater’s hem and darted her gaze back down at the spectacles.

Whispering she said, “Listen. I’m not some strange person. Not really. But I notice you’re all alone and filled with Remembering.” Outraged she stamped her feet. “I assure you I’m not trying to pick you up! And I’d never touch without permission.”

She knew she shouldn’t touch, not without permission from the owner of a Remembering. Her aunt had explained to Shelby that snatching away a Remembering was worse than picking a pocket. Not that Shelby would ever steal anyone’s money. A Remembering? Maybe that she’d take without asking. Shelby argued with her aunt that an owner didn’t even know what they were missing after she took a Remembering. But that is the point, her aunt might say, and it’s a worse crime. The person might know in their heart something was off with the object. That something was amiss, like if the comfy feeling was no longer there. They might never know just what that something was. Only that something was missing. And they’ll know the object is less special now.

Shelby sighed. Tapped her feet. Chewed her lip. She looked across the field with the two boys to the towers filled with adult business.

Is anyone coming back for it? She didn’t think so.

She straightened her back. Pushed out her chest.

Then movement caught her attention.

By now the two boys had ceased their football pitching and had come together. One of them pointed at Shelby. The other laughed, tossing the football in the air idly.

They started to walked toward her with purpose, stomping over the grass with malicious grins that only boys with icky slime in their guts could carve on to their faces.

Shelby made a decision.

“I don’t think anyone’s coming back for you,” she told the spectacles.

She hastily placed a finger on the spectacles and drew in a breath with an effort of will.

A rush of Remembering flooded into her. A toddler grabbing the spectacles from its father’s head, giggling with glee. A women taking the child, flashing a smile, a promise. Long stretches of time stuck between hundreds of cars, away from the mother and child. Weekends filled to bursting with walks in the park. Picnics. Lazy sunny days. Sandwiches. Coke. Smiles. Laughter. Family.

Then the Remembering was with her. Tucked inside Shelby. A glow that warmed her flesh like the surface of a lightbulb.

Ahead of her the heckling duo of boys had only taken a step between her finger touching the spectacles and the Remembering entering her.

Shelby snatched up her backpack and darted down the jogging path, away from the boys.

Shelby ran and she didn’t stop until her lung threatened to burst and she’d reached her aunt’s antique shop.

Behind the counter, helping an old woman with an even older–probably ancient–music box, Shelby’s aunt looked up. She peered at her niece over a pair of spectacles brighter than those Shelby had met in the park.

“Are you in trouble?” her aunt asked with the immediate suspicion all adults seem to harbor for children out of breath and sweaty.

Shelby caught her breath, slowed the quick rise and fall of her chest, and waved at her aunt. “Everything’s fine.”

Her aunt examined her. She probably caught help noticing the slight glow that turned Shelby’s flesh a near bronze.

Shelby rolled her eyes. “They were lost. No one was coming back for them.”

Shelby danced foot to foot. “I-I just… I just know. They were lonely.”

Her aunt sighed and rubbed the bridge of her nose. “We’ll talk about this later. You got homework, I assume.”

Without further prompting–gotta get when the getting’s good–Shelby made her way down to the store’s basement.

Downstairs she flung her backpack onto a table against one wall. The room was dark, the periphery of the underground room the thickest with shadows. The middle of the room was another matter, though.

The basement had a natural glow at its center. A golden bronze. Like what the inside of a honeycomb must look like if held up to the sun.

In the basement were a handful of shelves. All with stoppered jars of varying sizes, shapes, heights. Inside many of them glowed an object each. Objects hovering as if suspended in amber. If she looked closely Shelby could’ve seen right through each glowing object, as if each were made of smoky glass. Cell phones. Paper airplanes. Leaves. Pairs of glasses. Nail files. Hairclips. Rings. Bracelets. Ear rings. Trinkets and leavings. Oddities easily cast away. Expensive items forgotten in careless moments. All Rememberings taken from tangible objects. Pure memories. Observations of life, times, loves.

Shelby went to one of the shelves and picked an empty jar.

She held the jar to her chest, drew in a deep breath, and willed out the Remembering in an exhale of power that beamed and overflowed from own self.

The jar lit up. Warmed. Shelby felt a brief shiver of cold. When she released another breath frost left her lips.

She held up the glowing jar.

Floating inside were the spectacles, same as they had been while watching the boys play with the football. Like all the other items in the shop’s basement, this Remembering was ghostly but in no way lacking in depth of importance.

Shelby stoppered the jar and placed it among the other Rememberings.

Then she stepped away from the shelves to the worktable against the opposite wall. At her back she felt a warmth of color and purpose.

Three high school teens in the woods on a Friday night… some beers… skaters with a grudge… what could go wrong? Add in a couple of genetically created … END_OF_DOCUMENT_TOKEN_TO_BE_REPLACED

A dark short story about one man’s oversight concerning his death.  Since dying was just not part of his daily routine, the man just went on with his … END_OF_DOCUMENT_TOKEN_TO_BE_REPLACED