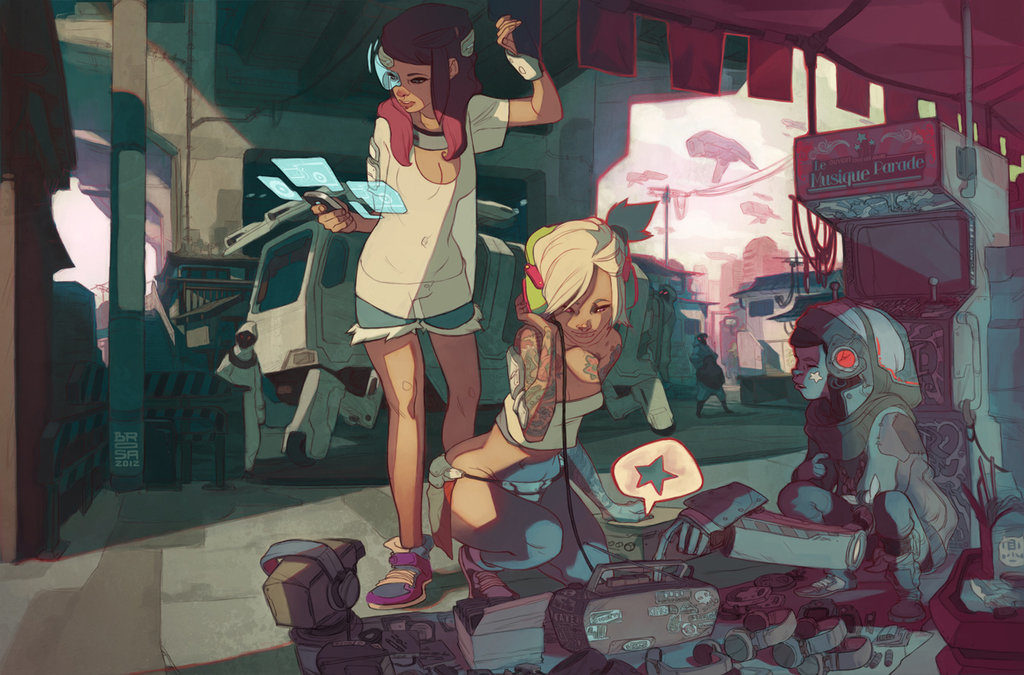 The Retro of Tomorrow by Brosa on DeviantArt

Anda loved Gizzy for her optimism and spirit. Everyone did. While most oldsters sneered and frowned at TechGens, they only saw Gizzy when she walked up, sat down, and starting asking about The Conflict albums, DVDs with Tom Smooth classic flicks, earbuds with cords that got all tangled up, and retro video games in man-sized boxes. Really! Who has the space for a game the size of a hovar? What do you even do with those cords? Only the oldsters remembered what it was like to use your hands to play with a unrecognizable pixel character. Tech for babies if Anda’s opinion mattered. Despite her complaints, Gizzy would simply laugh at her and asked questions to the oldsters. They would talk. And talk. And talk. Most importantly, Gizzy listened to the bags of wrinkles with no inputs.

Deehop always had the most unique junk. Not even Gizzy knew of some of the stuff Deehop sold.

“Whatcha listenin’ to there, Dee?” Gizzy asked, strolling up to Dee’s stall.

Dee had her stall set up in the Grunge, a market under the overpass leaving one of the city towers that rose above the clouds and overpacked the remainder of humanity. It was hot out here in the Grunge. The lack of water in the earth more noticeable under the blistering sun. The only thing that saved Anda and Gizzy from sunburns was the cool shade of the tarp draped over the bleeping, blurping, ring of game boxes that counted as Dee’s stall walls.

Coming down to the Grunge meant also taking a long, boring lift ride. Something Anda never looked forward to.

It’ll be worth it, Gizzy urged Anda earlier today. Dee’s always got the best stuff!

If you’re into that kinda scrap, Anda had shrugged.

Gizzy kissed Anda, a quick playful pick that melted the latter girl into a puddle easily carried around in a bucket.

“Just some June Beats,” Dee replied as she took off a set of headphones as large as two fists. The little junk peddler was not much older than Anda and Gizzy’s seventeen but her voice had the rough tone of someone who’d vaped for forty years and was in desperate need of autotuning. “Classic sound, Giz! Wanna give ’em a listen?”

Gizzy rolled her eyes. “Do you need to ask?!”

Hands held up in a gemme gesture, the junk peddler handed over the headphones to Gizzy. When the latter cupped them over her ears, both sides of her head seemed to disappear. Bulky and useless.

A little bugbit in Anda’s ears feed her Dubbnash’s latest techno-phonic beat. A jam that Anda’s heart picked up and matched with ease, taking her on a swift ride down an empty straightway of hoverway with all lanes clear with the speed turned up.

While Anda’s body vibrate to the synth’ed tones of Dubb, Anda hunkered down and coasted through whatever unplugged funk this June Bugger strummed. Anda had only read about the ocean. On either coast the oceans had receded generations ago, drying up and leaving the world near barren, forcing humanity into the towers where resources were controlled and manufactured down to the last decimal. But watching Gizzy’s body follow along the rhythm of whatever oldster music she was listen to, reminded Anda of stories she’d heard about the rolling ocean. A natural movement that didn’t follow the music but complimented, played off of and commented on the music she was following but all in her own style. She was beautiful, Gizzy. She made that old unplug crap appealing, or made Anda want to try to understand the appeal. Even the oppressive, scorching sun was more beautiful reflecting off Gizzy’s golden locks, cut short around her chin.

Dee bobbed her head to the unheard rhythm watching the undulation and roll of Gizzy’s limbs, the shifting of her shoulders. They shared that music. Understood the style.

An ugly spike of jealousy made Anda’s heart skip and go out of tune with her own synth’ed tones. She felt her body go stiff.

Gizzy reached her hands up to the headphones and slipped them off her head to around her neck. Her body slowly went still then. The music fading. The ocean in her personal rhythm receding.

“Bored already?” Anda asked, hopeful, ready to catch the next lift back up to now’s civilization.

Gizzy waved off Anda’s biting retort. Not annoyed but as if Anda was inconsequential at the moment. A silly distraction. Anda felt her face turn brighter than her red hair and crossed her arms. She tried to look away from Gizzy and Dee but the transaction taking place caught her attention. She stamped her sneaker to move things along. She wanted to take Gizzy and get out of here! She felt her shirt sticking to her ribs, the material stuck to her back.

Dee nodded and shrugged as if saying, Yeah, I know my junk would wet your appetite.

“I’ve gotta have it! How much you want, Dee?” Gizzy pulled out her holoPalm. Several screams blinked open above the device.

Dee shook her head. “Not that simple.”

Shoulders falling, dejected, Gizzy raised an eyebrow, “How so?”

The clunky headphones around Gizzy’s neck were fed into a large black box with flashing lights and bulky buttons, all plastic, scuffed and scared, some pieces chipped. Dee pressed on one of the buttons on the top.

A split second later a tiny compartment popped open at the front of the box.

With her mechanical hand manufactured for a male two sizes larger than her, Dee pulled out a small, translucent, rectangular box. Inside were two spools of wire, tape, or something feeding from one spool to the other.

Gizzy’s eyes lit up. She clapped her hands to her open mouth, her expression one of curiosity, wonder, and excitement. After several heartbeats she pulled her hands away from her o-shaped mouth.

“Cass-it,” Dee answered, scratching her head. She was probably making up the name. Like always. “Something before CDs… I think.”

“And that there, Dee? What’s that?” Gizzy pointed to the large box with all its lights and buttons and chipped plastic.

“Plays the cass-it.” She scratched her head. “Called a toneboomer.”

Anda rolled her eyes. “You gotta be kidding me! Are you really slinging this cra–“

“I’ll take it all!” Gizzy said, jumping up, nearly strangling herself with the headphones. Anda reached out to save her friend but the cord popped out of the so-called toneboomer with Gizzy’s sudden jerky movement.

Dee slapped her hands together. “Excellent! I know where there’s more cass-its. C’mon back sometimes, check em out.”

Gizzy was swiping through holoScreens furiously, already transferring the credits to Dee’s account. She abruptly went still, her eyes slowly rising to consider Dee. She jiggled the headphones around her neck.

With a laugh Dee waved the headphones away. “Free of charge.”

Anda sighed heavily. And she probably expects me to help her lug this junk to the lift with her. What does Dee sometimes say… Oh! Yeah. This is not ‘being excellent’ to me.

Gizzy wheeled around and grinned up at Anda. How could Anda say no to that beautiful bronze face?

Three high school teens in the woods on a Friday night… some beers… skaters with a grudge… what could go wrong? Add in a couple of genetically created … END_OF_DOCUMENT_TOKEN_TO_BE_REPLACED

A dark short story about one man’s oversight concerning his death.  Since dying was just not part of his daily routine, the man just went on with his … END_OF_DOCUMENT_TOKEN_TO_BE_REPLACED