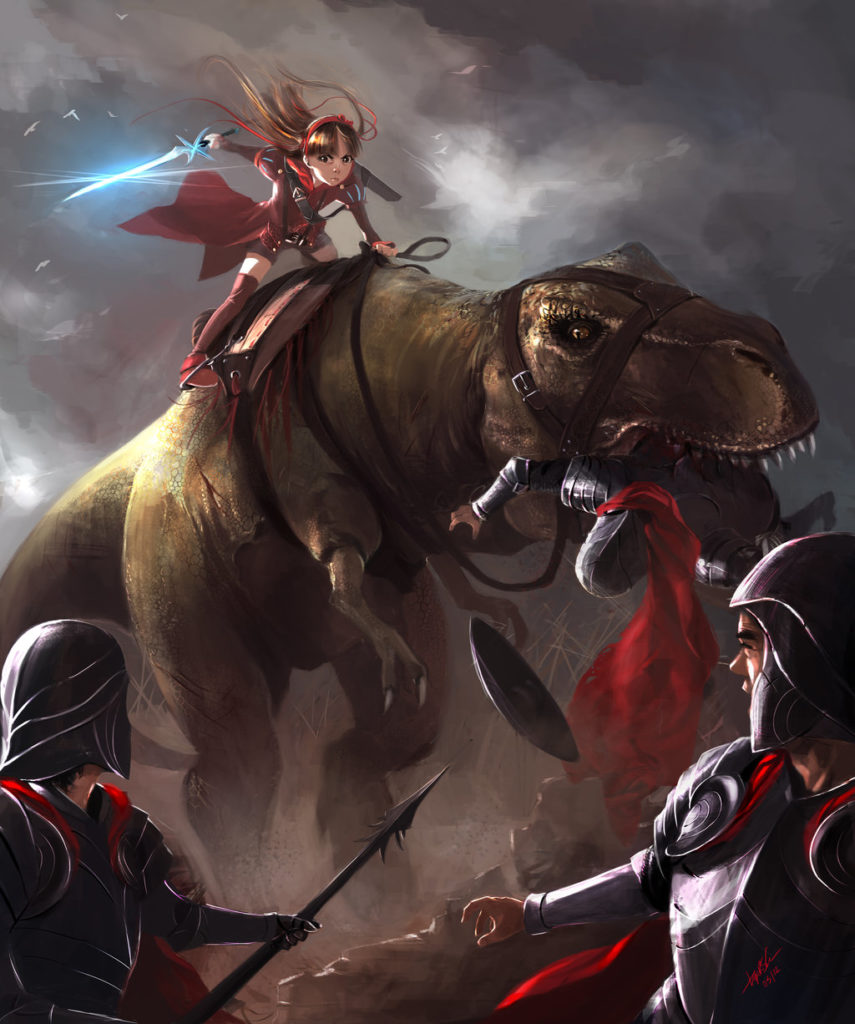 Carola – The Princess and the Dinosaur by DiegooCunha on DeviantArt

“Never Say ‘Give Up’ to a Dinosaur or a Princess”

Princess Analla wouldn’t let them get their hands on her. Not after what those traitors did to her family.

Red flashed before Analla’s eyes. Walls splashed with gore. Pale wood floors soaking to dark. No matter how hard she tried to wake them, her parents, her brothers, her sister slept eternally. Hands roughly pushing her through passages behind the palace walls. Down stairs underneath the halls she’d once played.

Analla rubbed at her eyes. Sniffed.

She was the only part of her family remaining. The last high daughter of the kingdom.

She picked herself up. Drew in a deep breath. Pushed out her chest.

“You have her trail?” someone said. Voice not far away.

“And something else.” Another guard. Worried.

The voices came from just behind a thicket of trees, at the bottom of a steep hill that Analla had cut her hands climbing up, had scraped her knee and torn her dress while sliding back down having lost her grip.

“Something else you say? What something?” There was bravado in the second man’s tone, a thick pungent covering of fear. “Someone with the royal snot? We got the Dedicants. All of ’em.”

A third voice chuckled. “Maybe your something out here ate the girl. Make life easier for all of us.”

Murmurs of assent told Analla a contingent of guards followed these three men. A small army of blades once pledged to her family. Unsheathed last night and edge placed against royal throats. Thrust into the backs of the Dedicants.

Warm air blew against the back of Analla’s neck, tossing her hair forward. A grumble like a hundred dogs nearly shook the ground underneath her. Analla reach up and put an arm over Rexmond’s scalely snot. She patted a flaring nostril. Another long gust of air issued from Rexmond’s nostrils in a calming manner as he laid his head next to the kneeling Analla with a mighty thump.

The guards burst into a chorus of unease laughter.

The disloyal guards had followed Analla into the Thornblood Wood. Beasts of all sort roamed the thicket of trees. It was a place that stretched from the palace’s rear to nearly the country’s southwest border. So many of her father’s annual hunts took place in the Wood.

“Do you got her trail or not?” the first guard asked following a long suffering sigh and face slap.

In confirmation the second guard answered with affirmation, “She’s not far.”

They were coming for her again. Determined to place her body beside those of her siblings. Take her head and display it on a pike like so many displeasing courtiers, petitioners, and criminals her father had found offensive. A practice all the more terrible now that it was her head.

Analla drew her father’s blade. Starfire. A brilliant blade of blue light, the hilt worked into the shape of a five pointed star.

As she gripped the hilt, her small hands slipped into the groves lift by her father’s thick grip. Holding the blade to her face, she smelled her father’s sweat.  Salty. Earthy. It was her father’s laborious musk or her own tears, she didn’t know.

No more crying like a little girl, she told herself harshly.

The voices were rising. The clink and clank of heavy armor. Did she hear hounds too? Barking. She heard the snicker of unsheathed steel. Foliage rustled not far away.

Analla stood and placed a hand on Rexmond’s flat head. His red and green scales glistened with moisture and the stray beams of afternoon sun striking through the treetops. She tugged on his bridle. The leather straps were secure, as were the saddle and the straps underneath Rexmond’s chest. Her father’s saddle. Her father’s faithful mount, having raised Rexmond from his hatching. In the beady black eye that regarded Alanna she saw in the creature a mixture of sad longing and bloody anger.

She took up the reins and kissed Rexmond on his cold, wet nose–just above a top row of dozens of razor sharp teeth–before vaulting into the saddle.

With his passenger secured in the saddle, Rexmond rose to his full height from an almost courtly bow of submission. A massive height of more than two average men.

Underneath the saddle, between her legs, Alanna felt a terrible tremble as Rexmond caught the sent of the men hunting them. No. They were hunting her. They had no idea in their haste to put the royal stable to the torch that they’d freed Rexmond and that he’d found her in the Wood.

Other dwellers of the Wood felt Rexmond’s lust. Knee-tall species scattered at his dominance. Leaping through the underbrush, quick to move around the larger saurus’ ankles. The tiny sauruses rushed unknowing at the coming company of soldiers, keeping their clawed footing as they descended the rocky slope.

Cries of surprise and horror leapt from the startled solders. More than a few grunts of strength too, a number of soldiers attacking the fleeing sauruses.

Standing in the stirrups, her royal coat draped across Rexmond’s knobby spine, toward the base of his thick tail, Alanna raised her sword.

She pulled on the reins and gave the leather straps a gentle snap as she shouted a battle cry.

Feet stomping, earth quaking, Rexmond dipped his head forward and shambled forward. At first his footfalls firm but slow. Within several heartbeats the mounted sauruses gained speed, squeezing himself between the trees. Tail striking and cracking other offending trees who’d not bend to his passage.

Together rider and mount crashed through the trees, leapt down the slop, over several metal helmed head, and into the middle of a contingent of traitorous kingsman soldiers.

Alanna held her father’s sword aloft and screamed the names of her slain family.

She didn’t hold Rexmound back. The saurus roared. Bared his stacked rows of teeth, sharper but deadlier than any blade.

Spearmen leapt and rolled out of the princess and saurus’ path. One too slow. A man’s leg was under Rexmond’s foot when the mount planted. Metal greaves groaned. Bone cracked. A strangled yell waned as pain and the blackness of unconsciousness overtook the man. Rexmond kept his pace. Charging. Crushing.

His tail caught a tree. Struck the stock at full gallop. Wood splintered, scattered, gouging into the exposed necks and cheeks of any man standing nearby.

A daring spearman charged Rexmond’s right rear flank. The man ducked under a tail whip. Vaulted over half a fallen tree. He drew back his spear and opened his mouth to shout, to bury the metal head between two of Rexmond’s scales.

Analla twisted around and swiped down at the spearman with her father’s sword. Starfire cut across the man’s face, leaving a nasty red line of furious flesh and blood, slicing off the tip of his nose, cutting his spear’s shaft in half, sending the pointed head spinning away.

She turned to see Rexmond swoop his head down and pick up another soldier in his jaws. His jaws bit down, the dozens of knives puncturing the armor plating around the man’s torso. The soldier dropped his sword and shield but held on to his wailing pain.

The Wood ran red as the afternoon sun made its slow decent.

Three high school teens in the woods on a Friday night… some beers… skaters with a grudge… what could go wrong? Add in a couple of genetically created … END_OF_DOCUMENT_TOKEN_TO_BE_REPLACED

A dark short story about one man’s oversight concerning his death.  Since dying was just not part of his daily routine, the man just went on with his … END_OF_DOCUMENT_TOKEN_TO_BE_REPLACED