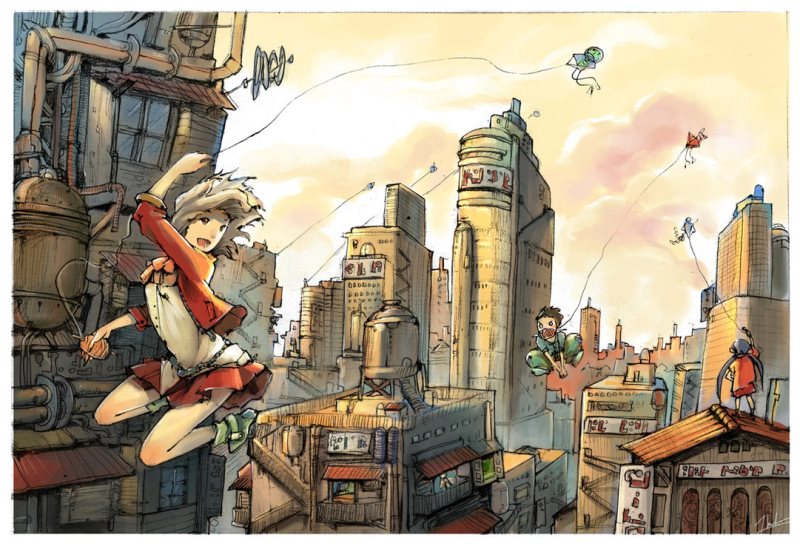 Wind swept through the tight, crowded streets of the Gutter. Streams of warm air carrying the stink of humanity closed in too closely, too intimately. The currents also carried the whooping and hollering of accelerated adrenaline.

Kaylin felt her heart thumping. Barely heard her cries of jubilation as the wind carried her, a gentle hand guiding, pulling her through the city’s alleys and avenues. She was out of control. In control. All at the same time. Riding the edge. And she’d not have it any other way.

Her kite’s bridle tugged. Kaylin felt her arms yank, trying to dislocate from her shoulders. But she rode the current her kite currently cupped. Even when the wind scooped her up and tossed her against the side of a tenement, she didn’t fight the current. She embraced the ride. Flowed. Her boots smacked the wall and her feet churned. She leapt across windows. Skipped between clothes lines. She traversed the wall. Up. Up. Across. Up the third and fourth levels and…

Kaylin pushed off the roof and burst into the open air above the tenement, tearing from the shade, embracing the glow of the day’s sunlight that warmed her flesh.

In that still moment, she was weightless, suspended in the air, caught by a warm draft escaping between the buildings.

Then her kite tugged her forward, urging her along the ride. Wind rushed by her as she held on to her bridle and the kite took her.

Hurry. Hurry. Keep up. We’re in this together.

A voice cut through the current, against the grain, fighting the ebb and flow. The disruption jarred Kaylin’s senses. She gasped as the owner of the voice repeated himself.

Not far behind her, Bruno nipped at Kaylin’s bridle, his black bat kite leading the charge with a furious predatory intensity. A hunter locked on to her scent.

Bruno had challenged her. Claimed his kite superior to her own. Polished and unbroken bamboo. Unmarred, flawless silk. Threads in the bridle taut and waxed. The best money could buy. And when your parents owned one of the largest food distributors in Kunglu, you could afford the best.

Her own faded blue falcon sorrowed despite its patches, tugged dangerously against its bound and scuffed bamboo limbs. Her brother had trusted the falcon kite. So would she. Wide wings spread, the falcon didn’t slice the current but cupped and held the winds, trusting and flowing.

Kaylin soared, surfing forward toward another block of tenements.

Three more blocks, she reassured herself. Three more and that little brat will eat his fancy black bat. Eat every scrap of silk without the condiments to chock the bites down!

The air currents reached toward the next cluster of buildings, swooped down, and shoved itself between two. Kaylin held on to the bridle, tucking herself, using her weight to pull her falcon down toward the buildings.

A man stuck his head out a window just as Kaylin kicked off the side of the tenement on the right. He shook his fist. Cursed her. She let out a roar of laughter as she sailed down and back up through a low arch of wind. Above her falcon crested the tops of the buildings, silky feathers brushing the concrete ridge lip effortlessly, gliding along a low cushion.

Then a shadow streamed by overhead pulling a cackle of maliciousness. Bruno sailed by above the rooftops, tethered to his massive bat kite with two bridles.

Butterball should be dropping like a stone, Kaylin mused with fury.

But his bat cruised on a higher updraft as he passed over Kaylin’s falcon.

His round head with a messy shock of dark hair twisted around and glared down at her.

He stuck out his tongue between tiny teeth and then…

He dropped low on his dual bridles and stomped on Kaylin’s falcon.

Suddenly the girl felt heavy as a sense of gravity tugged at her, leaving her current state of mind, her heart, and her surprised stomach several feet above her head.

She fell. No. Fell is generous.

All the while Bruno’s laughter echoed in the tight alley between the two tenements.

On the way down Kaylin felt her back scrape against a half dozen bricks, scoring her flesh through her jacket.

Her foot twisted as it hooked onto a gutter.

A window shelf clipped her elbow. She screamed. Not from the pain bursting from her body but from her utter helplessness of freefall. The loss of control. She was always in control when gliding with her brother’s falcon.

Keep yourself together. She gritted her teeth. This is your falcon now.

The ground was rising up to strike her.

Sucking in a breath Kaylin quickly reeled in her bridle. She snatched the falcon’s crumbled wings, tucked protectively, and unfurled them, tossing them wide with an outstretching of her limbs.

Six floors until the street, she could see the cardboard shanties of several beggars…

Wind roared passed her face, flushed her cheeks, tugged her short bob of hair, snapped her jacket and loose trousers like pinions. The falcon caught that wind, struggled against the franticness of such a low current, and filled itself with the potential of the modest updraft.

Kaylin swore her heels brushed the alley floor as her falcon kite tugged her up through the tenements at the last second.

Higher and higher. The falcon grasped for one stronger current after another, seeming to gather the strength of dozens of tiny winds and propel itself up by sheer force of will. Kaylin made her body as slim and straight as a blade, cutting through the currents, ripping along with the climbing falcon.

The rows of windows blurred. Sounds rushed past her ears.

The open air greeted falcon and girl with breathtaking silence. A relieved intake of breath. Kaylin heard her heart thunder, clap with joy. She laughed. She adjusted her bridle, tugging subtly to direct the falcon.

Falcon and girl shot forward, catching a strong updraft that took them seemingly as high as the tallest towers in the Uptown. Kaylin kept her body streamlined, allowing for no drag.

The black dot they spotted and followed grew closer as the falcon and girl glided onward, not dipping and riding the lower currents between. Up here the currents were stronger, breezier, and faster. Not as thrilling. But Kaylin and her blue falcon had a race to win.

They ate up the distance, slicing through the air like an arrow loosed from a bow.

Kaylin drew down on her bridle, catching more of the current, rising higher as she saw Bruno reach the edge of the final tenement in the last block before the finish line. She saw her friends waiting on two rooftops with a long wide ribbon stretched between the buildings. They cheered in a call of encouragement. Kaylin could hear them as clearly as a ringing bell.

As her falcon reached ten feet above Bruno’s bat, Kaylin gave slack to the bridle, spreading the falcon’s wings.

Falcon and girl dove fast on a steep trajectory. They brushed the top of the black bat, shoving themselves in front, interrupting Bruno’s course ever so slightly. Enough to jar and unsettle her opponent as Kaylin retook the lead.

Behind her she heard the rich brat fumble with curses as he attempted to right his course.

Kaylin stretched out her falcon’s wings and smoothed out her decent as she tucked her legs close to her chest and then pushed through the finish line amongst cheers.

Following behind only second, Bruno called out, “No. No. No! You should be grounded!”

Over her shoulder Kaylin tittered her fingers in a one-handed waive. “Maybe next time, Bruno! Hah!”

Three high school teens in the woods on a Friday night… some beers… skaters with a grudge… what could go wrong? Add in a couple of genetically created … END_OF_DOCUMENT_TOKEN_TO_BE_REPLACED

A dark short story about one man’s oversight concerning his death.  Since dying was just not part of his daily routine, the man just went on with his … END_OF_DOCUMENT_TOKEN_TO_BE_REPLACED