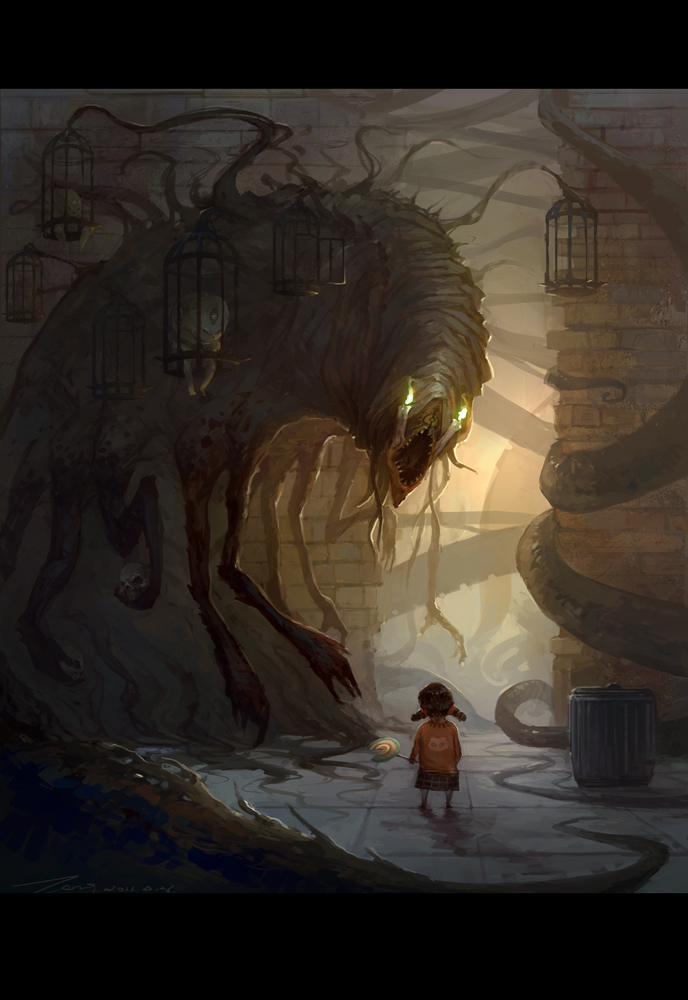 Disciple by ZERG118 on DeviantArt

“Only She Can See”

Shania’s mother didn’t notice when she slipped her hand away. Her mother continued to speak to someone she’d recognized. An old friend. Grownups tended to talk-talk-talk until children like Shania were background noise. They’d come out of Pada’s Boutique and literally run over the lady after turning right to head back to the car.

After what seemed like hours of listening to her mother and the lady speak, Shania’s boredom drove her attention to wander.

A door creaked. A trash can went bang, the top slammed down, a bag tossed inside. Again a door squealed in protest before whining closed.

Shania trotted away from her mother and entered the mouth of the alley between Pada and the boy’s unnamed restaurant.

She watched as the shadows clung to the restaurant’s rear door. Inky tendrils prying at the seams. Trying to slip between the cracks to follow.

As she ventured further into the alleyway, Shania’s foot hit something.

A can skittered across the ground and stopped by a rumpled piece of butcher paper with pieces of meat clinging to the inside.

The shadows jolted at the aluminum can’s commotion, twisting and folding back on itself, writhing like an eel in the ocean as it searched for… something. Dozens of dark arms reached out, leapt from wall to wall as the main body of the shadowy shape grew larger, consuming the alleyway, swallowing the light of day breaking through from each end of the alley.

Shania shivered at a sudden chill as the shadow reach her and rolled over her tiny body. From her toes inside her shoes, to the pigtails tying her dark hair. Her tiny hands rubbed her arms, cold inside her sweater, the dim shade enveloping the space around.

Yet she didn’t fear the shadow creature.

This was not the first time she’d seen such a wandering soul.

The way the shadows shifted, searching this way and that way, quick snaps of shade eager to suss out the source of the disturbance that drew its attention away from the boy from the restaurant, reminded Shania of a dog. The way a dog’s unbreakable focus wouldn’t let go a odd smell after that first whiff.

She thought of her own dog Cosmo. How a few weeks ago the pup stuck his nose into a hole in the grassy lawn and nearly had his face bit off by a gopher! Funny but scary. The gopher came away with a hunk of Cosmo’s beard and Cosmo walked away whining with a scratch on his snot and a weariness for strange holes.

The sound seemed to shatter the shadow creature’s delicate concentration.

The alley’s shadows went abruptly still–listening, watching, even somehow smelling the air. Then in a split second, the shade drew itself together in sudden realization, turned to and rushed toward Shaina in a wave of darkness.

Those same mindful tendrils wiggled around Shaina, enclosing her, as the shadow’s body drew closer, arched itself forward and showed the girl its face.

The face reminded Shaina of an insect’s. More tendrils dangled from its pointed chin. Tiny needles pricked forth from an endless, perfect darkness that sat back in the depths of the shadow’s mouth and throat. Antennae searched the air as if listening intently. Two lights hovered in the shadows where Shaina imaged eyes would go, the lights reminded her of flickering candle flames.

Tendril-like arms gripped either side of the alley and the shadow creature bared down on Shaina, examining her with curious interest. Not as if seeing a child for the first time but seeing a new type of child, different from the rest.

Shaina craned her neck all the way back until she felt she might topple backward, better to meet the shadow creature’s flickering gaze. Then her face splat in grin. She waved a hand up at the creature.

“Hiya!” she said, rocking back and forth on her heels. “My name’s Shaina.”

No answer came from the bug creature.

Not surprising. None of the shadow things Shaina had seen ever spoke much. Much like grownups. At least the shadow things paid attention to children! Most just leapt around, crawled, and explored the world. Intent to observe.

She put a finger to her lips, scrunched up her face in serious thought, and made a thoughtful noise. An idea came to her: “I’ll call you Legs!”

Recoiling, the creature’s naming seemed to shock it.

“Legs! Are you telling me no one’s ever given you a name?”

This time the creature tilted its head side to side, almost a negative response.

“Well, you got a name now!” Shaina responded with enthusiasm and a firm nod, happy to be the person to name the creature. “You tell all your friends, if they need a name they come see me.” She jabbed herself in the chest with a thumb and nodded. “Me! Shai–“

“Shaina! Shaina, where are you?”

That was the girl’s mom. She sounded terrified and angry.

Shaina let out a squeak and felt her body tingle with anxiousness. “Uh-oh. I’m in trouble. I’m not supposed to wander off.”

The shadow’s tendrils, dozens of arms (more like legs), pressed against the girl and urged her to get going.

Before leaving the alley, Shaina had to make sure. “You’re not gonna be lonely, are ya?”

With a very human-like shrug, the shadow creature continued to push the girl from its alley.

“Alright. If you insist.”

Shaina turned and skipped out of the alley, her feet dancing into the afternoon’s light after several child-like strides.

“Where have you been! You worried me terribly! You know not–“

Shaina swiftly turned around and regarded the shadow creature. Its insect form hovered over the alley, shrinking into itself like a slug might, to let light back into the alley.

She called back. “Nice to meet you, Legs!”

Three high school teens in the woods on a Friday night… some beers… skaters with a grudge… what could go wrong? Add in a couple of genetically created … END_OF_DOCUMENT_TOKEN_TO_BE_REPLACED

A dark short story about one man’s oversight concerning his death.  Since dying was just not part of his daily routine, the man just went on with his … END_OF_DOCUMENT_TOKEN_TO_BE_REPLACED