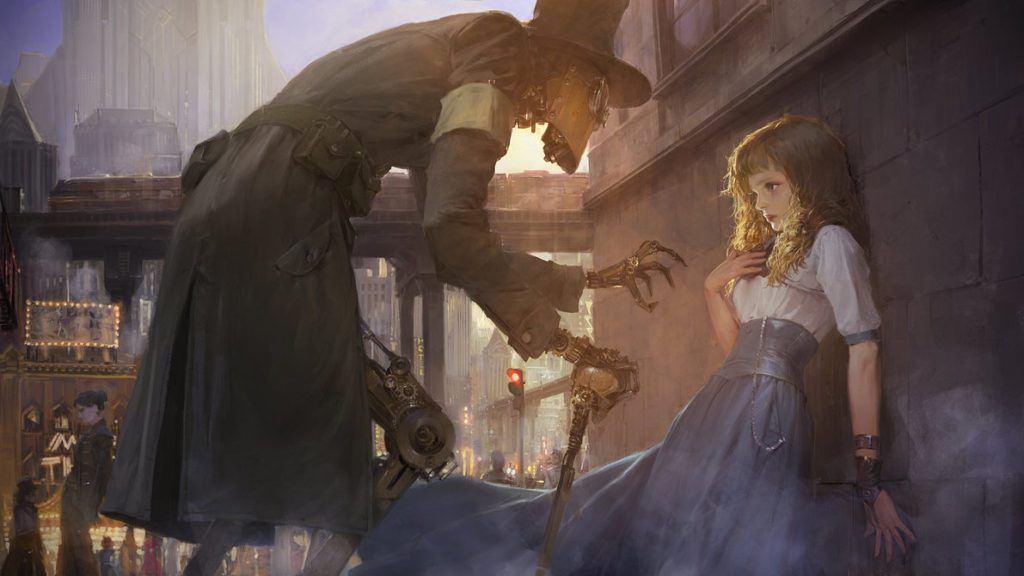 retired by totorrl on DeviantArt

Rayna walked the streets overwhelmed by the sights and smells of a world not her own. Unfamiliar and foreign, panic rose in her chest like an overinflated balloon ready to pop. Smothering her. Making it hard for her to breathe.

She stopped in the middle of the sidewalk, hunched over, grabbing her chest.

Closing her eyes, Rayna focused on her breathing. On each. Single. Breath.

While her anxiety remained, she didn’t feel like her skeleton might jump out of her skin at any minute and run off.

This other world felt entirely different, though shades of familiarity existed.

Buildings rose up to pierce the clouds. Cars drove through the streets. People filled and bustled along the sidewalks to either side of the road, intent on their individual tasks for the day.

But the world felt dirty. A slickness to the air, thick and pungent, made Rayna feel sick. Although a sun twin to her own hung in the sky, its light seemed dulled. Instead of a gleaming gold, a tarnished bronze.

Squinting through the hazy glare, she spied in the afternoon sky dark shape. Birds. But not. They reminded her of aircrafts but they had an avian’s glade and grace.

Then there was the clicking.

Clicking noises filled the world among the chatter of the city. Dozens of different pitches and tones, as if striking different types of metals. Spaced out at different intervals.

Rayna wondered if living in a clock sounded like this.

Again she had to settle the panic rising inside her, the click-clack of the world grew louder and pressing in on her. Threatening to tare her ears.

She pressed the sounds away and breathed deeply. The odd clockwork sounds were not gone but she mindfully pushed them to the periphery.

How does anyway sleep in this blasted world?

While she gathered her sanity the traffic on the sidewalk kindly flowed around her. She just an obstacle, like a trash can. Not a lost teenager from another world–a cleaner, pristine, quiet world filled with all the favorite things Rayna loved.

Suddenly the crowd cared little for the disoriented girl. People started pumping into her. At first brushing her arms. Then elbows connected with her shoulders. Cuffed her ears. Her hair caught on a man’s briefcase. She shrieked. He tugged. Strands of wheat-colored locks tore painfully from her head and the man simply huffed out a breath and moved on. The wheel of a stroller banged into Rayna’s shin. She sucked in a breath as the infant inside peeked over the bassinet and gurgled with mirth at her, pointing a gooey finger in her direction. The mother pressed on without notice.

Next person who so much as nudges me will see what a bird from my world looks like, she promised the passerby’s silently.

So as not to temp anyone to cross her, Rayna began to move away from the street side and to a nearby store’s display window.

She peered up and down the street. Where should she go? If she kept walking all she’d do is reach the edge of the city. Then where?

She blew out a frustrated breath from her lips and pressed her back against a wall next to the display window filled with baked goods–pastries, bread loafs, sweats, tarts. Rayna’s stomach rumbled and her mouth watered. She’d not eaten anything since falling through the hole and landing in this strange world.

Pushing her hunger to the edge of her awareness with the everywhere click-clacking, Rayna raised her arm up so she could consult the navlet on her wrist. The golden bracelet sparkled like nothing else in this world, a bright reminder of where she’d come from. The holodisk at the center didn’t brighten, though. The protruding gem-like disk remained dark, not responding to her will. She tapped the disk. Nothing. Dark. She shook her wrist. The chains connecting the bracelet to rings on her fingers clinked musically, tiny tinkles. But still… Nothing.

An overwhelming desire to plant her rear-end on the ground, hunch over, and cry rushed through Rayna. I’m truly alone. Disconnected to home.

Doing such a childish thing would not get her closer to home though.

Rayna inhaled a deep breath and in doing so pushed herself away from the bakery’s wall–walking would at least mean she moved towards… something.

Shoulders back, left foot swinging forward to merge her back into the flow of pedestrian traffic, Rayna released her brea–

Someone pressed a hand against Rayna’s chest, forcing her back against the bakery wall. Hard. That breath she was about to exhale rushed out of her as pain exploded against her back. In that same shocking moment, the click-clacking she’d kept abated at the edge of her awareness came forward against her will.

After shaking off her surprise, Rayna prepared to bring forth all her indignation, fright, and loneliness to drop down on this rude attacker.

To her further surprise, as she looked to her aggressor she found a metal face stared back her. An automaton. Dressed in a top hat and long coat it probably stole from a drunk vagrant, the metal individual bared down on Rayna with a crocked frame nearly falling over. Despite the decrepit state of the metal being, its claw pressed against her person demonstrated considerable strength.

Rayna’s hands shot up and wrapped around the arm pinning her painfully against the wall.

Telescoping eyes whirled out from the metallic face plate, closely examining the girl from another world.

Rayna looked around desperately for aid. Few people saw the altercation and those who did seemed to brush away the danger screaming inside her. That’s when she noticed other automatons walking the street. Many in finer clothing than her attacker. All with straighter frames. Their metal bodies polished to a high shine. Their parts covered by plates. She could see the gears and pistons working behind her attacker’s skeleton, like exposed organs in an emaciated human.

“Help! Somebody get this… thing off me!”

No one lept to her aid.

She smashed a fist down against her metal attacker’s arm. The blow hurt her more than it. The automaton didn’t seem to notice. It just kept looking at her. Examining her. Eyes moving in and then out again, spinning as if focusing a lens.

Rayna gritted her teeth. Struggled despite not being able to move.

Suddenly the automaton’s other claw rose and one metal digit tapped at the navlet on Rayna’s arm.

It spoke then. A voice coming from a speaker sounding far away and with stripped wires. “You’re not from here. What is this?”

“It’s mine. Leave me alone you metal clod!”

Rayna kicked a booted foot at one of the automaton’s bowed leg.

The pressure against her chest fell away and the automaton crumbled to a demure crouch, screeching, grinding in what could only be a simulation of pain.

Rayna kicked again. This time her foot connected with the automaton’s scratched and pitted faceplate. Its  head nearly bent all the way back to hit its carved spine.

A stray wind snatched its the top hat.

Rayna darted alongside that same wind, tearing down the street and away from the click-clacking of her attacker. Behind her she heard the gears turning, the servos turning, struggling to lift up the metal being.

She ran faster despite her restricting blue skirts and high heeled boots, pushing herself away through the traffic.

Three high school teens in the woods on a Friday night… some beers… skaters with a grudge… what could go wrong? Add in a couple of genetically created … END_OF_DOCUMENT_TOKEN_TO_BE_REPLACED

A dark short story about one man’s oversight concerning his death.  Since dying was just not part of his daily routine, the man just went on with his … END_OF_DOCUMENT_TOKEN_TO_BE_REPLACED