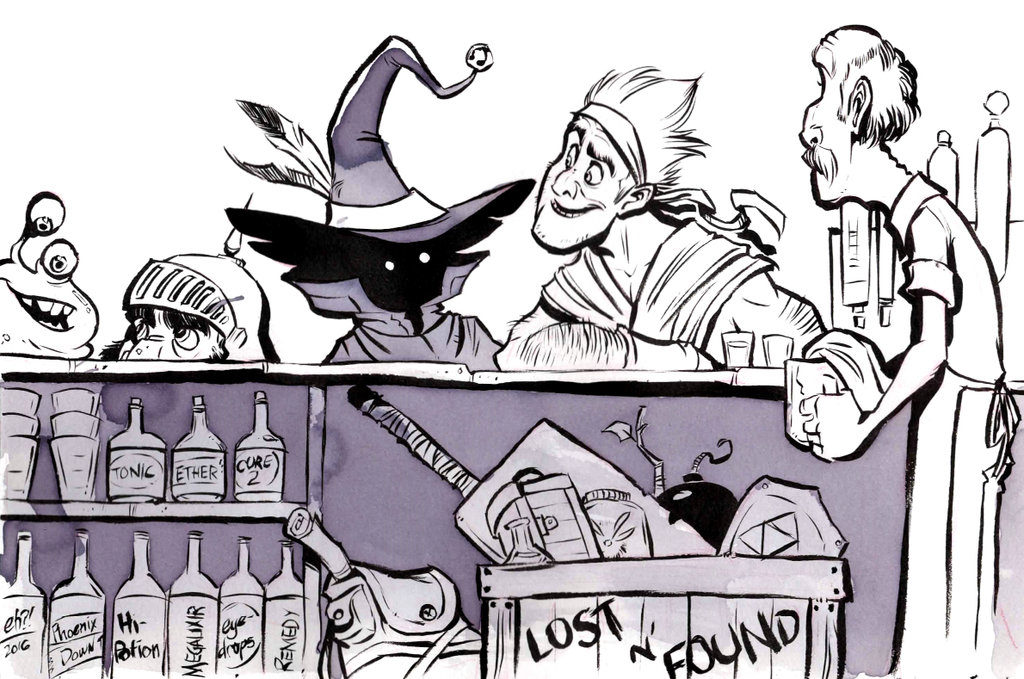 Laurence spilled into the Leaky Faucet, returning to the scene of the crime with the most damning redness on his hands… a pounding hangover.

Light didn’t reach inside the Faucet. The watering hole banished sunlight, preferring low candlelight. The more depressing the better. The less someone knew how the sun and moons turned the more they drank.

All the way to the Faucet from the alley and gutter Laurence woke up in, the morning sunlight–or was the time afternoon? He didn’t rightly know!–dogged him. Jabbing at his already splitting headache.

Entering the Faucet, Laurence breathed a sigh of relief and quickly closed the door. A drunken chorus thanked him with similar sighs.

Only the rats remained in the tavern this early in the morning. Those the fat tabby Maurice refused to hunt out of laziness or hatred for the owner. And those rats who never seemed to leave the Faucet and whose names were etched into stoles and chairs.

Laurence stumbled up to the bar and threw himself forward across the polished mahogany.

The owner for the Faucet, Jaykay snapped Laurence’s left ear with a whip from a damp rag.

Jaykay harrumphed and slapped Laurence across the back of the head with the flat of his hand.

Laurence snapped up. His head thundered with pain. This time the ouch he hissed was real.

Laurence rubbed at his head.

“What was that for Jaykay?”

Jaykay wiped up some liquid on the bartop where Laurence had purposefully face-planted. More than likely drawl.

“You come in my tavern you act respectable,” Jaykay said with disgruntlement. “No layin’ about the bar. This ain’t your house.”

Holding up his hands Laurence took a step back. “Easy there. I’m just lookin for somethin is all.”

An eyebrow cocked suspiciously, Jaykay slung his rag over a shoulder and crossed his arms. “Whatcha lookin for?”

With his arms spread Laurence took a deep, easy breath. “That’s the kinda of customer service I expect from a just-less-than-respectable establishment such as the Faucet.”

Laurence unbuckled his sword belt and laid it and the attached scabbard on the bar. He gestured with open hands. Ta-da!

After taking a quick look at the sword belt and scabbard Jaykay scuffed with quick annoyance. “See you found somethin, you have.”

He tapped the scabbard. The empty scabbard.

“I’m lookin for my sword. I was in here last night. Don’t you recognize me?!”

Laurence smiled big and white, beaming handsomely if he said so himself. And he did. Often

With a quicker look than he gave the sword belt and scabbard, Jaykay said, “Can’t say that I know ya, mate.”

All confidence and swagger drained from Laurence like a good long pull from mug of ail. I’m here every of night when I’m in town! How doesn’t Jaykay not know me?! I know him!

A wave of his hand and Laurence dismissed his foul mood. “Do you have a sword lying about anywhere?”

Jaykay exhaled heavily, dipped down behind the bar, and came back out with a heavy chest. For a beanpole of a man with wispy white hairs under his nose and nowhere else the man could haul a loud!

“If anyone turned in a sword or anything else you’ll find it here,” the Faucet’s barman and owner said with little care. He snorted then. “That’s if anyone found it was honest enough. People who frequent here ain’t known for their charity.”

Offhandedly Laurence replied, “I know many of em. Not bad sorts.”

To his eyes the chest with Lost n’ Found burned on the front seemed not big enough to hold a sword. Laurence put his hands on either side of the chest and then on the bar and the top of the chest’s arched lid.

Jaykay stopped Laurence there. “Its a chest of holding. Just reach in and pull out what’s in side. If the sword’s there you’ll pull it out.”

Inhaling deeply, Laurence shoved his hand inside the chest. His hand went in. His lower arm disappeared. He put a knee up on the bar, lifted his body up, and plunged his arm deep into the chest, up to his elbow.

Jaykay met Laurence’s eyes as he looked up. The eyes of thin man in the white apron sparkled with silent humor. At Laurence’s expense. “Told ya.”

Hand reaching. Fingers probing. Laurence’s hand wrapped around something and he pulled.

A leather satchel with a broken strap came out. Inside the satchel Laurence found small bombs. Smooth round casing. Waxed rope fuses sprouting from the top of each. The satchel reeked of the sharp, pungent tang of black powder.

Laurence reached back inside the chest. He came out this second time with a rusty helm, the face guard gone, the padding inside smelling of sweat.

Helm tossed aside, Laurence next pulled out a pistol missing a grip.

He grunted in frustration and nearly smashed the pistol’s barrel against the edge of the bar if not for Jaykay’s dubious look warning him. Laurence flashed the bartender a toothy grin and tossed the broken pistol over his shoulder.

Somewhere in the bar Maurice meowed in surprise then hissed.

An empty elixir vile with no stopper.

Half of a map that crumbled in Laurence’s hands, paper bits falling through his fingers like grains of sand.

Dagger with the tip broken off.

A woman’s garter once pink now a sickening brownish with the frilly parts torn or smashed.

A boot. No laces.

Another boot, unmatching, with the toe gone. Something with sharp teeth had eaten the boot toe and maybe the owner’s toes too.

A thick tree branch as long as Laurence’s lower arm. He tossed away this piece of–

An explosion spread out behind Laurence. He turned just in time to see two tables fly through the air in opposite directions. To see chairs scatter and brake in pieces against the floor, for a deer’s mounted head to fall from above the cold fireplace, for a shattered leg piece to puncture the wall.  Some of the bar rats lept from their seats, roused from their drunken stupor, and fled the tavern for safety.

In the middle of this wreckage lay the twig.

“Huh.” Laurence scratched his stubbly chin and rethought his assessment of the piece of wood. “Not a branch. A wand.”

“That’s it. No more chest. You’re banned, the Faucet is turned off for you.” Jaykay grabbed the Lost ‘n Found chest and pulled it away from in front of Laurence to place it behind the bar.

Laurence struggled with the bartender for the chest. The wiry bald man exerted so much unbelievable strength that Laurence let go of the chest and stuck his hand inside the chest for one final pull. Where is my Gods damned sword?! Fuck!

Jaykay succeeded and slammed the chest back down behind the bar, pulling Laurence’s arm out of the top. Laurence’s elbow scrapped the lid and the lid nearly slammed home on his fingers.

For his effort Laurence held an amulet.

Dejected, Laurence moaned and laid his head on his crossed arms on top of the bar. “All I want is my sword, mate! Just my sword.”

“You’ll not find your stupid sword here. Get. Out!” Jaykay threw out a tree branch thin arm and extended a finger across the ruined bar toward the tavern’s front door.

Laurence clenched the amulet in his fist and pleaded with the immovable bartender. “How am I supposed to–“

“I can’t guard a caravan without a sword,” Laurence protested. “And I spent all my money drinking to the bottom of one of your Gods damn mugs, Jaykay.”

Laurence knew the sword lay somewhere in the bar. In the chest or in a corner somewhere. He just needed a few more–

Suddenly Laurence noticed the amulet hovering in midair and pulsing red. Hovering in the direction of the tavern’s door. Urgently the amulet shivered, wanting to go, wanting Laurence to move forward.

The amulet shook more fervently. Yes you idiot. Follow me!

Laurence kicked back his bar stool and stomped toward the tavern door.

“Wait I minute!” Jaykay declared loudly. “You said you were looking for a sword… not an amulet. That’s not yours!”

Face split in a toothy grin, Laurence winked at the barman over a shoulder. “Lost and now found.”

Three high school teens in the woods on a Friday night… some beers… skaters with a grudge… what could go wrong? Add in a couple of genetically created … END_OF_DOCUMENT_TOKEN_TO_BE_REPLACED

A dark short story about one man’s oversight concerning his death.  Since dying was just not part of his daily routine, the man just went on with his … END_OF_DOCUMENT_TOKEN_TO_BE_REPLACED