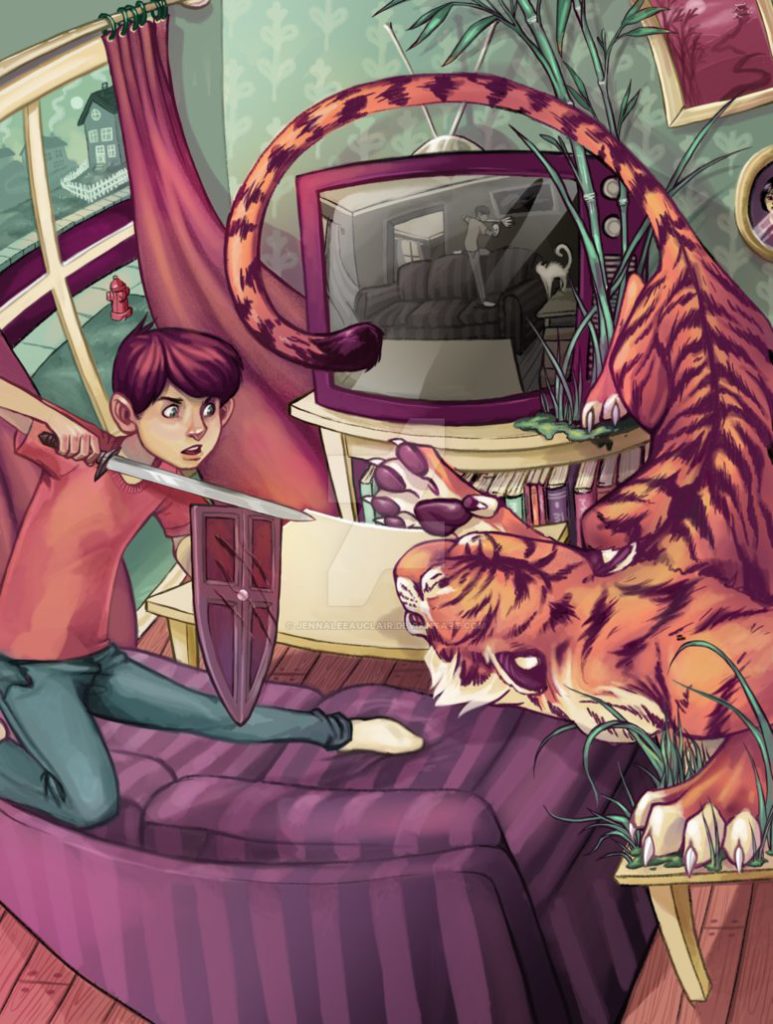 A Fierce Imagination by Jennalee Auclair

“Out of the Page”

The television blinked to black with an electric sizzle and the static of power lost.

Percy’s eyes blinked as he worked moisture in his mouth and after a short beat realized someone had turned off the television.

He looked around as if searching for a wily trickster. “Hey!” he said with lip-pouting indignation.

Suddenly a weight dropped in his lap.

Percy picked up the book. His thump grazed the packed pages between the covers. Too many pages.

“You’ve watched enough for tonight, bud,” his mother told him. She waved the remote tantalizingly at him to say: yes, I turned off the distraction box.

“C’mon, mom! You’re going out. What’s the matter? You can pretend I’m reading and not know the difference.” He waved the book around in the air between them.

His mother went about the living room gathering her purse, slipping on her jacket, and putting on a pair of heels. All while holding the television remote hostage.

Just when Percy’s hopes rose its highest and he thought she might relent, his mother tucked the remote in her purse.

“Read. The. Book.” She told him on her way to the front door of their home. “It was one of my favorites when I was a girl. You’ll like it. Trust me.”

“As a matter of fact: no, it’s not a romance,” his mother assured him. “The story’s an adventure. Takes place in a jungle. It’s about a boy looking for his home and the dangerous animals hunting him.”

Percy sighed and tossed the book onto the table beside the couch.

“You know I can just get up and turn on the TV without the remote,” Percy told his mother.

About to close the front door, his mother stuck her head back inside the house and grinned knowingly. “We both know you’re not going to get up, go to the TV and press the power button, and then get up every time you want to change the channel too. Too much work for ya, bud.”

As the door shut and locked, Percy fell back into the couch, grabbed the pillow from underneath him, and placed it over his face. He screamed about the unfairness. His mother was right! How annoying to have to get up and change the channel each time he wanted to see what was playing on another network. That was why someone invented the remote! Less work more zombie-entertainment time.

What was more work than getting up to turn on the television and change the channels? Reading! Reading made Percy’s eyes tired. Nothing exciting ever happened when reading. What was the point?

The house’s silence mocked Percy. Made him nervous. A big empty space of quiet needed something to fill it up. The noise from a good car chase would do nicely. Or hungry moans of the undead searching for flesh. The laugh track from a sitcom about a wacky, diverse family with three dads. Even the rapid fire badgering of television ads would be preferable to silence.

A growling broke through the fifteen year old’s melancholy complaints.

Just my imagination, he told himself.

Percy took the pillow from his face, groaned, and sat up. His heart nearly leaped up his throat and out his mouth from what he saw…

Climbing precariously over and across the table next to the couch was a tiger! It stretched its maw wide and roared at the boy pretending to be a coach-potato. The sound tore at the silence. Sent the hairs on the back of Percy’s neck standing on end.

Quick as the lightning shaped stripes along its back the tiger swiped a paw at Percy. Its claws caught the light of the ceiling fan overhead.

Percy let out a tiny yelp and threw up his arms along with the couch pillow across his face to intercept the jungle predator’s strike.

Instead of gouging cloth and feathers, the tiger’s claw’s scraped steel banded wood.

Percy drew up his knees. Tucked his legs against his chest. Pushed the shield forward against the scrabbling tiger as it raked the shield. He was able to get his feet under the shield this way and with the force from his legs, push the tiger off him.

The tiger fell back on its hind legs, staggering onto the side table. The tiny table meant for a couple drinks couldn’t hold the animal’s weight though and so started to wobble and tip. The tiger tried and failed to find purchase. It went crashing to the floor with a pathetic meow. The table turned over and exploded in a shower of wood splinters on top of the animal.

With the momentary respite, Percy tug through the couch cushions to find a weapon. Anything to take the fight to the tiger. The shield wouldn’t last forever against the beast’s razor-sharp claws.

Shaking of its fall, more angry and determined than ever to tear into some tasty fifteen-year-aged piece of meat, the tiger bound on to the back of the couch and swung for Percy with both sets of claws. It would hug the boy then rip his black in to a bloody mess.

One hand still in the endless void between the cushions, Percy brought up his shield once again. “Hold together,” he told the shield.

The tiger batted aside the shield, the wood groaning, the planks nearly falling about around Percy’s arm. It then took the shield in its mouth and tore the shield from the boy’s arm, flinging the useless defense across the room. The shield’s bottom point punctured the television. The screen spit sparks.

The tiger roared with partial victory. Then the predator drew itself up, dug one set of claws into the couch’s back–ripping and tearing the microfiber and stuffing–and drew back the other set of claws to slice through Percy.

Percy’s fingers curled around something between the cushions.

Good enough. It has to be good enough or I’m kitty food!

Percy drew from the couch a short sword to meet the tiger’s claws. Sparks from the destroyed television bounded about the length of the blade as Percy gazed at the silvery surface.

Consumed by rage, the tiger called out and threw itself at Percy.

The boy turned aside the tiger’s first and second attacks. He cut into its orange fur hide with each counter stroke. Every cut only infuriated the beast as its orange coat became matted with blood. Its roar grew larger and more determined.

Instead of attacking with claws the tiger leaped down to the floor and caught hold of end tables with its front legs to toss them at Percy. The sword sliced through the first easily but pressed the boy back. Percy ducked the second and charged with his sword’s point leading. With a tail flick the tiger slipped behind the coffee table, turned it up, and swept it at the boy. Percy threw himself at the ground and slid underneath the table as it turned end over end, smashed into the ceiling, clipped the ceiling fan blades, and spun off somewhere in the direction of the foyer.

When he came back up, ready to cut upward at the beast, Percy found himself face to face with Snowball.

Snowball hissed at Percy, his back arched and his tail coiled up into the shape of a question mark.

The family cat swiped a paw at the ballpoint pen Percy held, disarming the boy with little effort.

Looking into those green slitted eyes, a moment of clarity came over Percy. He shook his head clear of the cobwebs and realized his chest heaved. His back was damp with sweat too. Around him the living room remained in a familiar state. Orderly. Tidy. The ceiling fan spun lazily. The coffee table Snowball stood on. Above the mantle and attached to the wall the television stared at Percy dark and blank, whole.

Percy fell back into the couch and caught his breath after several moments.

Whatever calm the boy achieved the family cat seemed to sense. Snowball relaxed, uncoiled his snowy form, bounded off the coffee table, and padded out of the room, gracing Percy with one last glance. Annoyed. Imperious.

Percy watched the cat sauntered away. As he did his gaze fell to the side table. There his mother’s book lay still.

Percy reached over and picked up the book.

Leather binding. Pages yellow with age. The gold lettering across the front read The Jungle Book.

Percy let out a defeated breath, opened the book’s cover, flipped to the first page, and read:

“It was seven o’clock of a very warm evening in the Seeonee hills when Father Wolf woke up from his day’s rest, scratched himself, yawned, and spread out his paws one after the other to get rid of the sleepy feeling in their tips. “

Three high school teens in the woods on a Friday night… some beers… skaters with a grudge… what could go wrong? Add in a couple of genetically created … END_OF_DOCUMENT_TOKEN_TO_BE_REPLACED

A dark short story about one man’s oversight concerning his death.  Since dying was just not part of his daily routine, the man just went on with his … END_OF_DOCUMENT_TOKEN_TO_BE_REPLACED