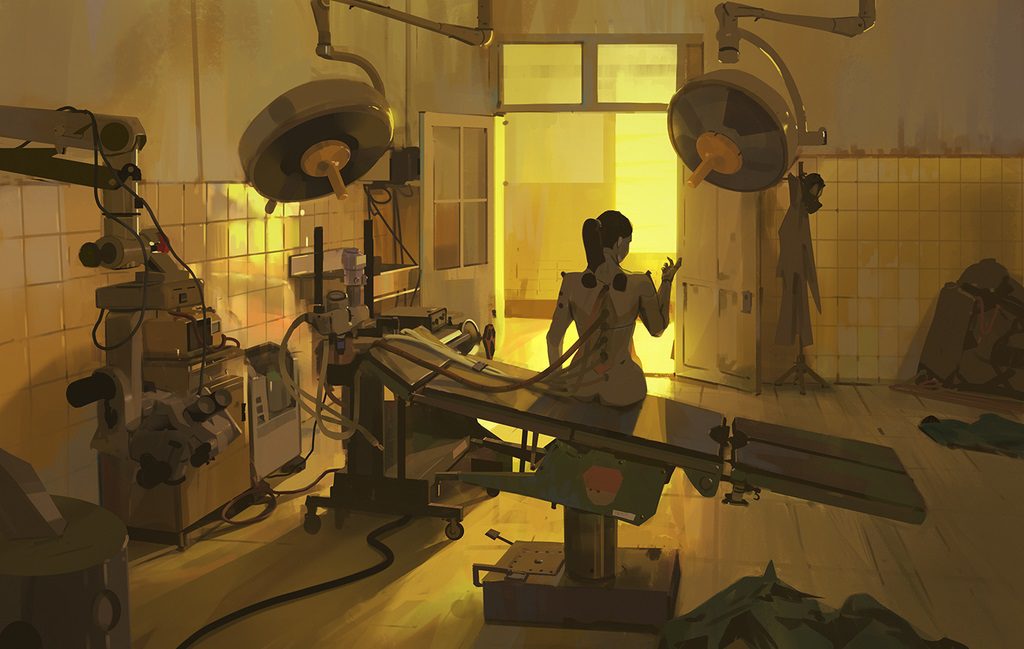 Lola woke up with a start the same way someone wakes from a light sleep when an alarm rings. Sudden. Immediate.

Lola continued to lay there. Despite her desires.

Panic set in. Lola could feel her chest rising as her heart sped up. Had she been in an accident and lost her basic mobil–

Lola moved a hand in front of her face. Willed her arm to swing up and present her palm faced down. A movement she found to be a great effort. Her limb didn’t feel like her own…

The hand dangling limply from a wrist hanging over her face looked like a machine, a peripheral like a keyboard or mouse, not a human appendage. Metal. Servos. Wires and tubes. When the fingers flexed Lola heard clicking and soft puffs of air like from a compressor.

This isn’t right, she told herself. This isn’t my hand! Where’s my hand!?

Lola felt her body convulse with heightened panic. Confusion. Disconnection. She lept away from the mechanical hand in front of her face.

She tried to shove herself off the table she’d been laying upon when waking. The table rocked on its legs. The room tiled spasmodically against Lola’s protests. Her body obeyed her demands. But the table would not let her go. She looked down. No straps kept her body secure.  Dangling from the table sides were leather straps with undone crass buckles. She was also naked from the waist up.

Her hand forgotten, Lola twisted around to see what strained her. If not leather straps then…

A shutter ran through Lola as she saw what kept her from rising from the table.

Down the length of the table ran a slot about five inches wide. Cables wrapped in black rubber sprouted from the slot. The cables ran from outlets in the floor and into her back. Into Lola’s spine. The metal hand she couldn’t believe was hers reached around and probed her backside. More metal. Her flesh gave away to metal that ran along where Lola knew she should find her spine. The cables–five in all–plugged into the metal spine. Her mechanical fingers ran the length of the spine, ticked over artificial vertebra. Clack-clack-clack-clack…

Lola struggled to suck in a breath. She felt tears slide down her cheeks.

“What’s happened to me?” she asked the room. No one answered.

A quick glance around the room gave Lola the impression of a hospital. Not a patient’s room. An operating room. Except not a regular operating room. There were monitors to keep track of her vital signs. Machines to aid her in breathing. To provide her nourishment with fluids. Not far away on a table sat a tray filled with instruments such as knives and saws. Asides feom these normal hospital items were oddities. Tables filled with wrenches, sockets, screwdrivers. Sheets of metal leaned against a wall. Hanging from the ceiling among the many–now dark–lamps were unused metal spinal cords with blinking lights and whirling pieces. Was this what someone surgically put inside her?  Among the spines were full torsos that resembled human anatomy but with parts taken from an assembly line. On another wall Lola saw wracks of artificial arms and legs.

An operating room? Sure. But also a machine shop where you bring a car. The idea of a mechanic with a communuty collage education doing surgery on Lola instead of a doctor with four degrees left her frightened. Filled her with horror.

Lola raised on arm and was about to cover her mouth, to suppress a scream, when she noticed her metal hand again and dropped the appendage with a hard clang to the operating table. Her other arm she brought around. That arm remained flesh and bone as far as she could tell. The fingers pressed against her damp cheek. They felt warm and squishy. Lola sighed with relief before running her real fingers through her crop of short red hair.

The room was gloomy, lit with clean and sterile light emanating from a hallway outside the room’s lone door.

Lola swung her legs off the table. These too–both limbs–were metal. One from the calf down and the other from mid-thigh. For a moment Lola felt as if her chest might collapse inward as she struggled with the reality of her situation.

“What’s happened to me?” she asked, her voice small and unimportant sounding. But she was still alone. She watched the open door glowing with white light. No one passed by. Yet she heard noises. People talking. Walking about. Distantly.

Lola reached behind and twisted the cables plugged into her spine. Each one came away with some effort. The monitors in the room wailed with alarm.

Strength pulsed in her metal legs as she stood up without trouble. Still, she had a hard time connecting with the metal. It was as if her torso floated above her new legs. Conscious effort, precise thought was needed for each step she took. Moving her legs was no longer a matter knowing the destination. She now needed to think about the action to get there.

On a table next to the door someone had left a hospital gown. Lola grabbed the white gown with blue dots and shrugged into it to cover her breasts.

The human chatter grew louder as Lola stepped outside the room. She found the light so bright so she tossed her metal arm over her eyes to shield her vision. Vision adjusting, she took her next few steps forward.

Three high school teens in the woods on a Friday night… some beers… skaters with a grudge… what could go wrong? Add in a couple of genetically created … END_OF_DOCUMENT_TOKEN_TO_BE_REPLACED

A dark short story about one man’s oversight concerning his death.  Since dying was just not part of his daily routine, the man just went on with his … END_OF_DOCUMENT_TOKEN_TO_BE_REPLACED