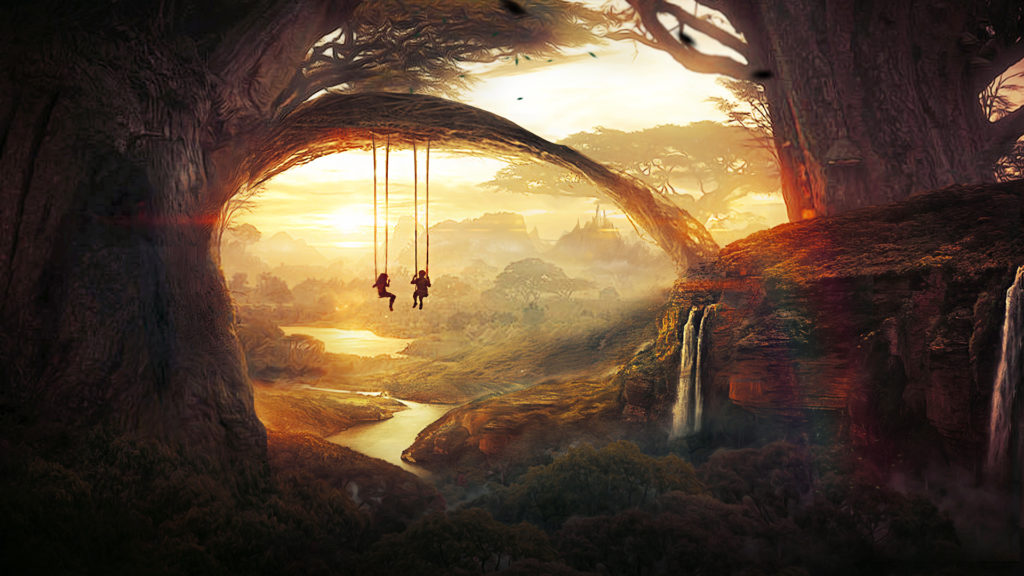 Tree swing by t1na on DeviantArt

Gustin and Eva ran along the dirt path. Their feet finding familiar footing. Sure. True. Like a deer’s hooves along a hunting track.

To the west the sky dimmed. From the clear of day’s blue. To the bleeding of the day. Reds. Oranges. Purples around the edges where day met dusk.

If we don’t hurry we’ll miss the view, Gustin worried.

He reached a hand out, reached behind, and grabbed for Eva.

Their fingers grazed. Gently skimming. Eva laughed. Like the fluttering of wings on the wind.

Gustin caught the laughter. Infectious. He found himself overflowing with Eva’s enthusiasm, her excitement.

Again he reached out and snatched Eva’s hand.

The tree waited not far away. Around a bend. After a short straight. Up and over a boulder the size of a giant’s fist. Down a short mossy hill with a old, broken tree sticking out like a gnarled witch’s clawed hand. Then they’d hear the rush of water.

“You always say we’re gonna be late,” Eva teased. Not worried.  Excited by the chase as much as the finish line. “And we always get there with plenty of time.”

“There’ll be that one time…”

Gustin glanced back and grinned at his friend. He squeezed Eva’s hand. “We run!”

He pulled and she followed with no complaint.

Together the two teens ran through the greenery. Around them the trees towered. Sweeping overhead in arches. Streams of red and orange light shooting through like ribbons. Warm bursts countering the chill of the shade.

They stretched out the arms not linking them together and felt for the leaves on the bushes that they rushed past, unsettling the quiet stillness with their passing.

Just when Gustin thought himself out of breath, he heard the waterfall. It drowned out the chirping of the birds. Pushed back the sounds of the forest. The gliding of the wind. The shimmy of the tree limbs. The rustle of the leaves. A powerful wave of sound that dominated the area with its majesty.

Gustin skidded to a halt when all he could hear was the rush of the waterfall. Ankle deep, his feet disappeared among the red blooms of the scarleta poineta, a pinwheel floor that grew from the soft grass at the falls’ edge before the short drop, attracted to water, to heights.

And there, to the northwest, a great branch as thick as a fat man’s belly swooped across the open air and touched down to the right of the falls where Gustin and Eva stood. Its wood fingers gently probing the grassy ground beyond the scarleta poineta.

Eva shook her head. Let go a shaky breath. “I hate this part.”

Gustin didn’t hesitate. He let go of Eva’s hand. Retreated several paces. Leaned forward. Then he took off running. After several quick steps he leaped out along with the rushing waterfall and grabbed for the branch’s spiting fingers. An easy jump. Still, Gustin’s heart raced.

His fingers found the rough bark. Dug in. Held fast, dangling him over the falls.

He pulled himself up. Climbed up until the branch grew thicker and didn’t shake under his weight.

Turning himself around carefully, Gustin reached out and took Eva by the wrist, helping her climb further up the branch.

With Eva settled safely on the branch, Gustin led them up the curve of the tree limb. They stopped at the apex, just before the bend sloped back down toward the tree’s trunk.

Set into the branch beneath them were hand- and footholds. Nature made. Grown out of the bark.

Gustin quickly climbed down. Hand below hand. Lowering one foot then the other. Until his feet found only air and his hands found two wrist-thick branches that swayed with the stray wind.  Like vines but more sturdy. Each vine Gustin grabbed hold with a hand. He worked his way down. When his feet found a flat step, Gustin stopped, pulled his legs up, and lowered himself another couple feet until his rear-end sat on the step.

Not long after he’d settled himself, Eva joined Gustin on the second and the branch’s only other swing. Her face was flushed. Her eyes wide with relief and panic.

“Ever time… it scares me to make that climb,” Eva confessed.

Gustin swept out a hand in front of him. “Yeah. But isn’t this worth a chance at death?”

They together looked out over the day’s dusk.

The sky shined with  a golden radiance, plating the world in precious metal.

Swinging next to Gustin, Eva marveled at the view. “Never gets old,” she murmured.

The river the waterfall emptied into snaked its way out of the forest. Around several small mountains. Through the remaining forest, a dense frontier.

And there in the distance, as small as a thumb held out at arms length, sat the kingdom’s capital. A castle on a rocky hill. No bigger than a child’s playset.

“So worth it…” Gustin agreed. But he knew the run and trip paid for all from the first step. He just liked hearing Eva admit as much.

The tree limb creaked with the gentle snoring of a sleeping giant as the two friends watched the day turn to night. Their kingdom shining with gold and growing to a cold dark with night.

Three high school teens in the woods on a Friday night… some beers… skaters with a grudge… what could go wrong? Add in a couple of genetically created … END_OF_DOCUMENT_TOKEN_TO_BE_REPLACED

A dark short story about one man’s oversight concerning his death.  Since dying was just not part of his daily routine, the man just went on with his … END_OF_DOCUMENT_TOKEN_TO_BE_REPLACED