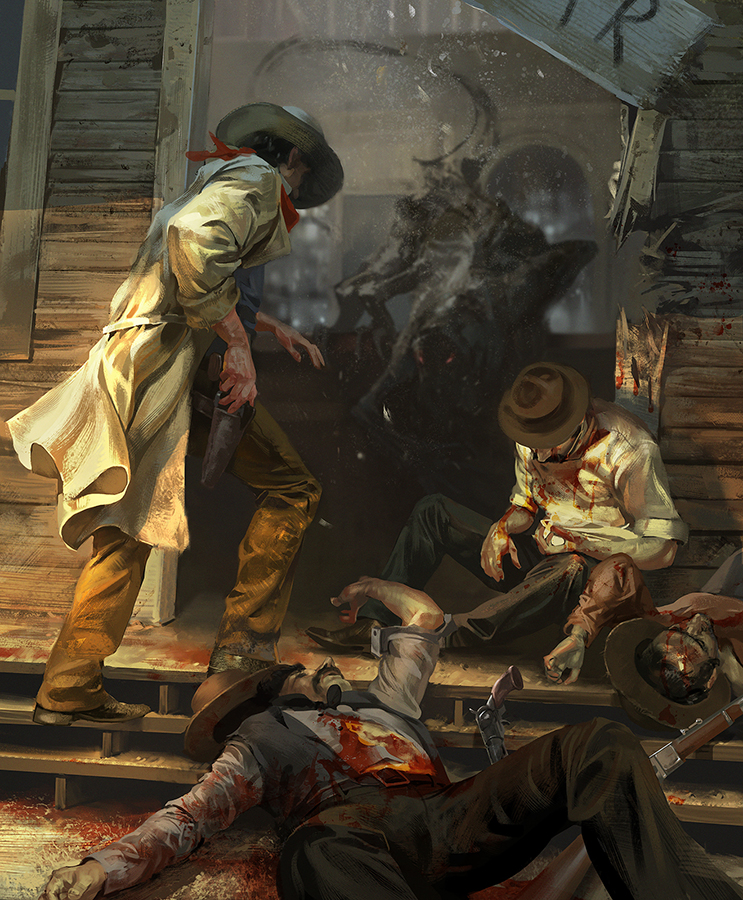 The hell saloon by Andrei-Pervukhin from DeviantArt

The main street through Tombrock had settled before Russell arrived.

Panic had exploded, attracting Russell’s attention at the station down the avenue, and then the commotion promptly scattered to the nearby buildings. Folk had taken cover. Found safety behind locked doors and shuttered windows and drawn curtains.

Now all Russell could hear was the spinning clink of his spurs and whispers.

Russell could feel the townsfolk eyes staring at his back as he approached the Sundown Saloon. They were there. Waiting. Watching. Whispering.

Russell tipped his hat up. Let a passing breeze slip across his brow, stir the sweat that the hot afternoon had brought on. Overhead the sun glared down. As intent as the townsfolk.

Sitting like puppets with strings cut, men and woman sprawled about on the few steps leading up to the saloon’s entrance. Gore seeping from wounds. Clothes dipped in red. The front doors blown away. The wooden frame splintered, chunks of wood gone and laying about the dead.

Through the busted entrance Russell could see clearly into the saloon.

And inside the saloon, lounging at the bar, perched atop a stool as if some resting bird, Russell saw the biggest plains native he’d ever encountered. He knew the man: Blackrider Tom.

Blackrider’s pale dark eyes caught sight of Russell, eyes lingering on the lawman’s metal badge pinned to the front of his jacket, the two pistols slung low on his lips, and his lips curling up in a snarl.

Blackrider’s shadow also stirred. Interested in the lawman striding up to the saloon. The living dark curled around Blackrider’s shoulders like smoke. Two red pinpricks tracked Russell as he climbed the three steps up to the porch outside the busted saloon doors.

A bottle sat out on the bar and within Blackrider’s reach.

The shadow sauntered to the bottle, sniffed the wet lip of the bottle, and moved on across the bar.

Blackrider took up the bottle. A four-finger shot glass stood empty not far inside Blackrider’s reach. He ignored the glass. Instead, he tipped the bottle back along with his head and let a long swallow slip down his throat. The shadow seemed to stumble at the corner of Russell’s vision.

“Quite the mess you made here, Tom,” said Russell. He stopped outside the saloon’s entrance.

Blackrider nodded to the lawman. “Disagreement is all. I didn’t like the hospitality.”

“I just did.” Blackrider snickered.

As Blackrider took another swig from the bottle, Russell carefully, slowly drew back his duster to reach for his pistols. His hands hovered casually near both the left and right weapon. His eyes darted between the shadow creature prowling the bartop and Blackrider.

Blackrider put down the bottle. He didn’t look up. Not right away. He ran the back of his hand across his mouth and smacked his lips.

Blackrider picked up the bottle again. A dusty green glass. He ran a thumb across the front, pushing away years of dust.

With a satisfied sigh, Blackrider commented on the bottle: “Sure is. Dumb bastard wouldn’t part with two fingers.”

“I’ve seen Shemp pull it out for no one,” Russell mused. His eyes roamed the inside of the saloon. Tables overturned. Chairs broken, legs scattered. More gore. Bodies laid in shadows as dust danced playfully in the slivers of light pushing through the window shutters.

All this over two fingers of whiskey? Russell thought he might vomit. He could feel his stomach heave.

The shadow creature settled protectively around Blackrider like a cat, red eyes ever on Russell.

“Which gun you gonna draw, Russ?” Blackrider asked. “Left? Or you gonna reach for the right?”

Blackrider replaced the bottle on the bartop and finally met Russell’s gaze. His eyes were dark as pitch. Dark as shadow. Normally his kind had red eyes, same as the shadow creature bore now.

Russell bobbed his head side to side in thought, casual like, eyes turned up searching.

Without looking back at Blackrider, Russell drew his left pistol and fired a round from the hip. The round he aimed for Blackrider’s heart.

The shadow instantly crashed in around its master like a powerful wave, fully engulfing Blackrider with thick dark smoke. A feline face emerged from the living dark and growled angrily at Russell just as red eyes blinked to life in a deep set brow.

Blackrider chuckled. “If you’re gonna go for the iron, better make sure you’re faster than my walker, sheriff.”

Lips around a curse, Russell dove to the left of the saloon’s entrance just as Blackrider’s shadow creature flowed from a cloud of dark and into the man-sized form of a mountain cat. Its front paws reached for either side of the entrance. Unsheathed inky claws sunk into what remained of the wooden frame and pushed out. Russell heard the building grown and crack.

Russell’s hand dipped for the right hip and drew that pistol. A larger weapon, this pistol’s cylinder was as large as a fist and the barrel thick as a thumb. Russell brought the pistol up against his cheek. Cocked back the hammer. Inhaled. Then he pushed off from saloon’s outer wall and dove across the entrance.

A shadow paw swiped at Russell. Caught the crown of his hat, knocking the hat off his salt and peppery head.

Russell brought up and aimed his left pistol at the shadow feline. The shadow struck before the lawman could shoot. Heat scrapped across Russell’s hand and his flesh felt damp. Blood then. Pain screamed but the lawman had no time for pain. He bit his lip.

While swiping a clawed paw at Russell’s left gun hand, the shadow creature bounded over the lawman, landing at the bottom of the steps leading to the saloon’s porch. Dust stirred around the darkness.

Outside the close confines of the battle, Russell heard gawkers ducking back behind the safety of their hidey-holes. The whispers had stopped at some point.

The shadow feline bared down, poising its dark form to spring forward. Its black claws dug furrows in the ground as it did this. Its red eyes tracked Russell like prey. Like a rabbit too far from its hole and burrow.

Wasting no time, Blackrider’s shadow creature leapt at the lawman.

Russell already had his right side pistol angled up.

He pulled the trigger.

A flash of light brighter than the noonday’s sun burst against the shadow creature.

It cried out in agony, flew over Russell, and landed on the saloon’s porch on four paws but staggered to the side, disorientated, shaking. It’s form crackled and sizzled the way meat did on the griddle. A hole had appeared through its midsection. It’s face leaked. Shadow dripped like undried ink on a page.

Russell wasted no time. He unloaded two more bright rounds into the creature. The shadow screamed, turning away from the magical light burning its form away to a steaming puddle.

A fourth round exploded from Russell’s right pistol, pulverizing the dark to little more than dust.

Russell inhaled several breaths and wiped his braw with the arm of his empty hand. That hand was bleeding. Three deep cuts. No bone showing, thankfully, but pain pulsed in the back of Russell’s awareness. From around his neck Russell took his bandanna and wrapped his hand tightly, using his right hand and his teeth to cinch everything tight.

Placed off to the side a moment ago, Russell picked up his right pistol again in his unmangled hand. Then he headed out from under the porch overhang, down the three steps to the dusty empty road, and found his left pistol, the one loaded with everyday man-killing iron. Russell rolled his shoulders and stomped up the steps to enter the saloon and shoot Blackrider. The magic light from the right pistol would blind Blackrider and an iron round from the left pistol would pierce his heart and kill him.

Russell didn’t make it a foot past the entrance.

The shadows in the saloon writhed expectantly. Dozens of eyes bore down on the lawman. Dark tendrils reaching tentatively at the air. All while Blackrider took a long drag from the dusty, green whiskey bottle. He lifted the bottle from his lips, the neck still tipped over his mouth. Russell saw no whiskey come out. Not a drop. Blackrider peered inside and afterward shrugged with disappointment.

Glass shattered somewhere behind the bar.

Blackrider stood up from his stool, stretched from his tiptoes to his upturned arms, then he smacked his lips. Seeing Russell surprised him. For a moment.  Then he shrugged off the lawman’s living and smiled.

“You’re comin with me, Black,” Russell declared, raising his pistol.

“Oh, I’m going somewhere–” He stretched out his arms to the side. “–Just not with you, sheriff.”

Fingers wiggling, the shadows seemed to clench toward Blackrider like puppets on strings. He looked to the lawman and cocked his head.

Russell saw the other man’s eyes. There was no white. His eyes were completely pitch black.

“Will you be so kind,” Blackrider said to the sheriff, “as to move out of my way? Or should I make you move?”

Three high school teens in the woods on a Friday night… some beers… skaters with a grudge… what could go wrong? Add in a couple of genetically created … END_OF_DOCUMENT_TOKEN_TO_BE_REPLACED

A dark short story about one man’s oversight concerning his death.  Since dying was just not part of his daily routine, the man just went on with his … END_OF_DOCUMENT_TOKEN_TO_BE_REPLACED