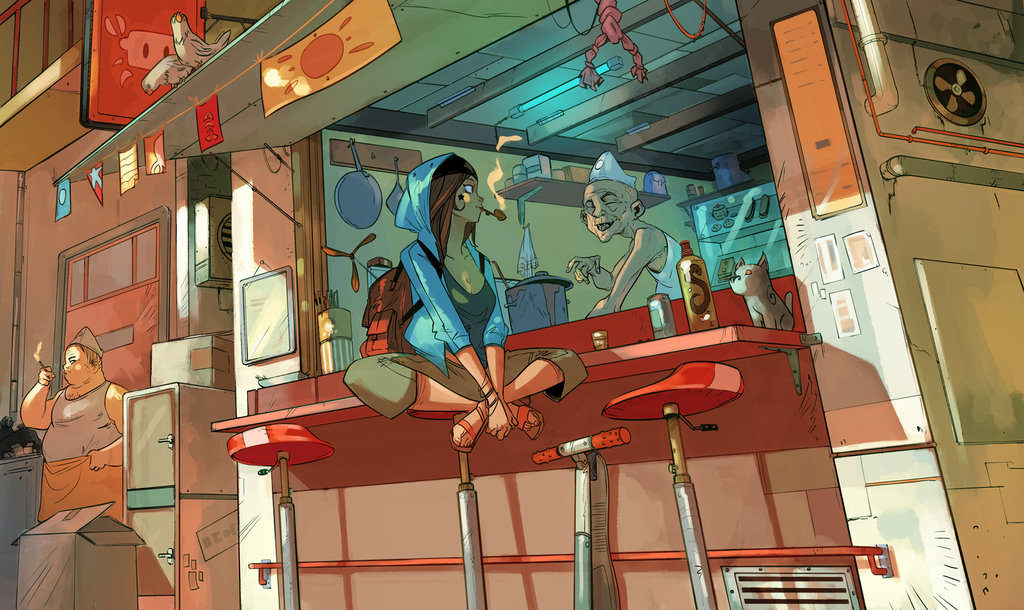 Midday in Tofo Cue blazed. Summer had come and announced itself boldly with heat, sweat, and the haze of sticky humidity.

Pippi rolled through the streets. Dodging rickshaws running past her in the opposite direction, whose drivers halfheartedly shook fists at her, called her “reckless” and “stupid girl”, but in the end kept on their way. The drivers were tired. Feet blistered as usual. Skin slick from the blistering heat. Armpits yellowed from labor and sweat.

One rickshaw nearly tipped over avoiding Pippi. That little mishap Pippi winced at, her shoulders hitting her ears, her hood flipping up with a quick hand to shade her blushing face despite the day’s heat.

She waved a hand at the grumpy noodle-like driver jumping and cursing at her. Even the passenger got in on the tirade and began cursing her to any god that would listen.

Well, the whole thing had been Pippi’s fault. She guessed. There were two lanes along the avenues for opposite traffic. She choose whichever based on her mood. Pippi was a go against the flow type of gal so she usually went against convention. Besides, this way the rickshaws saw her coming.

The complaints from the rickshaw driver and its customer faded behind Pippi’s back as she slapped the avenue with a foot and propelled her scooter forward at a faster pace. She bared down close the handlebars. Warm wind swept by her, taking with it beads of sweat but leaving her none-the-cooler.

A rumbling in her stomach soon compelled Pippi to stop. She groaned in response. Places to go. Places to be. She didn’t have time to stop for food! But her stomach didn’t care.

Something quick then, Pippi conceded to the rumbling.

Pippi looked up at the street signs and passing buildings and after a moment knew where she was. She immediately perked up. Her mouth watered.

A quick cut across two rickshaws and Pippi steered her scooter down and out an alley to another avenue dipping steeply. She crouched low and road the avenue’s slope, picking up speed, popping over bumps in the pavement with quick hops, swerving past rickshaws, leaving them puzzled with her dust and wind mere memories barely grasped.

Not but a handful of minutes later she skidded the scooter to a halt in front of a food stand. The stand poked out between two building, leaving the stand in cool shadow, a blemish in the asscrack of the two full restaurants on either side with tenements atop each. Both restaurants were closed. But Bota had his noodle stand open. Always open.

“Hey ya, Pippi!” Bota himself called, waving gangly arms at the scooter girl.

Pippi folded her scooter up and drew up to the stand’s counter. She smelled the starchy goodness and brine of the shrimp and crab meat fresh from the market a district over. She nearly floated on to the middle stool at the counter, legs crossed at the ankles.

“What’s good today?” Pippi asked, swinging her pack around and plopping it on the stool next to her.

Bota scowled. “Do you have to ask, girl? Everything is good. Everything. Everyday.”

Hand up to forestall any complaint, Pippi sighed.

“I was just making polite conversation, old man. Don’t be smoothen out your wrinkles.”

A cackle exploded from the tiny old man behind the counter. His open mouth showed few teeth but the smile was inviting and as good as his noodles were tasty. “We got noodles. Noodles. More noodles. And some critters from the sea by the bucket. Caught fresh this morn.”

From her pack Pippi pulled a pipe. “The usual.”

Bota sputtered and his smile fell. He wagged a finger at the girl. “You just asked me what I had to offer.”

Pippi shrugged. “You always have the same. And I always get the same thing: the usual. Besides… you only make. One. Thing.”

One eye squinting, Bota murmured something Pippi didn’t catch and turned to a stove nearly too small for the huge pot steaming and boiling atop it.

With a match struck across the counter’s splintery top, Pippi lit her pipe and inhaled deeply.

As Bota stirred the pot filled with what Pippi knew as ‘the usual’ or simply ‘goodness’ or even ‘the menu’, he said to the scooter girl, “Can’t remember a hotter day than this. I’ve got a lot of days in my pot too.”

Pippi exhaled a plum of smoke and pulled back her hood. “I hate sweating. Gets in all the wrong cracks.”

Bota put aside the large wooden spoon and took up a ladle and a wooden bowl. He scooped some of pot’s contents into the bowl and tossed it artifully in front of Pippi. Soup the color of a crab’s flesh sploshed on to the counter. He tossed her a spoon as an afterthought.

Another stream of smoke slipped between Pippi’s lips. Her eyes flicked down. Examined the bowl’s contents: two to three parts shrimp, the soup itself pipping hot. Perfect.

Pippi put her pipe aside, ignored the spoon Bota had placed in front of her, and took up the bowl with both hands.

She slurped. Two piece of shrimp tumbled into her mouth. Burning liquid slid down Pippi throat, filling her belly. Sweat leaked from her pores. Pippi closed her eyes. Licked her lips. Inhaled the steam from the bowl as she ground the shrimp up with her teeth.

When she eventually opened her eyes, Pippi found Bota with his arms crossed and leaning against the counter, watching her. An expectant, knowing grin hooked Bota’s old, wrinkly face. He looked like a happy potato.

Pippi matched the soup stand owner’s grin with her own. Bota let out a guffaw. A howl. Then they both quieted and bowed, Pippi over her bowl.

“Not so hot a day to ignore good soup,” she told Bota, nodding to him, before taking another long sip.

The sun was up. Big as a fist held high. Barely a wind caressed the avenue running along the side of two restaurants and a tiny shop easily overlooked as a rundown shack.  Yet under the shop’s awning the shade was cool and the smells wafting from the overly large pot set upon the comically small stove were inviting.

Three high school teens in the woods on a Friday night… some beers… skaters with a grudge… what could go wrong? Add in a couple of genetically created … END_OF_DOCUMENT_TOKEN_TO_BE_REPLACED

A dark short story about one man’s oversight concerning his death.  Since dying was just not part of his daily routine, the man just went on with his … END_OF_DOCUMENT_TOKEN_TO_BE_REPLACED