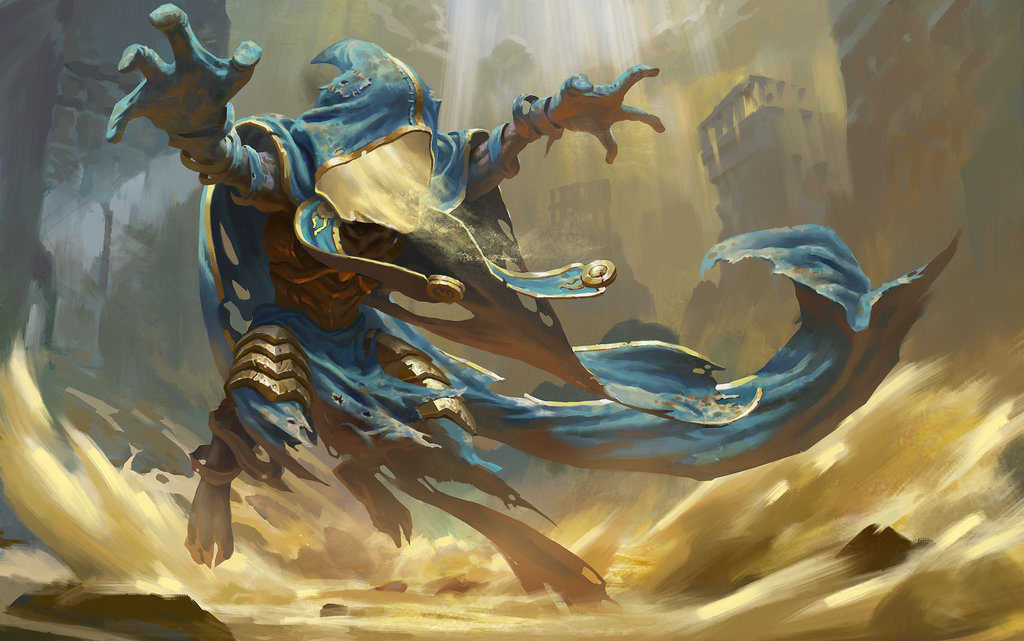 the son of sand by 0BO on DeviantArt

A rhyme his older sister used to sing to him came to Dusty’s mind: Sandman gonna get ya. Gonna snatch you by the leg. Pull you done. Choke you with sand. Pull you beneath the sand. Sandman gonna take ya.

Dusty’s older sister died after he joined the legion. Not before the end of his first year did he get the letter from his mother begging him to come home. But he didn’t go home.

He remembered reading the letter. Terrified. All he could think of was that damn rhyme his older sister used to scare him.

He remembered holding the letter and murmuring: “Sandman gotcha ya, Val.”

Now Dusty stood before the Sandman. A nightmarish ghoul every child with a half an imagination feared as long as the empire had been at war with Dusk Tribes. And that was a long time.

Dusty and several soldiers from his unit huddled on the other side of a sand dune. The shifting sands glared the afternoon sun’s blistering shine. Shading his eyes, Dusty could make out the top of a wall. A great expanse of limestone that wrapped around Cortamaloy, a Dusk capital the empire was keen to take. At Cortamoloy’s heart waited a spring of clear water. Something the empire’s army wanted. Needed.

Few of the city’s guard remained, those who’d tried to hold against the empire’s army. All Dusty and his mates had to do now was lead a charge for a battering ram aimed right up the wall’s asshole.

But the soldiers didn’t need the battering ram.

Just before Dusty and the other soldiers were about to head over the dune, that’s when Cortamaloy opened its gates and a handful of robed sand mages trotted out. Immediately the mages began chanting.

Their rising words churned the sands. Kicking up hot wind that hollowed with the spirits of the Dusk that the empire had pilled up to make its way to Cortamaloy. A cyclone of sand gathered. Spinning between Dusty, his fellow soldiers, and their goal.

Energy exploded out from the cyclone, striking Dusty like a fist to the gut.

His fingers slipped from his spear as he hit the sand. His helmet knocked off his head. Sand wedged itself in his eyes. He raised a hand to rub the grit from his gaze. When he opened his yes again, the cyclone had settled amongst the sand. Around him the other soldiers were shaking off their own daze from the same sand attack. But they were alive. Alive and still filled with spit and grit. Was that magic supposed to–

In front of the downed soldiers the mages from Cortamaloy stood. Arms raised. Heads bowed. Not moving. Not chanting. They dropped to their knees and prostrated themselves.

He grabbed for his fallen spear. Slammed his helmet back on his head. All of his fellow soldiers in his similar uniform picked up their weapons and began to close in on the mages. After four days of battle, defending their city’s wall, what remained of the mage cabal were spent. Their last attack had fail–

A shadow fell over the empire soldiers, cutting off their path to the mages.

The empire soldiers, including Dusty, raised their heads. The mages across from them raised themselves up in adulation.

Dusty saw bellowing blue cloth. A shadowed hood. Sand pouring out of that darkness. Tumbling from the emaciated chest in the open robes.

Someone called for a retreat, ordered everyone to back up and move to the other side of the dune in front of the city. A small sandy hillock but protection.

Val’s rhyme started echoing in Dusty’s mind then as he struggled to climb back up the dune. Sandman gonna get ya…

The shadow summoned by the Cortamaloy mages followed the empire soldiers, hovering in the air.

As Dusky climbed the dune his feet sunk to the top of his boots, sending him to his knees. Holding on to his spear he climbed on his hands and knees, pulling his stuck feet out and forward. That’s when he felt the sands slipping past him, not like flowing water from a river, but like rain falling back up from when’s it came. Dusty couldn’t make his body move as he watched hundred, thousands of grains rise up into the air. Unnatural. Godly. Was this the power of the Dusks’ desert gods?

Dusty scrabbled up the dune along with the other–

Soldiers around him began screaming. Then they began to tumble back down the dune. The sand turned from yellow to red. Red like blood.

Dusty watched as the grains of sand rising up in the air began to take shape around the blue cloaked figure. Lances. Spikes. Hammers.

Spear points pierced the soldiers to Dusty’s left and right.

A soldier ahead of Dusty, not two feet in the lead, a sergeant, looked back over his shoulders at the Cortamaloy mage’s ghoul. He snarled. Shouted curses. Shouted the names of the–

A hammer like loadstone, made from the desert’s body, slammed into the side of the sergeant’s head, bludgeoning the man, sinking in his temple, spraying crimson. Dusty’s sergeant rolled limply down the dune.

That cold shadow cast itself over Dusty as he bore witness to another two soldiers’ impaling.

He didn’t realize he was screaming nor the cold sweat slicking his back.

White knuckling his spear, Dusty moved up the dune along with what remained  of his company, what remained of his brothers and sisters. He didn’t look back at the empty hood pouring out a dozen lung fulls of sand. Not until he leaped and rolled down the other side of the dune, nearly impaling himself on his own spear.

Sandman gonna get ya, his older sister’s memory taunted Dusty.

The sand ghoul’s shadow seemed to spread out as it crested the dune’s hilly top.

Sand rained down on Dusty’s head. Rained down all around. A desert storm.

When Dusty finally managed to look up, he saw not the ghoul but the dune itself rising up, curling, a wave of sand enclosing on Dusty and the other empire soldiers, threatening to crash down and smoother them all.

Dusty drew in a deep breath and exhaled while saying, “Sandman here to get me…”

Three high school teens in the woods on a Friday night… some beers… skaters with a grudge… what could go wrong? Add in a couple of genetically created … END_OF_DOCUMENT_TOKEN_TO_BE_REPLACED

A dark short story about one man’s oversight concerning his death.  Since dying was just not part of his daily routine, the man just went on with his … END_OF_DOCUMENT_TOKEN_TO_BE_REPLACED