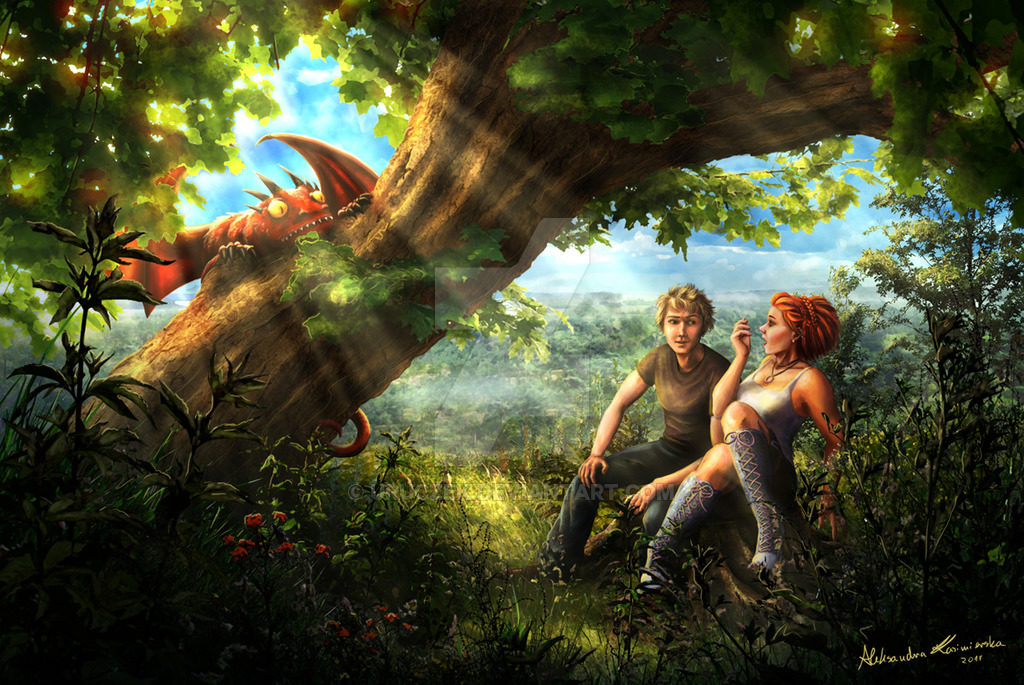 Unusual date by Uruczek from DeviantArt

Rodney drew in a few quick breaths to his screaming lungs. “What… makes… you… say that?”

Barbara shook her head. For a moment Rodney thought her upset, regretting coming out with him today. But then she winked at him in silent, companionable humor, and bounded forward. “If we don’t make it to the end of the path, you won’t get your surprise.”

“Surprise?” Rodney’s heaving breath caught and his moist skin began prickling with excitement. “I set this day up.”

“You have your surprises and I have mine,” Barbara told him as they made their way down the winding path. “C’mon. Try to keep up.”

A renewed sense of urgency and elation kickstarted Rodney. He no longer felt winded. His lungs seemed buoyant. The fatigue in his legs was a distant thrum at the back of his awareness.

Spring had bloomed in the hills outside their small sleepy town, bringing renewed life after months of chilly cold and wet, soggy days. The grass a vibrant, healthy green. Tree bows hung heavy with blossoms. Birds chirped all around the two teenagers. The sun filled the sky boldly with warmth but the air felt cool and refreshing, touched with a gentle breeze.

Barbara spread her arms. Let her fingers touch the leaves from bushes trespassing on the path. Those thin branches whipped back at Rodney, tickling his arms as he followed the redheaded girl.

“Do you know where we’re going, Barb?” Rodney asked.

She shrugged and then twirled to regard him, back peddling to keep her jogging pace.  “I figure you’ll tell me if I go passed a turn or your carefully planned spot.”

Turning back around, Barbara nearly tripped over a thick man-sized log rotting over the side of the deer run. She skipped over the damp, dark wooden object, her booted toes scrapping the bark, knocking the log a couple of paces down the run.

Tiny specks of light scattered from beneath and out of the log. Each speck’s flurry was accompanied by an irate ringing. The furious chorus like a tolling of a dozen hand bells. Light swirled around Barbara, the person who’d kicked the home of the specks. She batted the specks. Brushed them from her hair. Slapped those that landed on her uncovered arms. Barbara let out a screech of her own indignation as more attacked her face.

Rodney rushed to Barbara’s aid and joined his companion in shooing the specks of light.

By accident, the teenage boy’s flat bladed hand brushed the girl’s cheek. The contact a little too hard. The suddenness elicited a peevish grunt and Barbara struck out, slapping Rodney full in the face.

Barbara’s hands went up to her face with dismay as she realized her error and watched Rodney’s cheek grow red with her handprint.

“Rodney!” Barbara swatted at a couple of the specks buzzing around her face. “I’m so-so sorry.”

Rodney rubbed at his cheek and felt a tenderness underneath his eye. Wait a-go, slick. Despite Barbara insistence to take the fault, Rodney silently admonished his own clumsiness. There were also the pests to consider for the blame.

“Stupid fairies.” He mumbled to himself.

Nose scrunched up, eyes closed to slits to keep the specks from gouging her eyes, Barbara took tentative steps toward Rodney, who was himself consumed by the pain on his face. Neither noticed the other and collided. Barbara’s feet tangled with Rodney’s and both went down.

A cloud of dust plumed around the sprawled teens as they lay in the dirt, Barbara on top of Rodney.

Above them, the specks of light tittered mischievously and then flittered away.

Together the teens said, “I hate fairies.”

They looked at each other. Tiny red bit marks marred Barbara’s upper arms and face. A red mark in the shape of a hand stamped Rodney’s left cheek. Together they laughed in shared humiliation.

The teenage boy’s entire body grew hot and in that moment he barely felt the pain on his cheek. All he could feel was Barbara’s body shaking with glee, her weight pressed so close to him, her skin on his skin, slick with sweat.

She shook her head against his chest then looked up at him. “I see this was part of your plan all along…”

She saw his confusion, looked down at him, gestured at their entwined bodies in the middle of the deer run, and smirked.

That warm feeling all over Rodney’s body got uncomfortably hotter. Words failed to launch from his mouth and form an explanation.

“Sorry about the bites,” Rodney said. He slid a thumb over the raised pinprick welts on Barbara’s skin.

She shrugged. “Not your fault. I was the one who kicked the log.”

“You also smacked me.”

“You might’ve deserved that one.”

She rolled her eyes unbelieving. “Sure you did.”

Awkwardness settling in, replacing the pleasant warmth he’d felt with having Barbara fall atop him and stay astride him, Rodney began to look anywhere but Barbara.

You’re blowing this. You’re annoying her. And you nearly got her eaten by fairies!

Barbara took Rodney’s cheek in her hand and brought his face forward, to look at her. Her eyes sparkled. Her head dripped. Their lips met. And that warmth returned and spread throughout Rodney’s body once more.

When Barbara eventually drew away, slowly, she brought with her a smile for Rodney. “Like I said, Rodney, you need to loosen up.”

“I’m having a good time,” Barbara told him.

“Me too,” Rodney agreed.

“By the way… that was your surprise.” Barbara winked at him.

“I liked the surprise.” He stammered, unsure if he should ask. To hell with it! “Is there more surpises?”

Something suddenly caught Barbara’s attention. “Huh. Rodney, look at that…”

Hands placed on Rodney’s chest, Barbara pushed herself up and looked back down the trail. Rodney turned as best he could with Barbara still sitting astride his midsection. To him, the forest was cockeyed, nearly upside down.

Barbara pointed to a thick-trunked tree growing not toward the sky by the path but sideway. It stood on a small rise and stretched out over the shelf. Sunlight streamed through its branches.

Just then, the dragon spread its wings, reared up, and puffed out its chest and the cheeks along its narrow snot.

Barbara obviously sensed the danger. She scrambled up and off of Rodney as the dragon belched a stream of fire toward the teens.

“Oh shit!” Rodney felt paralyzed as the air around him grew hot. He smelled burning leaves. Heard the crackling of scorched leaves, like from a campfire.

Barbara reached out, grabbed Rodney’s hand, pulled him to his feet, and dragged his stupefied self into a run.

“Don’t take this the wrong way, Rodney…” Barbara said as they ran further down the deer run. The dragon had launched itself into the air to pursue them. “… But right now I really wish you’d taken me bowling.”

“Yeah. I’m regretting the stroll in the forest as a date idea myself right about now.”

Three high school teens in the woods on a Friday night… some beers… skaters with a grudge… what could go wrong? Add in a couple of genetically created … END_OF_DOCUMENT_TOKEN_TO_BE_REPLACED

A dark short story about one man’s oversight concerning his death.  Since dying was just not part of his daily routine, the man just went on with his … END_OF_DOCUMENT_TOKEN_TO_BE_REPLACED