This week I finished reader “Pathfinder” by the great Orson Scott Card. This is the first novel in a new series. 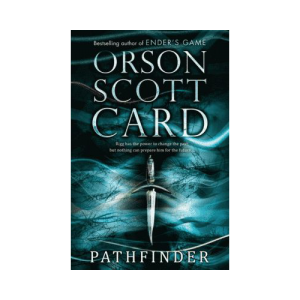 A powerful secret. A dangerous path.

Rigg is well trained at keeping secrets. Only his father knows the truth about Rigg’s strange talent for seeing the paths of people’s pasts. But when his father dies, Rigg is stunned to learn just how many secrets Father had kept from him–secrets about Rigg’s own past, his identity, and his destiny. And when Rigg discovers that he has the power not only to see the past, but also to change it, his future suddenly becomes anything but certain.

Rigg’s birthright sets him on a path that leaves him caught between two factions, one that wants him crowned and one that wants him dead. He will be forced to question everything he thinks he knows, choose who to trust, and push the limits of his talent…or forfeit control of his destiny.

As always. Card has created a sophisticated and smart read. The novel is for young adult readers but this does not stop him from treating his young readers as equals. The vocabulary is at times simple, creating a straight-forward reading experience but for the majority of the novel Card choice of words could be construed as beyond the abilities of younger readers. Good and bad. It forces younger readers to look up the words they may not recognize. On the other hand, it draws the reader away from the story.

I respect Card’s ability for creating smart, witty characters. He sometimes goes a little too far with those characters who are below eighteen years of age. The level of arrogance the characters possess is sometimes unbelievable. The younger characters in Card’s novels, “Pathfinder” especially, are intelligent and have no problem mouthing-off to adults and demonstrating their superior intellect. In “Pathfinder”, at times I wanted to smack the two leading heroes (Rigg and Utho), both of them between thirteen and fifteen. For me, this takes away the characters’ innocents and likability–to a degree. That’s not to say Card’s creations are infallible; Rigg’s arrogance can get him into tough spots and his ability to think around problems make his escapes believe and fund to read.

Card also plays around with time travel concepts in this novel. At times the ideas are confusing as the reader is only given bits and pieces of information. This is Card’s plan. He embraces the paradoxes within the concepts of time travel and has fun with each rather than making time travel logical. Don’t worry, read the acknowledgments following the last chapter, the author does not explain away the paradoxes but explains a few things that left me confused.

All in all, a fun read. The fantasy world is intriguing and it’s genesis is the most interesting part. The separate story being told at the beginning of each chapter hints at the details behind how the world of Garden was created but there are still many questions left unanswered, which will keep me waiting anxiously for the sequel.

Three high school teens in the woods on a Friday night… some beers… skaters with a grudge… what could go wrong? Add in a couple of genetically created … END_OF_DOCUMENT_TOKEN_TO_BE_REPLACED

A dark short story about one man’s oversight concerning his death.  Since dying was just not part of his daily routine, the man just went on with his … END_OF_DOCUMENT_TOKEN_TO_BE_REPLACED