I just finished Brandon Sanderson’s “Alloy of Law”, the fourth book in the Mistborn series of books… though the book is a stand alone novel. 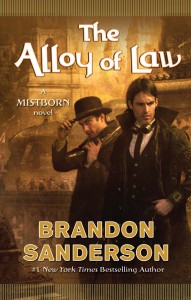 Three hundred years after the events of the Mistborn trilogy, Scadrial is on the verge of modernity, with railroads to supplement the canals, electric lighting in the streets and the homes of the wealthy, and the first steel-framed skyscrapers racing for the clouds.

Kelsier, Vin, Elend, Sazed, Spook, and the rest are now part of history—or religion. Yet even as science and technology are reaching new heights, the old magics of Allomancy and Feruchemy continue to play a role in this reborn world. Out in the frontier lands known as the Roughs, they are crucial tools for the brave men and women attempting to establish order and justice.

One such is Waxillium Ladrian, a rare Twinborn who can Push on metals with his Allomancy and use Feruchemy to become lighter or heavier at will. After twenty years in the Roughs, Wax has been forced by family tragedy to return to the metropolis of Elendel. Now he must reluctantly put away his guns and assume the duties and dignity incumbent upon the head of a noble house. Or so he thinks, until he learns the hard way that the mansions and elegant tree-lined streets of the city can be even more dangerous than the dusty plains of the Roughs.

I’ve missed Sanderson’s Mistborn universe. “Alloy of Law” is just the treat I was craving, a taste of the Mistborn world while I wait for Sanderson to write his second trilogy. Oh, and what a taste! The only thing bad is that in “Alloy of Law” you can sense a larger story being crafted, perhaps an epic conflict that will lead into the second Mistborn trilogy. Whether that was Sanderson’s intention or I’m wishing for some huge machination… who knows. Bottom line, “Alloy of Law” was fun and I could not put it down.

The action and adventure is fast paced and exciting. It’s what Sanderson does best. However, what I loved about the novel was Sanderson’s ability to infuse multiple genres to create a fantastic setting all its own. You have a hero who strolls into town, he’s an outsider and doesn’t fit in and his gun’s all the way cocked. Sounds like a western? Wait. But there’s magic in the story, Allowmancy from the original Mistborn books–the ability to ingest metal and use the metal to fuel immense powers–returns but its expanded on and made fresh. “Alloy of Law” also is a mystery; Sanderson’s protagonist is intelligent and dangerous with his wit as well as his guns, Wax is a wizard-like Sherlock Holmes who with his trusty sidekick must solve a series of crimes before more innocent lives are lost. That is three genres being bent into one cohesive novel. Sanderson does this well.

As always Sanderson’s characters shine. Wax and Wayne (the funny sidekick who steals every scene) are brilliant new additions to the Mistborn universe. They are heroes with their own demons and conflicts, which play well into the novel’s narrative and help move the characters down their paths toward the main action. No moment of self-reflection bogs down the story. And each character has his or her own quirks that stays in the readers’ minds, making each memorable.

There are a lot of moments, nods that readers of the first Mistborn trilogy will get and find themselves smiling about immediately after they realize the connections. Sanderson’s world is ever connected, “Alloy of Law” relies on the Mistborn story for its genesis but this is not a crutch. New readers can come in and not get hung up too badly on the inside references to the previous novels. Though, having read the original three books, the buildings blocks that the “Alloy of Law” world is set are made that much more special and fun when discovered.

Lastly. This is a great stand alone book. It’s also a good jumping off point. Nothing about what happened in the original Mistborn books is spoiled here. New readers can read “Alloy of Law” first and not be spoiled by the surprised in the first three novels. It will only enrich the overall experience. It’s comparable to seeing a beautiful child, you don’t need to see the mother and father to appreciate the cute nose and quirky smile of the child but it’s fun to understand where those traits originated.

Three high school teens in the woods on a Friday night… some beers… skaters with a grudge… what could go wrong? Add in a couple of genetically created … END_OF_DOCUMENT_TOKEN_TO_BE_REPLACED

A dark short story about one man’s oversight concerning his death.  Since dying was just not part of his daily routine, the man just went on with his … END_OF_DOCUMENT_TOKEN_TO_BE_REPLACED