Anyone who knows me knows that my love of reading and writing originated with two novels, Dean Koontz’s “Lightning” and Stephen King’s “The Gunslinger”. The summer before my high school freshman year, my dad gave me those two novels in an attempt to spike my interest in reading. While most writers found the path toward the fantasy genre through Tolkien, I found the path thanks to King.

King’s Dark Tower series, the first novel being “The Gunslinger”, was my Lord of the Rings. It combined the fantasy, horror, and western genres into one grand epic. The series surrounds gunslinger Roland Deschain as he journeys to save his dying world by preventing the Dark Tower (the center of all existence) from falling. The fandom behind the Dark Tower is a cult. If King is remembered for any of his novels, it will be for his seven Dark Tower books. But wait… Roland’s journey doesn’t end at seven books.

Come 2012, King is releasing another Dark Tower book called “Wind Through the Keyhole”. This addition to the series will be taking place between “Wizard in Glass” and “Wolves of Calla” and will explore an adventure from Roland’s youth. “Wind Through the Keyhole” has me excited for two reasons. One, it’s a Dark Tower book. Enough said. Two, “Wizard in Glass” was my favorite book in the series because King went back to focus on Roland as a young man (before be began his quest for the Tower); “Wind through the Keyhole” is telling another story from Roland’s youth.

Below is the newly released cover for the new novel. King and his publisher released it and a preview of the novel a few days ago. 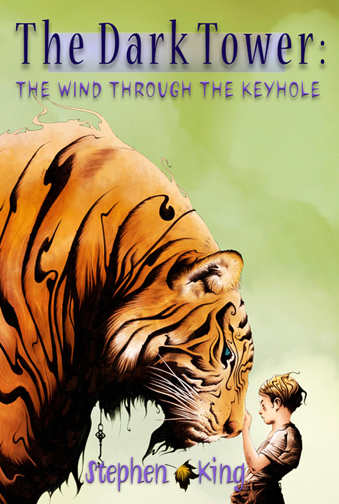 Jae Lee, a comic book artist and the man behind the art in the Dark Tower comic book series, has lent his talent to cover. I cannot be more excited. The cover is beautiful. I desperatly want to know what is up with the key around the tiger’s neck! This is just getting me more jazzed.

For more on the Dark Tower series and “Wind Through the Keyhole”, visit the official website by clicking here.

Three high school teens in the woods on a Friday night… some beers… skaters with a grudge… what could go wrong? Add in a couple of genetically created … END_OF_DOCUMENT_TOKEN_TO_BE_REPLACED

A dark short story about one man’s oversight concerning his death.  Since dying was just not part of his daily routine, the man just went on with his … END_OF_DOCUMENT_TOKEN_TO_BE_REPLACED