I am a fan of Michael Scott’s Flamel books. Scott is not reinventing the wheel with these stories. What he does best is meld the different myths of dozens of cultures into a fun adventure. For those who don’t know, the Flamel books are speculative contemporary fantasy. Imagine if all the myths and legends in human history were real… gods, heroes, immortals, demons, and monsters all exist and live in the 20th century. The bad guys, called the Dark Elders, want to rule over us puny monkeys and will do whatever necessary to bring about a new age of darkness and magic. Enter a set of twins who are prophesied to either save us or help the Dark Elders. They’re mentor is Flamel. At every turn the twins are dogged by the Dark Elders and their thugs. However, along their journey the twins do meet famous people from history and living gods who wish to aid them, some who even succeed in teaching them the mysteries of magic. Two of those individuals are Joan of Arc and Scathach. 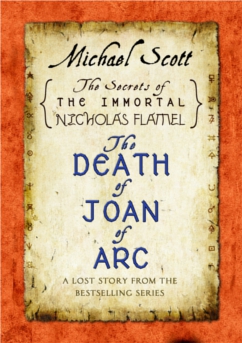 Joan of Arc was not burned at the stake in Rouen, France in 1431. She was rescued from certain death by Scathach the Warrior.

The truth about that day is revealed in the last will and testament of William of York, and it will leave you wondering: does Joan of Arc still walk the earth? Michael Scott’s first-ever exclusive ebook short story delves into the world of the bestselling series The Secrets of the Immortal Nicholas Flamel and offers readers a never-before-seen lost story—the story of two warriors who would become sisters.

“Death of Joan of Arc” is a short story in the Flamel books and is centered around Scatty and Joan. If you haven’t figured out the conflict by the title of the short story, well, I’m sorry. There is a ton of action in this little tale, it has Scatty doing what she does best… kicking butt! Devoted readers to Scott’s book series will have wondered about the details behind Joan’s death and how she is living in the 20th century and helping the twins of prophecy, and this story shines a dim light on that. There are two things I have a problem with concerning this story. First, I wish Scott had told the story through Joan or Scatty’s eyes. Instead, the story is an account by a dying, famous archer who was there that day when England tried to burn Joan at the stake. Second, I wish the story was longer! I wanted to see how Joan became immortal, how she met the Flamels and established their parent-daughter bond (this takes place shortly after this short story, as the series elude). As an alternative, we get a lot of action in a small package. Not bad but it leaves me wanting, leaves me a man dying in the desert who wants water but only gets a drop of liquid. (sigh) And the next book so months away, I can’t wait and I’m SO thirsty!

It’s not a bad story, just a SHORT story. I wish to have had more meat on the bones. The story is a footnote in the Flamel books. that said, “Death of Joan of Arc” is still a fun ten or so minute read.

You can also find this review on good reads by clicking here.

Three high school teens in the woods on a Friday night… some beers… skaters with a grudge… what could go wrong? Add in a couple of genetically created … END_OF_DOCUMENT_TOKEN_TO_BE_REPLACED

A dark short story about one man’s oversight concerning his death.  Since dying was just not part of his daily routine, the man just went on with his … END_OF_DOCUMENT_TOKEN_TO_BE_REPLACED