I finished “Rise of Renegade X” this week. It was written by a talented new writer named Chelsea Campbell. I couldn’t put the book down on Sunday, loved it.

Here is how Goodreaders describes the book: 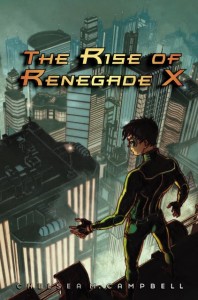 Sixteen-year-old Damien Locke has a plan: major in messing with people at the local supervillain university and become a professional evil genius, just like his supervillain mom. But when he discovers the shameful secret she’s been hiding all these years, that the one-night stand that spawned him was actually with a superhero, everything gets messed up. His father’s too moral for his own good, so when he finds out Damien exists, he actually wants him to come live with him and his goody-goody superhero family. Damien gets shipped off to stay with them in their suburban hellhole, and he has only six weeks to prove he’s not a hero in any way, or else he’s stuck living with them for the rest of his life, or until he turns eighteen, whichever comes first.

To get out of this mess, Damien has to survive his dad’s “flying lessons” that involve throwing him off the tallest building in the city–despite his nearly debilitating fear of heights–thwarting the eccentric teen scientist who insists she’s his sidekick, and keeping his supervillain girlfriend from finding out the truth. But when Damien uncovers a dastardly plot to turn all the superheroes into mindless zombie slaves, a plan hatched by his own mom, he discovers he cares about his new family more than he thought. Now he has to choose: go back to his life of villainy and let his family become zombies, or stand up to his mom and become a real hero.

I wish there were books like “Rise of Renegade X” on the shelves at my school library when I was that tender, impressionable age. Maybe I would have gotten into reading earlier than I did. This novel is perfect for boy readers who have a hard time making the transition between comic books to novels. Author Chelsea Campbell does well in transplanting the action of a superhero story into a novel. Yeah, there are cliché moments and tongue-and-cheek dialogue, but regardless I had fun. The novel does not take itself seriously and so it’s charming. It. Is. Fun! More often than not, I found myself grinning from ear-to-ear like a crazed fool.

Each of the characters here has his or her own voice, a unique personality that distinguishes them. More importantly, no one is wearing a black or white jersey. Well, some characters do. Most are wearing grey. It’s the supervillians who tend to be typical and who live up to expectations. What I found wonderful and interesting are the moments when the heroes act like villains; I won’t throw out a example and ruin the fun of a particular scene. This is what makes main character Damien Locke so fun to read, though. He’s in a moral grey area. Like his codename—Renegade X—suggests, he’s caught between two worlds, his mom is a supervillian and his dad’s a superhero. Are villainy and heroism products of how one is raised or something more deeply seeded? That is the question in the novel that Damien has to answer. Nature or nurture? And you know what, though he does some maniacal, evil things, I was cheering for him every step toward the climax.

Another thing about Damien that makes this novel shine is his voice, the first-person narrative style. Damien is our narrator from beginning to end and his voice is snarky, smart, and wickedly fun. His comments on the world around him are hilarious and sometimes heartbreaking. Everything comes at the reader fast, which moves the story along at a great pace.

One other point I want to make. The narrative, Damien’s thoughts and actions as well as the actions of people around him, can veer into adult situations. There is talk about sex, promiscuity, and the characters do curse. None of this marks the book as R or NC-17. In fact, I applaud the author for being so bold as to not shy away from these issues. She handles everything tastefully and with tact. Kudos, Ms. Campbell, for adding a little steam to the story that makes the narrative realistic but not smutty; boy’s won’t gag over some of the more tender or explicit scenes either.

Bottom line, this is a fun and awesome read for a teenage boy. Damien Locke is trying to discover and struggling with who he’s supposed to be, and every teenage boy will relate to the journey he takes in “Rise of Renegade X”.

Head on over to the author’s site by clicking here.

Three high school teens in the woods on a Friday night… some beers… skaters with a grudge… what could go wrong? Add in a couple of genetically created … END_OF_DOCUMENT_TOKEN_TO_BE_REPLACED

A dark short story about one man’s oversight concerning his death.  Since dying was just not part of his daily routine, the man just went on with his … END_OF_DOCUMENT_TOKEN_TO_BE_REPLACED