Finished Chelsea Campbell’s newest novel, “Harper Madigan Junior Private Detective – Dropped Diva”. I am not a crime novel reader but after loving Campbell “Rise of Renegade X” novel, I had to pick this up. Plus, this is a self-published novel and I want to support the author taking that leap into the future of publishing. Hey! We self-published authors have to stick together.

Here is how Goodreads describes the novel: 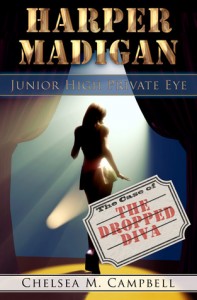 7th grade detective Harper Madigan works alone. He doesn’t need the vice principal assigning him a new partner to keep him in line, especially a stuffed-shirt wannabe-journalist who totally cramps his style.

And he especially doesn’t need his troublemaker ex-girlfriend showing up out the blue and asking for his help. She’s accused of attacking the star of the school musical, and with her less-than-sparkling track record, she’s only one suspension away from getting expelled.

Only Harper believes she’s innocent, and now it’s up to him to prove it, even if it means making an enemy of the PTA mafia, risking his agency, and confronting the mistakes of his own dark past. But when his new partner insists on doing everything by the book, and his old nemesis–the one bully he can’t catch–starts harassing his clients, it’s going to take more than just detective work to solve the case.

Main character Harper Madigan is a tough as nails, down on his luck detective with a dark past and a lot of demons… he’s also in middle school. Don’t let that final fact take away from how the book succeeds as a detective thriller. Campbell took all the aspects of a good detective yarn and tweaked them so they fit into a middle school setting. There is a crime underworld run by the bullies. At the top of this seedy underbelly is a mob-like organization, the adults, the parents comprising the PTA. Come on! Who else would be behind the curtain pulling the strings? Every character that stepped on to the stage was unique and colorful with a big personality. Harper is cool as cucumber (to borrow the expression from Campbell). He has a straight-laced partner trying to play by the book and keep him out of trouble. There is the dame Harper loves but who is always going to pull him into trouble. His archenemy is evil, intimidating, connected with top ranks of the PTA, and no one dares mess with him… no one but Harper Madigan! And of course there is the little guy, the underdog that needs a hero to believe in him or her.

Yes, the plot is not anything that is breaking down walls and turning the genre on its head. But that is the charm. This feels like a detective novel and it has the trappings of that type of novel. Kudos to Campbell for embracing those aspects and recoloring the setting. The twists can be seen coming. Regardless, there are enough twists to keep the pages turning fast and that makes this a fun read.

“Dropped Diva” is very much like a combination between the TV cartoons “The Kids Next Door” and “Fillmore”. Both of which were cute and fun, packed full of adventure.

Hopefully Campbell will write more about Harper and his cases. I will pick them up. This is also a self published work. Support the author and self publishing, because this is the future publishing. Visit the author’s site to support her, click here.

Three high school teens in the woods on a Friday night… some beers… skaters with a grudge… what could go wrong? Add in a couple of genetically created … END_OF_DOCUMENT_TOKEN_TO_BE_REPLACED

A dark short story about one man’s oversight concerning his death.  Since dying was just not part of his daily routine, the man just went on with his … END_OF_DOCUMENT_TOKEN_TO_BE_REPLACED