I finished Dan Well’s “Partials” more than two weeks ago. So this review is long overdue, not because I didn’t like the book–on the contrary I really enjoyed the novels–but… I don’t know. No excuses. Other things side tracked me. Anyway, “Partials” is a worth while read that I could not put done, reminds me of the late nights (or mornings since sometimes I stayed up until 3AM) I spent watching “Battlestar Galactica”. There is a good reasons too… 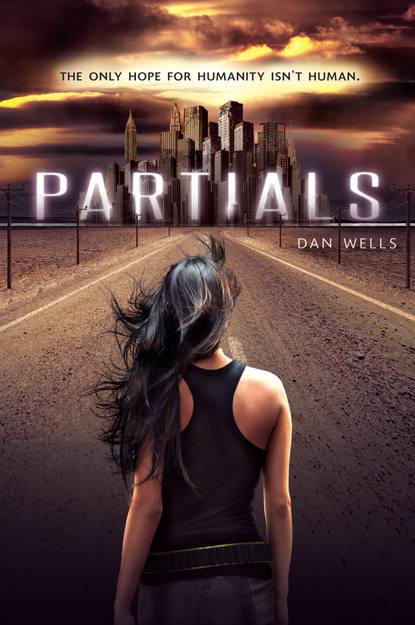 Humanity is all but extinguished after a war with partials—engineered organic beings identical to humans—has decimated the world’s population. Reduced to only tens of thousands by a weaponized virus to which only a fraction of humanity is immune, the survivors in North America have huddled together on Long Island. The threat of the partials is still imminent, but, worse, no baby has been born immune to the disease in over a decade. Humanity’s time is running out.

When sixteen-year-old Kira learns of her best friend’s pregnancy, she’s determined to find a solution. Then one rash decision forces Kira to flee her community with the unlikeliest of allies. As she tries desperately to save what is left of her race, she discovers that the survival of both humans and partials rests in her attempts to answer questions of the war’s origin that she never knew to ask.

Dystopian fiction for young adults is huge right now with the “Hunger Games” blowing up into a world-wide phenomenon. Dan Well’s “Partials” (the first novel in a planned series) is one of these books and I am happy to report that I enjoyed the story more than the “Hunger Games”.

Basically, in “Partials” we have a world ravaged by war. Humans created synthetic humanoids to fight their wars. When the wars ended the Partials rebelled and wiped out nearly the entire human race by using a mysterious virus that decimated the human population. That virus currently keeps the remaining humans sterile, unable to conceive and repopulate the world. At the start of the novel the remains of the human race is existing clustered on Long Island, ever vigilant for attacks from the Partials, and quickly arriving at the same fate as the Dodo bird. The novel opens and proceeds to tell the story of Kira, a young woman around 17, who ventures to save her race by finding a cure to this virus.

To say anything more would ruin the “Partial” reading experience. There are so many twists and turns in this novel. Wells does a great job of telling the readers what they should know of the world, the history, the factions at war. Then what we know is turned upside down and tossed out the window. Great for page turning. I found myself flipping pages like mad over a single weekend.

The one gripe I have is the science. Wells gets deep into the science the same way fantasy authors dig deep into a magic system. This is probably me. I’m not a science nerd and the subject can bore me. Wells demonstrates an acute knowledge of genetics and medicine and spends time explaining sciencey things that went over my head. These are the slow parts of the novel that can drag. However, paying attention pays off toward the end of the book as pieces start falling into place. “Oh! Wait! That thing that he explained earlier, 100 pages ago… NOW it makes complete sense!” Face palm! Here is where the twists come in, the science helps them along. Wells knows what he’s writing thankfully. What the science also does here is give the reader a sense of how daunting it is to find a cure for this virus that killed most of the human race and prevents those who remain from reproducing. The science is so complicated and so real it’s frightening and I personally felt helpless, I can image how the characters trying to solve the world’s repopulation problems felt. Good job Mr. Wells.

Another thing Wells does well is humanizing the antagonists. The Partials are presented at first as little more than synthetic humans, no more than an Arnold Terminator from “T2”. That’s how the humans who remain in the world see their greatest enemy. But the Partials are more human than originally believed. The author uses a character by the name of Sam, a Partial, to give the reader insight into the Partials for the readers. And Sam is probably one of the more interesting characters.

All the other characters show little development. But this is not a bad thing, to me. Each character has their own personality and agendas and beliefs. All of this helps the reader understand their actions and choices throughout the book. The story is the real star in “Partials”, the story, Sam, and protagonist Kira.

Kira is the perfect protagonist. She is not whiny like some female heroes can be. She desires to be strong and is so. Each conflict that arises she grasps by the horns and rides to submission. Most of the time she comes to the rescue of the boys, and her people. When events smack her down, she gets back up, stares the threat in the face and doesn’t blink. There is no moment where she sulks in a corner. I like that about her and loved reading about her and want to follow her on this adventure.

In short, “Partials” is a terrific sci-fi, young adult dystopian novel. It reminds me of the re-imagined “Battlestar Galactica”—but for a young audience—meets “Hunger Games”. Not a bad combo. Come to think of it, I might even grab the audio book so I can listen to the story again. And if I venture to listen to the audio book, you know the book has re-readability.

As always, I encourage every reader to visit the author’s website and discover what other works the author has to offer. To visit Dan Well’s official website click here.

Three high school teens in the woods on a Friday night… some beers… skaters with a grudge… what could go wrong? Add in a couple of genetically created … END_OF_DOCUMENT_TOKEN_TO_BE_REPLACED

A dark short story about one man’s oversight concerning his death.  Since dying was just not part of his daily routine, the man just went on with his … END_OF_DOCUMENT_TOKEN_TO_BE_REPLACED