Recently I read a great young adult fantasy novel by Brandon Mull, “A World Without Heroes” Book One in the “Beyonders” series. A wonderful story, a great way to introduce young boys to the fantasy genre before you give them “Lord of the Rings”. Below is my review. 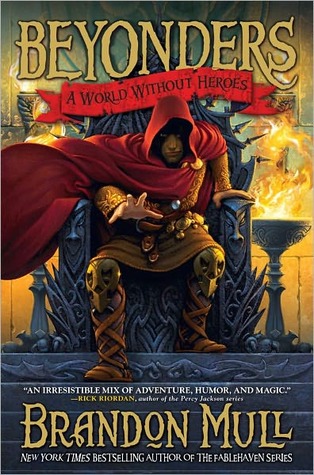 Jason Walker has often wished his life could be a bit less predictable–until a routine day at the zoo ends with Jason suddenly transporting from the hippo tank to a place unlike anything he’s ever seen. In the past, the people of Lyrian welcomed visitors from the Beyond, but attitudes have changed since the wizard emperor Maldor rose to power. The brave resistors who opposed the emperor have been bought off or broken, leaving a realm where fear and suspicion prevail.

In his search for a way home, Jason meets Rachel, who was also mysteriously drawn to Lyrian from our world. With the help of a few scattered rebels, Jason and Rachel become entangled in a quest to piece together the word of power that can destroy the emperor, and learn that their best hope to find a way home will be to save this world without heroes.

“A World Without Heroes” by Brandon Mull is the first book in the author’s series the “Beyonders”. Its rather standard high fantasy fair on the surface, Tolkien meets Lewis if I had to compare. This is by no means a bad thing. Sometimes picking up a good old fashion fantasy story is refreshing. Authors don’t need to reinvented the wheel with every new work they release, though I’m by no means complaining about originality.

So, standard fair… With “A World Without Heroes” there are two kids from our world, Jason and Rachel. They both get sent to an alternate reality called Lyrian and are tasked with destroying the big bad via a prophesy. The world of Lyrian is subjugated, the populous beaten down by the last of the great wizards, a dictator and the current emperor of the land. Today no one dares stand up against this all-powerful guy… except these two Earth kids. The one thing that can defeat this evil wizard/emperor is a Word (it needs to be capitalized because its important and omnipresent, trust me), which has the power to unmake the evil guy. Problem is the Word is in pieces and the kids have to gather allies and friends to help them piece the Word together and avoid the emperor’s agents. It’s standard stuff and for that reason the prose can get a little boring at times. However, I ‘m compelled to say this prophesy is downplayed. Jason and Rachel engage in their heroism because they feel it’ll lead them to a way home, but eventually they begin to care about the friends they’ve made along their journey and decide to forsake their ticket home and risk everything to help win the fight.

What saves the story is Lyrian. Lyrian is a brand new world with interesting species and races, magic, and dangers around every corner. The people that are inhabiting the world are distinguishable, colorful, and memorable. The races and species inhabiting Lyrian are unique as well, different from other fantasy novels. I won’t spoil anything but some of the races have some strange characteristics that may seem silly but on second glance really work.

The characters themselves are likable. Jason and Rachel are lost Earth kids who want to get home but who have the stuff of heroes that propel them into this dangerous quest. All their friends and enemies along the way are individualized and have their own voices and personas, enough to set them apart and be memorable. The one character who I have a hard time writing about is the evil emperor, Maldor. He’s not seen very much. When he is, he’s not a cackling despot. He’s cold and calculating, smart, and four steps ahead of the heroes. Still, he’s not any different than most other villains and so I hope in the sequels to Mull’s “A World Without Heroes” that we find out more about Maldor. If not, Maldor may fade into the background.

Remember, I said on the surface the story is standard fair. This is a hero’s quest. Take the ring, walk to the volcano, drop the ring in and evil perishes. Not so much in Mull’s story. There are enough twists to keep the pages turning, especially in the latter half of the book when things pick up. Jason and Rachel are also not fighters, warriors, soldiers. They’re kids, from Earth, who are not good at sword fighting or horse riding. So they use their minds to outwit the bad guys, which keeps the action engaging.

Overall, a fun read with interesting characters, a rich world, and plot twists enough to keep me turning pages. You can give this book to a teenage boy who wants to transition into reading more fantasy one day and it’ll prime his appetite for more swords and magic. I’ve started reading the sequel and hope the ante is raised.

Remember! Visit the author’s site, check out his other works and give some support. You can visit Mull’s officer website by clicking here.

Three high school teens in the woods on a Friday night… some beers… skaters with a grudge… what could go wrong? Add in a couple of genetically created … END_OF_DOCUMENT_TOKEN_TO_BE_REPLACED

A dark short story about one man’s oversight concerning his death.  Since dying was just not part of his daily routine, the man just went on with his … END_OF_DOCUMENT_TOKEN_TO_BE_REPLACED