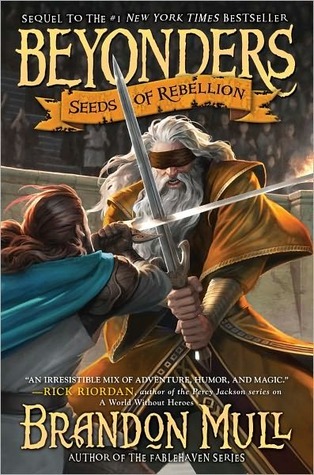 Description of novel from Goodreads:

The second epic installment of Brandon Mull’s #1 New York Times bestselling fantasy series!After the cliffhanger ending of A World Without Heroes, Jason is back in the world he’s always known—yet for all his efforts to get home, he finds himself itching to return to Lyrian. Jason knows that the shocking truth he learned from Maldor is precious information that all of his friends in Lyrian, including Rachel, need if they have any hope of surviving and defeating the evil emperor.

Meanwhile, Rachel and the others have discovered new enemies—as well as new abilities that could turn the tide of the entire quest. And as soon as Jason succeeds in crossing over to Lyrian, he’s in more danger than ever. Once the group reunites, they strive to convince their most-needed ally to join the war and form a rebellion strong enough to triumph over Maldor. At the center of it all, Jason and Rachel realize what roles they’re meant to play—and the answers are as surprising as they are gripping.

In Mull’s “Seeds of Rebellion” readers are returned to Lyrian to find the threat of Maldor—the last and great wizard in this fantasy world, supposedly—stronger than ever. This is the second book in a planned trilogy and the book does feel like it’s the middle installment. There was no closure in the first installment, “A World Without Heroes”, and thus “Seeds of Rebellion” picks up where the last book left off and the plot chugs along, sometimes uphill.

Like in the first book, there is not a ton of character development to “Seeds”. Rachel, teenage girl from our world (called a Beyonder), is given more point-of-view chapters but I don’t feel like I know her any better than I did in book one. She and Jason are much more capable this time around, their allies in Lyrian are offering them training so they can be useful in fights and there is romantic tension between the two characters. Other than that, the only struggle Rachel faces is whether or not she should go home or stay in Lyrian to fight the good fight. This would be interesting if Jason had not wrestled with the same predicament in books one. He’s back in Lyrian after being unceremoniously forced back to our world, his return trip to Lyrian is this time his choice and that is honorable. That’s where is development ends, though.

The supporting characters are interesting and distinguishable. Each one has their own trepidations toward playing the hero in a world where heroes do not stand long against evil. Most of the cast, except for Galloran (aka the Blind King) who deploys selfless courage and no reluctance to sacrifice himself for the greater good, is a reluctant hero. In a way, their reluctance makes the characters believable and relatable. Not everyone is a master swordsman either, which makes the fight scenes believable because the heroes do stumble and make mistakes. Characters like Ferrin also sit in the grey area—until recently he was an agent of evil but now he’s defected to the side of good. Ferrin has his doubts and that keeps readers on edge. Will he betray the group or will he not? Turn the page and see!

There is lots of action, narrow escapes, but also moments for the characters to interact. I don’t mind the lull periods in the story between the action. Lyrian is a beautiful world from Mull’s capable and fun imagination, I like this place. Readers experience the world through what Jason and Rachel see, but we’re also provided backstories and more information from the native characters during the lull periods.  Often children and young adult books are heavy on the action and there is less breathing room, “Seeds” finds a balance. Albeit I will admit that at times the scale does tip to boring, but only slightly, and that didn’t bother me much.

Like “A World, “Seeds” rests on Lyrian to hold the reader’s attention. And Lyrian does a fine job. There are beautiful set pieces and cool creatures. Mull did not settle on relying on a lot of the trappings of the first book, instead building on his foundation. He expanded the lore and geography of Lyrian and that’s what keeps the pages turning, discovering new races and locales. Readers get a more in-depth understanding of the seedmen and their society. The Torivors (talked about and glimpsed at the end of book one, also called lurkers) are dangerous creatures no one wants to mess with. There are zombies too, but Mull did not reinvest the wheel with these guys. He more than makes up for the generic zombies with his twist on giants, a twist I rather enjoyed and thought creative. Many more interesting groups of people wait for the reader to meet. Mull also succeeds in touching on the politics of war and a totalitarian state. “Seeds” is not heavy on the politics but the different factions, their reasons for staying away from the war and isolating themselves, their strategies for dealing with the threat of Malor, are interesting enough.

Look, this is a quest book. “A World” transcended that label to an extent by adding a few twists here and there that can surprise readers. However, “Seeds” settles itself into being a quest story and it feels comfortable to me. Nothing is complex; the evil wizard Maldor needs to be brought down so the world can be at peace, in response a ragtag band of heroes rises up in a bid to take the uber bad down… Hurrah! A prophesy loomed in the background during book one but now guides the way for our heroes because success is not certain and the heroes need direction. Prophesies in fantasies like the Beyonders series are over used and I was hoping the series wouldn’t use it as a crutch to propel the story, too bad but I’m over it. That’s all there is to the story. Get past the simplicity, the prophesy reliance, the linear narrative and you have fun.

Overall, Brandon Mull’s “Seeds of Rebellion” is a fun and delightful read. There is nothing ground braking about the narrative and story but that shouldn’t detract from the enjoyment of Lyrian and its inhabitants. I’ll be picking up the concluding volume in 2013.

Remember! Visit the author’s site, check out his other works and give some support. You can visit Mull’s officer website by clicking here.

Three high school teens in the woods on a Friday night… some beers… skaters with a grudge… what could go wrong? Add in a couple of genetically created … END_OF_DOCUMENT_TOKEN_TO_BE_REPLACED

A dark short story about one man’s oversight concerning his death.  Since dying was just not part of his daily routine, the man just went on with his … END_OF_DOCUMENT_TOKEN_TO_BE_REPLACED