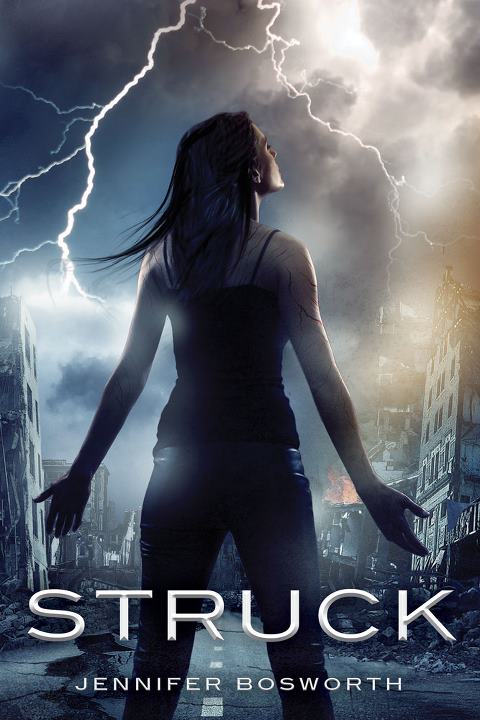 Mia Price is a lightning addict. She’s survived countless strikes, but her craving to connect to the energy in storms endangers her life and the lives of those around her.

Los Angeles, where lightning rarely strikes, is one of the few places Mia feels safe from her addiction. But when an earthquake devastates the city, her haven is transformed into a minefield of chaos and danger. The beaches become massive tent cities. Downtown is a crumbling wasteland, where a traveling party moves to a different empty building each night, the revelers drawn to the destruction by a force they cannot deny. Two warring cults rise to power, and both see Mia as the key to their opposing doomsday prophecies. They believe she has a connection to the freak electrical storm that caused the quake, and to the far more devastating storm that is yet to come.

Mia wants to trust the enigmatic and alluring Jeremy when he promises to protect her, but she fears he isn’t who he claims to be. In the end, the passion and power that brought them together could be their downfall. When the final disaster strikes, Mia must risk unleashing the full horror of her strength to save the people she loves, or lose everything.

Going into “Struck” I was afraid I’d picked up another Twilight copycat. Thankfully, my fears were put to rest early. Jennifer Bosworth’s debut novel is anything but a Twilight knockoff.

The writing is fast-paced. There are tons of twists. The author plants little nuggets, breadcrumbs to hint at the coming twists in the narrative. When the turns come, the reader is hit unexpectedly and then realizes “dang! I should have seen that coming!”. That is fantastic writing and keeps the pages turning. These nuggets help to build the narrative to what is a satisfying and electrifying conclusion with a complete payoff.

“Struck” is your typical dystopian novel. Fans of the Hunger Games novels will not have a problem enjoying this novel. What the novel does differently than a typical dystopian novel is the setting is tweaked. The world’s society has not crumbled, no new power has risen to lead the populous out of the dark days and into a utopian but oppressive totalitarian society. Not yet anyway. California was wrecked by a freak storm and earthquake but the world outside the state remains intact, the county at large isolates the state and declares it a disaster zone beyond help. A very plausible scenario given the real world thinks California is the root of all sin.

Most of the novel takes place in and around Los Angeles, Santa Monica specifically. Bosworth does well to make the earthquake-ravaged city into its own character. Santa Monica lives and breathes, a soul broken and trying to reassemble itself. It easily trusts people. It can be manipulated and used. It weeps. Laughs. Bosworth does this by allowing the reader into the hearts of the refugees that live (read: trying to survive) in the city and also by doing a fantastic job of exploring Santa Monica itself, giving it descriptive details like a character and not a set piece. We smell the decay and despair of the city. It’s congested and filthy, overrun by homeless and the beaten-down. It’s a playground for the heroes and villains, a place they can manipulate, save, or condemn. And I hoped for its salvation the entire time.

Speaking of characters, most of the characters are placed in a grey area. The reader never completely can pin down a character’s motives, which keeps the reader guessing as to what decisions the characters will be making and how they will affect the story. A plus. The one character I never truly believed would be redeemed nor did I empathize with was the villain, Prophet. He is self righteous and evil, especially when speaking about the word of God and condemning Los Angeles and all its inhabitants. He’s the type of villain I like at times, someone I cannot trust even when he seems to be noble.

Before I mentioned I was almost turned off by “Struck” because of its Twilight-likeness. I feel obligated to expand on what prompted that initial thought. As this is a young adult novel there is the typical teenage romance with the overly-used-object-of-affection (you know, the heavenly good looking guy or chick who looks good in skinny jeans–gag me). In “Struck” the name of the overly-used-object-of-affection is Jeremy and he’s mysterious and dangerous and is good looking. I cringed whenever main character Mia swooned over Jeremy, specially since she is a strong female protagonist. But I got over Jeremy-overly-used-object-of-affection. Yeah, Mia is attracted to him but she stands on her own two feet and draws her strength from her character and willingness to sacrifice.

Two things I enjoyed most about “Struck”. The main character Mia (who lightning has struck a dozen times and craves the rush of the next strike but thinks she’s a freak because of her addition) is a strong young woman trying to figure life out but doesn’t go around whining about her situation. She’s trying to keep her family out of trouble, survive the aftereffects of the quake, and avoid the two religious cults that would use her destiny to their own individual advantages. Mia doesn’t allow her destiny to define her and seeks to change what people tell her is set in stone. Cool. The other thing I enjoyed about “Struck” was Mia’s lightning powers. There is something primal and powerful about the element; for someone to attempt to control lightning is insane and reckless but tapping that energy can produce cool affects if/when harnessed and the danger of using the power is always exciting and thrilling. The unpredictability of lightning is fun to read about and it keeps the pages turning. Mia also never seeks the power. She is tempted by the allure but is cautious, which is believable and allows us to connect with her.  Bosworth has a great recipe in “Struck”.

To wrap everything up, Bosworth’s “Struck” is an exciting read with a lot of surprises. Fans of the Hunger Games books or dystopian fiction in general will really get into Bosweoth’s debut novel; look past the cliche romance for something different and fun.

Support the author and visit her official author site by clicking here.

Three high school teens in the woods on a Friday night… some beers… skaters with a grudge… what could go wrong? Add in a couple of genetically created … END_OF_DOCUMENT_TOKEN_TO_BE_REPLACED

A dark short story about one man’s oversight concerning his death.  Since dying was just not part of his daily routine, the man just went on with his … END_OF_DOCUMENT_TOKEN_TO_BE_REPLACED