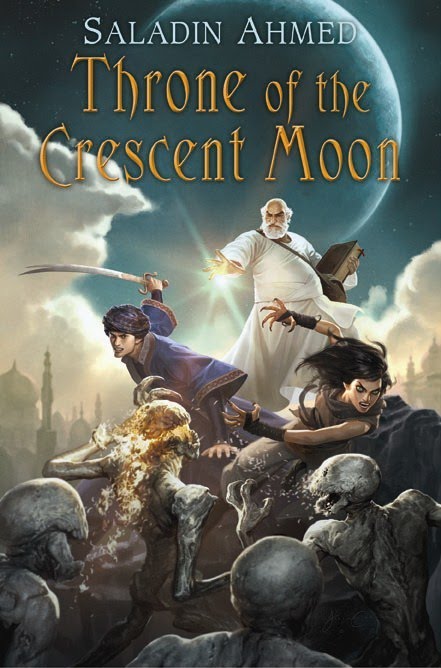 From Saladin Ahmed, finalist for the Nebula and Campbell Awards, comes one of the year’s most anticipated fantasy debuts, THRONE OF THE CRESCENT MOON, a fantasy adventure with all the magic of The Arabian Nights.

The Crescent Moon Kingdoms, land of djenn and ghuls, Khalifs and killers, is on the brink of civil war. To make things worse, a series of brutal supernatural murders strikes at the heart of the Kingdoms. And it’s up to Doctor Adoulla Makhslood to solve them.

“The last real ghul hunter in the great city of Dhamsawaat,” Adoulla just wants a quiet cup of tea. But when an old flame’s family is murdered, he is drawn back to the hunter’s path. Recruiting old companions and new, Adoulla races against time–and struggles against his own misgivings–to discover a plot for the Throne of the Crescent Moon that threatens to turn Dhamsawaat, and the world itself, into a blood-soaked ruin.

Let me start by saying “Throne of the Crescent Moon” is a refreshing entry into the fantasy genre. Instead of a setting that would remind readers of medieval Europe, author Saladin Ahmed has set his tale in a world similar to the medieval Middle East. Imagine Lord of the Rings but set in a land Sinbad might adventure in. There! You have the Kingdoms of the Crescent Moon. This is not a historical fantasy but a true fantasy populated by strange, dangerous creatures called ghuls, holy magic, shadowy villains, dashing rogues, and heroes with extra-ordinary powers. All that gives the author a lot of leeway in his world building but  also allows readers to take the imaginations to a similar setting they might recall from Disney’s “Aladdin” or “1001 Arabian Nights”; by the way, both of those titles are related (click here for a little wiki research).

What is also refreshing are the heroes of the novel. We think wizard and recall Gandalf. Our story’s “wizard” is Adoulla, the last ghul hunter in this magical land who fights evil with holy magic (prayers and such, the system is not horribly detailed in my opinion but works). Adoulla is not typical, which is why I enjoyed him so much. He is fat, old (more “get off my lawn!” old rather than wizened- wise-one old), ready to retire or die, and fed up with heroics. But Adoulla is a man who does the right thing even if he does it grumbling, he loves his sprawling home city of Dhamsawaat for all its dirty back alleys and poor struggling citizens. Adoulla also has a number of allies who are just as colorful. The warrior priest and Adoulla’s assistant, Rassed, who must struggle with maintaining his holy morality among the corruption of the real word. Then there is the bad-ass shapeshifter Zamia, who is the last of her tribe and out for vengeance armed with tooth and silver claws! Another stand out character is the Falcon Prince, a larger-than life thief who is similar to Sinbad in charismatic swagger and dashing sword prowess. No character is without fault or weakness, which brings out much of their personal struggles and allows us to better relate to them. Adoulla for instance struggles with his duties as a ghul hunter and his desire to live a quiet life in his nice townhome, with his books, and the love of his life whom he’s kept at arms length for so long because of the dangers surrounding his life. Author Ahmed did such a wonderful job setting up real people as characters that they simply bring the story that much more to life. I enjoyed their stumbles more than their heroic moments, the latter shines so much more because of the journeys. I won’t go into each character’s story so read the book to meet Raseed, Zamia, the Falcon Prince and MORE!

“Throne of the Crescent Moon” is a whirlwind of fun. The action is wonderfully written and paced, like a dance with effortless movements and spectacle. The world of the Kingdoms of the Crescent Moon is vibrant but also real, from the cracked gems of the rich with their flowing robes and palaces to the common folk peddling their meager wares on the streets. Ahmed has infused the world with a great reliance on religion as well, to the point it’s part of the everyday peoples’ lives, the magic revolves around it, and the powerful use it to cow their lessers. There is something real and unapologetic about the Kingdoms’ religion, its woven so tightly into the society that it has an importance but the story isn’t weighted down by lofty explanations that can become dry.

The one thing I would have liked to see is the djins, or the genies to the mainstream public. They are supposed to be these great evils but Ahmed did not call them to the stage. Oh well, there are two more books in the series and the novel may have felt to crammed. Best to safe some threats for the other two stories.

Overall, “Throne of the Crescent Moon” is something different from a genre that reuses a lot of the same trappings over and over again. I know when I eventually find the guts to write a high fantasy (which I’m wanting to do almost every day I sit down to write) I want to strive for the uniqueness of authors like Saladin Ahmed and Brandon Sanderson (another fine writer with a lot of imagination).

Pick up “Throne of the Crescent Moon” for a surprise experience that will leave a profound impression on your idea of fantasy, an old genre that can always be reinvented with new ideas.

As always, support the authors who graciously share their imaginations and ideas with us. Visit Saladin Ahmed’s official site with a click here.

Three high school teens in the woods on a Friday night… some beers… skaters with a grudge… what could go wrong? Add in a couple of genetically created … END_OF_DOCUMENT_TOKEN_TO_BE_REPLACED

A dark short story about one man’s oversight concerning his death.  Since dying was just not part of his daily routine, the man just went on with his … END_OF_DOCUMENT_TOKEN_TO_BE_REPLACED