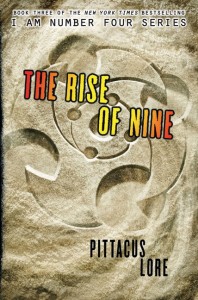 Until the day I met John Smith, Number Four, I’d been on the run alone, hiding and fighting to stay alive.

Together, we are much more powerful. But it could only last so long before we had to separate to find the others. . . .

I went to Spain to find Seven, and I found even more, including a tenth member of the Garde who escaped from Lorien alive. Ella is younger than the rest of us, but just as brave. Now we’re looking for the others–including John.

But so are they.

They caught Number One in Malaysia.
Number Two in England.
And Number Three in Kenya.
They caught me in New York–but I escaped.
I am Number Six.
They want to finish what they started.
But they’ll have to fight us first.

“The Rise of Nine” is the third book in the Lorien Legacies, stories about a group of alien teenagers sent away from their dying planet to eventually train with special powers and come back to avenge their murdered race from the evil Mogs.

All the Lorien kids, known as the Garde, are finally gathering together and getting ready to fight the good fight against an enemy they’ve been long running from. Their mentors are dead. Their friends are captured. There is no one they can trust but themselves and each other.

The one thing I have enjoyed about all the Lorien Legacies novels is the pace. The author(s) do well to keep the action flowing, hard and fast. If there is one thing that Stan Lee can teach us as readers and authors is this: to keep the action and story flowing, get your characters into trouble and don’t let them have too much downtime. That’s not the exact quote but you get the idea. The Lorien Legacies do that, and “The Rise of Nine” is no exception. The Garde are always finding, seeking, or stumbling into trouble.

Two new members of the Garde are added to the cast in this book, though one—Number Nine—appeared at the end of the last book to help out Jon (a.k.a. Number Four). In this book readers get a sense for who these new Garde are. The remaining Lorien Garde are highlighted and their respective personalities are showcased well. The only problem is the lack of character development. None of the previous characters grow. Rather the teenagers are learning to not headbutt each other with their conflicting ideas, objectives, and ultimately their personalities. Everyone is distinguishable and well described if not propelled forward with developing nuances to their individual characters. This is a story driven novel/series, not a character driven one. Not bad but it has less meat.

Speaking of characters lacking development… One of the big gripes I have with the series up to this point is the villains. I don’t really feel like the villains are showcased enough. Sure, the Mogs are scary people with a nasty agenda but they are more a force to be dealt with rather than human. Yes, the Mogs are aliens but even aliens can have agendas for readers to relate to. Without that, the story is one of good versus evil.

The entire narrative is also in first person, but it jumps between four characters. It can be confusing when reading but after a paragraph or two the reader can figure out who’s turn it is to tell the story.

Overall “Rise of Nine” is a fun read if not one with a lot of substance for me to chew on. This is what I call a “popcorn” novel. Still, I would recommend the novel as a good, quick, summer read for anyone looking for adventure, action, and kids kicking the bad guys’ butts!

Three high school teens in the woods on a Friday night… some beers… skaters with a grudge… what could go wrong? Add in a couple of genetically created … END_OF_DOCUMENT_TOKEN_TO_BE_REPLACED

A dark short story about one man’s oversight concerning his death.  Since dying was just not part of his daily routine, the man just went on with his … END_OF_DOCUMENT_TOKEN_TO_BE_REPLACED