What did I do this last Saturday? It’s a long yarn, to say true. My adventure that afternoon ended with me held upside down by a shape shifting female goblin, irritated that I tried to pick up on her (or maybe it was a him, goblins are one type of ugly regardless of gender) in a seedy space port pirate bar. I tried to explain my way out of the awkward situation but the blood was simply rushing to my head so fast I was delirious and making little sense. Eventually s(he) let me down—or rather I was dropped on my head—and allowed to slink away with only my underpants left to me, the other goblins in the bar stripped me of every valuable item on my person.

By now you—the reader—are mumbling expletives and scratching your head.

No, I have not had a psychotic break and sunk into an imaginary fantasy world within my own messed up head. Or have I? I’m a writer. This scenario is entirely possible. Even more so, it’s likely. 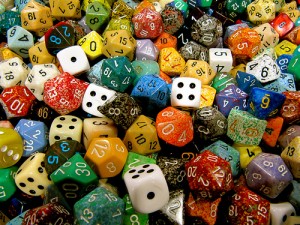 This past Saturday I sat around a table with five other people playing an RPG (role playing game) called “Lady Blackbird: Adventures in the Wild Blue Yonder”. And yes, the game has a Star Wars / Firefly vibe. There is an imperially dominated galaxy, starships, a bossy princess, narrow escapes, magic, goblins, et cetera. Good stuff. The group laughed. We cried. It was hot as all get out on Saturday in our California neck of the woods but none of us cared a lick.

This is the second game I’ve played with my friend and several other people. I’ve always wanted to get involved in tabletop gaming but never had the opportunity nor the friends interested in playing. Suffice to say, I was missing out on a great experience as a geek and an author.

If you don’t know anything about tabletop RPGs I will break down the concept simple and quick-like. Most of the games come with predetermined settings, adventures, character classes, rules, and sometimes characters. A GM/DM (grand master or dungeon master) moderates, narrates, and controls the overall flow of the adventure. Aside from the GM there are the players who take on specific roles for the adventure. Each person has a unique identity, backstory, abilities, strengths, and weaknesses. As the game progresses, the players interact with each other and the GM, describing their actions, the setting, making choices, succeeding, failing, and living as their characters in this fantastic world.

That there is tabletop role-playing in a nutshell. If you’re still confused I have two words left to help your brain kick-start… Dungeons & Dragons.

As an author I came to a distinct revelation this last Saturday. Participating in an RPG, gaming this way, is storytelling.  It’s communal storytelling, or rather like co-authoring a story with several other authors. Nonetheless, tabletop gaming is storytelling.

Think about this for a minute. My intro paragraph up above started like a wacky introduction to a science fiction fantasy hybrid, the way a chapter might begin to grab a reader’s attention. The scene with the goblins and the bar was acted out, told by myself, the GM, and another player who came in later to gather all my belongings from the irritated, offended goblin wo(men). The scene got a lot of laughs. I looked silly for getting my hands caught in the cookie jar (or rather the goblin’s pockets) but everyone loved the antics.

Playing in a game like this is good practice for storytelling. It exercises the creative juices in an author’s head, forces the imagination to flex. The imagination is a muscle. We need to use it in order for it to grow stronger.

One thing I find interesting about the game is the lack of control a player has over the entire situation. There are so many personalities at work with the different players taking on separate and unique personas. No one can control how another person will make decisions and act, which can and will throw the entire story out of whack and get a group into trouble. You role (no pun intended) with the punches and react. Trouble is part of keeping a good story going. Each event in the game can end differently, lead to an altered path because of the players making the decisions, who likely make different decisions than a different group might make. The experience is kinetic. That is how a novel works too, or how a novel should work. You create a world, a threat to fight, and finally you toss in a bunch of diverse characters who have their foibles and no business socializing with each other and who under normal circumstances would kill each other if left in the same room. Along the way the characters fight each other. They disagree. One may betray the group. A couple may learn to love each other. Some will develop grudging respect for each other. That makes for a rich story with deep, three-dimensional characters. Same goes for the most successful high fantasy properties, such as Song of Ice and Fire, Wheel of Time, Star Wars.

The game progresses similar to a novel as well. There are moments of action where the skills and talents of a player’s character are showcased. Other moments players experience downtime where the characters interact socially with each other, learn about one and other, develop relationships. How a player’s character acts in these situation depends on his or her background, the fleshing out of that character, the details that make that character come alive.

I encourage authors (especially fantasy or science fiction authors) who have not dived into gaming to give the experience a shot. It forces an author to focus on bring to life a single character and interacting with other player characters who can and will come into conflict with their player’s persona. A good GM (my friend is a good one) will make the action scenes challenging, forcing the player character to think around problems. Authors can learn from those experiences. Challenging characters is what makes for good storytelling. There is nothing worse than a petty thief who strolls into a goblin bar thinking he can successfully pickpocket shape-shifting goblins, and succeeds. That outcome is boring. Realistically, sometimes the scenario doesn’t work out well. Sometimes that petty thief is upended, his pockets turned out, and his shiny possessions (of which he wanted to add more to) spilled out on to the floor! “Oh no! Not my shiny things!” That is good, fun writing. And it’s a fun time. Roll the die and see how successful your adventure, your story can be.

Three high school teens in the woods on a Friday night… some beers… skaters with a grudge… what could go wrong? Add in a couple of genetically created … END_OF_DOCUMENT_TOKEN_TO_BE_REPLACED

A dark short story about one man’s oversight concerning his death.  Since dying was just not part of his daily routine, the man just went on with his … END_OF_DOCUMENT_TOKEN_TO_BE_REPLACED