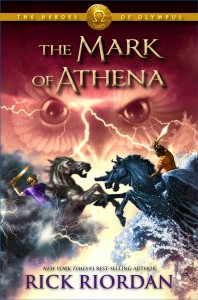 In The Son of Neptune, Percy, Hazel, and Frank met in Camp Jupiter, the Roman equivalent of Camp Halfblood, and traveled to the land beyond the gods to complete a dangerous quest. The third book in the Heroes of Olympus series will unite them with Jason, Piper, and Leo. But they number only six–who will complete the Prophecy of Seven?
The Greek and Roman demigods will have to cooperate in order to defeat the giants released by the Earth Mother, Gaea. Then they will have to sail together to the ancient land to find the Doors of Death. What exactly are the Doors of Death? Much of the prophecy remains a mystery. . . .
With old friends and new friends joining forces, a marvelous ship, fearsome foes, and an exotic setting, The Mark of Athena promises to be another unforgettable adventure by master storyteller Rick Riordan.

Percy Jackson returns with a handful of his demigod friends to watch his back, the action is ramped up and the teenage angst is here. Riordan only stumbles a step or two with this next installment in the Heroes of Olympus series but ultimately this is a fun read with only minor disappointments.Every Riordan book—at least those in the Percy Jackson universe—is about road trips and the self-discovery on that eye-opening journey. Just add in a Greek or Roman monster and the meddling of gods and you have the road trip from hell, which is typical in the Percy Jackson universe. In “Mark of Athena” there is no car and the demigods are not spending a lot of time scrambling around looking for transportation. Leo the mechanic-wonder has built a flying ship called the Argo II that will take him and his friends to Rome. Malfunctions, sabotage, and the need for repairs easily keep things interesting.Not all the seven demigods in the main cast get big roles of self-discovery. There is not enough room and there are other books. I think Riordan misses a step when attempting to balance all the characters he’s brought together. He’s used to having three demigods on a quest and (since the start of this second series) three narrators looking inwardly at who they are and trying to overcome their individual struggles—what else is a road trip with monsters and gods for, huh? There are four narrators here—Percy, Annabeth, Leo, and Piper. Some of these heroes are interesting. Leo is jaunty and has a lot of humor that comes across in his chapters, he gets along better with machines and feels like a third wheel with all the couples on the flying ship. Percy is struggling with how to be s leader amongst all these superstar demigods and he trying to manage the anger he’s feeling at always being a pawn for the gods, he’s tired of these adventures and wants to shove a thumb in a god’s eye. Annabeth is struggling with living up to her godly mother’s expectations. She wants to be perfect but fears failing Athena, Percy, and her friends. Piper is just whiny and constantly worried about losing Jason; her chapters were less fun to read. We don’t get much development from Jason, Hazel, or Frank. Too bad.

Give me more Leo and Annabeth. We’ve never heard much from Annabeth before now and Leo is entertaining. I really missed Frank and Hazel, who both have interesting storylines and problems still not revolved. Otherwise, all the characters are as fun as ever, old friends I enjoyed hanging out with again. No one solves their problems with muscles or swords, which is a hallmark Riordan continues to put in his stories. The author is good at finding inventive ways for his heroes to untangle themselves from trouble.

Where I think the book suffers most is from middle-book syndrome. Here Percy and the gang are attempting to head to Rome to face off with Gaea. While the previous books had a ton of mystery behind various aspects of the plot and the coming threats, the reader is told up front what the teens will face and who and why. The heroes are led by their noses and the reader is too. That does not diminish the fun of the story. The adventure is there, but there are less moments where you’re gasping at an unexpected reveal. Not that the gut wrenching finale is not good. It is! That’s what saves the story and pushes through. I have to say this: Riordan had courage when writing the end of “Mark of Athena”, an ending that is difficult to speak of without ruining. So you get spoiler warning… To read click show

Riordan backed Annabeth and Percy into a corner and literally dropped them into Tartarus. He didn’t flinch. They retrieved the sacred artifact that may mend the rift between New Rome and Camp Half Blood, uniting the camps for the final battle against Gaea, but the two heroes were lost. Good for you, Mr. Riordan. Just as these two lovable characters were reunited after Percy’s amnesia in “Son of Poseidon”, he and Annabeth are dropped into hell. Together mind you, it’s sweet and tragic. People who love these characters will scream. I think fans already have. But I realize Percy and Annabeth have to head down to Tartarus, the ultimate quest depends on having someone on the other side of the Doors of Death at the important hour so they can be closed for good from both sides. That’s why this is a middle-book. Riordan is setting up his players for the final battle.

As the story moves to the Mediterranean, the adventure picks up and novel kicks into high gear, running to the finale mentioned in the spoilers. By the ending there is so much momentum leading into the next book that I cannot help but be excited.

Check out other books from the Percy Jackson universe and Rick Riordan’s other works by visiting his official website (click here).

Three high school teens in the woods on a Friday night… some beers… skaters with a grudge… what could go wrong? Add in a couple of genetically created … END_OF_DOCUMENT_TOKEN_TO_BE_REPLACED

A dark short story about one man’s oversight concerning his death.  Since dying was just not part of his daily routine, the man just went on with his … END_OF_DOCUMENT_TOKEN_TO_BE_REPLACED