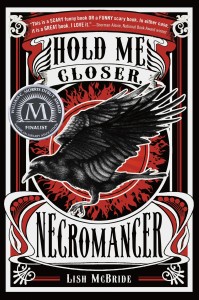 Sam leads a pretty normal life. He may not have the most exciting job in the world, but he’s doing all right—until a fast food prank brings him to the attention of Douglas, a creepy guy with an intense violent streak.

Turns out Douglas is a necromancer who raises the dead for cash and sees potential in Sam. Then Sam discovers he’s a necromancer too, but with strangely latent powers. And his worst nightmare wants to join forces . . . or else.

With only a week to figure things out, Sam needs all the help he can get. Luckily he lives in Seattle, which has nearly as many paranormal types as it does coffee places. But even with newfound friends, will Sam be able to save his skin?

Sometimes the books we read get bogged down in a message, or rather, busy preaching some issue. It’s like being hit over the head. Authors forget that readers plunge into a fantasy word to escape… to have fun. Young adult fiction is good at telling a story, nothing more. Fun is what McBride did with “Hold me Closer Necromancer”. This book was a fun ride full of cheeky laughs, cooky characters, sassy talking heads, skater punks, and zombies. Think Buffy the Vampire Slayer meets the Dresden Files. McBride’s novel is popcorn and I love throwing back the corn and enjoying the entertainment.

The story is simple enough. After a life of feeling disconnected with the world–out of place–a Seattle  fry cook named Sam learns he is mayor of zombieville, or rather he’s an intermediary closely tide to life itself. He can speak to spirits and raise the dead. Quickly Sam has to master his new found powers so he can protect himself from threats that want to control him or kill him. And those threats will stop at nothing to control him, even hurt those closest to him.

Sounds serious? Yeah, but not really. Sam is quick with the quips, even when the danger is high. He’s a tough guy with a soft side, making him as likable as a puppy with playful spunk but with enough brains to know he’s out classed and needs to ask for help. You can respect Sam as a hero, a leader who inspires loyalty in his friends. He’ll even let the girls jump in to save his rear end. Another positive aspect of this novel, the female leads are strong and take no lip. Hybrid were Brid is lovable but don’t cross her because she has teeth and claws and is comfortable in her own skin (even when that’s all she has on). There are also spirit guides to offer assistance to Sam, though not without adding a little sarcastic spice. Oh! Did I mention the sassy talking head who barks orders and is carried around in a bowling bag with a skull on the front? That is cool and fun. Megalomaniac necromancer Douglas is cool as a cucumber and slick as an eel, which is frightening because he seems to have everything in hand and willing to let heads roll to make his point. The man is scarier than a bond villain, except he doesn’t stop to glut over his carefully designed plan, which keeps the suspense high.

The magic is not very original but that is something McBride might have done to keep the action flowing. She doesn’t have to stop and explain a new system. Readers of urban fantasy are familiar with the power of names, blood offerings, and circles of power. How she deals with necromancy is unique. It is not about the dead. Sam and Douglas are connected with life itself, they can read a person’s emotions and know their characters and soul as much as bring forth the dead and commune with spirits. Many fear them because of their immense control over life, not death.

One complaint I have is the narrative itself. McBride choose to write Sam in the first-person and give the reader a more personal view into Sam’s world. Fine. Coo. However, when she switches to someone else’s point of view she also switches to the third-person. This change is like a stutter step and does hinder the flow of the novel… for me, personally. Other than this little bad shifting, the novel is fun (did I mention that already?).

Are you a fan of Joss Whedon’s Buffy and Angel? Did you enjoy Reaper’s short run on the CW? Maybe you dig Jim Butcher’s the Dresden File? If so, pick up Lith McBrode’s “Hold Me Closer Necromancer”. It’s snappy snarky horror that is more funny than scary, which is a fun (there it is again) experience.

Support the author, visit her official site by clicking here.

Three high school teens in the woods on a Friday night… some beers… skaters with a grudge… what could go wrong? Add in a couple of genetically created … END_OF_DOCUMENT_TOKEN_TO_BE_REPLACED

A dark short story about one man’s oversight concerning his death.  Since dying was just not part of his daily routine, the man just went on with his … END_OF_DOCUMENT_TOKEN_TO_BE_REPLACED