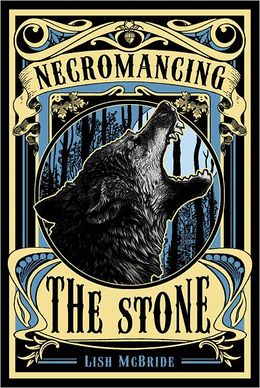 With the defeat of the evil Douglas behind him, Sam LaCroix is getting used to his new life. Okay, so he hadn’t exactly planned on being a powerful necromancer with a seat on the local magical council and a capricious werewolf sort-of-girlfriend, but things are going fine, right?

Well . . . not really. He’s pretty tired of getting beat up by everyone and their mother, for one thing, and he can’t help but feel that his new house hates him. His best friend is a werebear, someone is threatening his sister, and while Sam realizes that he himself has a lot of power at his fingertips, he’s not exactly sure how to use it. Which, he has to admit, is a bit disconcerting.

But when everything starts falling apart, he decides it’s time to step up and take control. His attempts to do so just bring up more questions, though, the most important of which is more than a little alarming: Is Douglas really dead?

If “Hold Me Closer Necromancer” was about Sam’s discovery of a hidden world underneath Seattle’s urban bustle, constant rain, and street corner army of coffee shops than “Necromancy the Stone” is the next step in Sam’s journey. That’s why the novel works well as a sequel, Lish McBride succeeds in expanding Sam’s universe and giving fans something more. Sequels should give more and “Necromancy the Stone” is one of those successful sequels.

“Necromancy the Stone” is the next step in Sam’s journey. In the first novel he felt like an outsider on the fringes of what most teenager and young adults think of as “normal”. He skated through life (literally and figuratively), fliping burgers for a living, had no aim, no road to travel. Yet Sam sought purpose and stumbled into a life he never knew existed. He found out he was extraordinary. Sam can call up, command, and communicate with the dead! There’s an entire world of things-that-go-pump-in-the-night right beneath Seattle and he’s part of that world. His indoctrination was painful and terrifying but he came out ahead with great power and a lot of irresponsibility. Sam is the Spider-man of the dead.

That’s where “Necromancy the Stone” begins. Sam has walked onto this new road and he needs to learn to walk that path without tripping or stubbing his toe. But life is not simple, not even for our friendly neighborhood former burger-flipper turned necromancer. “Necromancy the Stone” is about Sam weeding through this new world, discovering more about his powers, all the while creating alliances and discovering who his enemies (new and old) are. It’s about Sam finding his confidence. It’s one thing to know who you are, another matter is having the confidence to be that person, on your own terms. All this is difficult when a necromancer like Sam is feared by many and trusted by few.

Sam is not alone, though. Once more he has a loyal cadre of friends, new and old. From werebears to barbarian gnomes and ghostly secretaries, Sam has many helping hands with unique personalities. Mix all these crazy characters together and the novel retains the humor McBride brought to the first novel. The only flaw in the books is that these characters are more in the background, the author only briefly explores the relationships Sam has with his friends and family. I wanted to learn more about the timid yet resourceful Frank, Sam’s sister Hailey (I think there’s more to her than what McBride has shown us), and more about Ashley the Harbinger’s past before her spectral vocation. Nonetheless, the characters are still lovable and they liven up the story that centers so much on Sam’s growth.

Speaking of gripes, my problem with the first novel is somewhat taken care of with the sequel. The constant shifting of points of view from character to character (away from Sam, from first person to third) is toned down and the narrative flows better. The only exceptions are detours to Brid’s story—she’s going through her own growing pains, which if I spoke about here it would spoil the story, suffice to say the half- were half- fairy is made even more badass—and glimpses at the antagonist. Sam’s main antagonist in “Necromancy the Stone” is better fleshed out. I didn’t feel more sympathy towards this person but by the end of the novel I understood him/her better than I did Douglas (who was a simple power hungry egomaniac).

Overall, a fun adventure. Sam’s new world is explored. McBride expands the cast of characters, introducing new creatures and species, and digs deep into werewolf politics. All these things really beef up the series and take it up a notch… again, this is essential for sequels. I really like how Sam finds non-aggressive ways to solve his problems. Solutions do not come down to blows but matters of the heart. Our intrepid former fry cook turned necromancer is a gentle soul who doesn’t comprise who he is for what he is. Ultimately, McBride made the story about a young man coming to terms with his life but on his own terms, that strengthens character and Sam has plenty in spade. Pre-order me the third-installment with all its glorious skater necromancers, were-whatevers, fighting gnomes, bigfoots, witches, and surly-homeless satyrs.

As always, I encourage people to show love to the authors. Visit Lish McBride’s official website by clicking here.

Three high school teens in the woods on a Friday night… some beers… skaters with a grudge… what could go wrong? Add in a couple of genetically created … END_OF_DOCUMENT_TOKEN_TO_BE_REPLACED

A dark short story about one man’s oversight concerning his death.  Since dying was just not part of his daily routine, the man just went on with his … END_OF_DOCUMENT_TOKEN_TO_BE_REPLACED