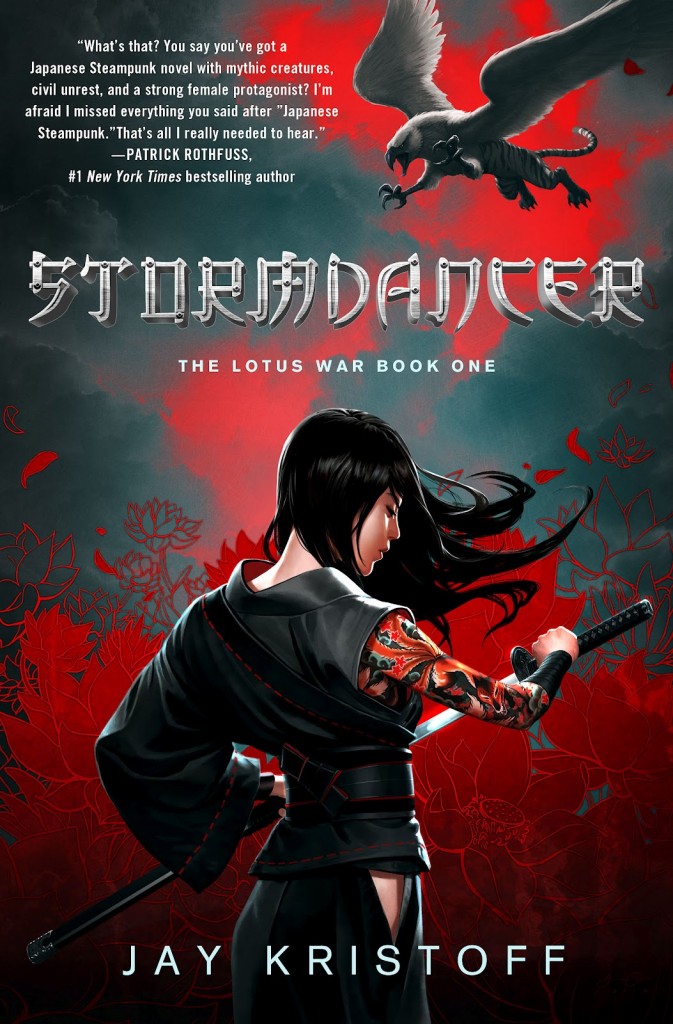 Griffins are supposed to be extinct. So when Yukiko and her warrior father Masaru are sent to capture one for the Shogun, they fear that their lives are over. Everyone knows what happens to those who fail him, no matter how hopeless the task.

But the mission proves far less impossible, and far more deadly, than anyone expects – and soon Yukiko finds herself stranded: a young woman alone in her country’s last wilderness, with only a furious, crippled griffin for company. But trapped together in the forest, Yukiko and Buruu soon discover a friendship that neither of them expected.

Meanwhile, the country around them verges on the brink of collapse. A toxic fuel is slowly choking the land; the omnipotent, machine-powered Lotus Guild is publicly burning those they deem Impure; and the Shogun cares about nothing but his own dominion. Yukiko has always been uneasy in the shadow of power, when she learns the awful truth of what the Shogun has done, both to her country and to her own family she’s determined to do something about it.

Returning to the city, Yukiko and Buruu plan to make the Shogun pay for his crimes – but what can one girl and a flightless griffin do against the might of an empire?

Let’s face it, avid fantasy fans. Tolkien is the godfather of fantasy and most authors end up writing their first bad manuscript reefing on his elves, orcs, and dwarves. Lord of the Rings is the granddaddy of fantasy novels two generations of readers. We love the Rings and want to emulate the magic we feel coursing through us when reading about Frodo and Sam braving their way to Mount Doom to defeat Sauron by destroying the Ring in the heart of the volcano. Good stuff. I maintain that some of the best authors today—Sanderson, Rothfuss, Jemisin, Ahmed—completely turn away from this European folklore and forge something completely new, sometimes using myths and legends from other continents  to create these exciting original worlds. I am happy to put Jay Kristoff in this category for his completely, fresh, exciting debut novel “Stormdancer”.

Two words is all you need to describe the first in Kristoff’s Lotus War series… Japanese steampunk. That alone should get people salivating, their eyes bugging out, their feet wanting to rush them to the bookstore to pick this book up. Come on now! Admit you’re intrigued.  Steampunk is big right now like dystopian science fiction and bow and arrow wielding teenage heroines are. And the world of Shima in Kristoff’s novel is alive with clockwork samurai, airships, and mechanized chainsaw katana. You can hear the gears grinding, the grating growl of the chainsaw blade, and husky Darth Vader rasp of respirators from towering bushido warriors in great big iron suits. Oh, of course there are goggles too.

“Stormdancer” is more than this, though. It was not the steampunk aspect that drew me to read the book but that Kristoff used Japanese myth to conceive this interesting world. Kristoff did a wonderful job of infusing the story and world with a culture that is recognizable as the far east. From the honorable samurai, the secretive ninja rebels, the clans systems, to the oni, the pantheon of gods, and the thunder tigers, the world is exotic and a fresh new adventure for high fantasy readers.

The pace of the story is kinetic as well, a razor sharp as any katana’s edge.  Action scenes are easy to follow and not busy with a lot of details that easily bog down most fantasy novels.  Political intrigued also keeps tensions high. A spoiled young shogan with too much misplaced ambition  a enterprising guild of mechanics and priests who wish to pull puppet strings, and a shadowy organization that wants revolution for a world polluted by the one thing Shima’s economy is dependent on.

What I loved most about “Stormdancer” is its heart. Main character Yukiko knows her world is being corrupted by the greedy corporate/religious organization and strangled by the childish whims of a bored ruler, but honor and duty to her world and her clan’s ruler keeps her from acting. It is when she meets and eventually befriends the wild and free thunder tiger–a griffin she later names Buruu–that she begins to question the concept of honor. Yukiko must learn about sacrifice and forgiveness if she is to forge a path. Her heartfelt connection to Buruu is wonderful and hard earned. Buruu too, a wild creature who rages like a storm at the humans who have corrupted and polluted his world with greed and war, has a lot to learn. Both characters learn much from each other, they grow together, and begin to see the world through each other’s eyes (literally).

A fantastic and energetic debut.  What else can I say? Samurai. Ninja. Steampunk. Thunder tigers with attitude! Fans of “Avatar: The Last Airbender” will enjoy “Stormdancer” and I encourage epic fantasy fans to dig into something unique and different from the usual epic fantasy.

Show some love to Jay Kristoff by visting his site, his musings are hilarious and fun. Click here to head to his official site.

Three high school teens in the woods on a Friday night… some beers… skaters with a grudge… what could go wrong? Add in a couple of genetically created … END_OF_DOCUMENT_TOKEN_TO_BE_REPLACED

A dark short story about one man’s oversight concerning his death.  Since dying was just not part of his daily routine, the man just went on with his … END_OF_DOCUMENT_TOKEN_TO_BE_REPLACED