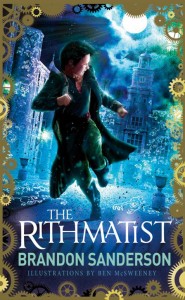 More than anything, Joel wants to be a Rithmatist. Chosen by the Master in a mysterious inception ceremony, Rithmatists have the power to infuse life into two-dimensional figures known as Chalklings. Rithmatists are humanity’s only defense against the Wild Chalklings — merciless creatures that leave mangled corpses in their wake. Having nearly overrun the territory of Nebrask, the Wild Chalklings now threaten all of the American Isles.

As the son of a lowly chalkmaker at Armedius Academy, Joel can only watch as Rithmatist students study the magical art that he would do anything to practice. Then students start disappearing — kidnapped from their rooms at night, leaving trails of blood. Assigned to help the professor who is investigating the crimes, Joel and his friend Melody find themselves on the trail of an unexpected discovery — one that will change Rithmatics — and their world — forever.

Items of power are common in fantasy. The magic sword. The wizard’s wand or staff. An invisibility cloak. Boots of swiftness. A piece of chalk…

Yup. Chalk. A mundane item, yes. But not in the hands of Brandon Sanderson. In Sanderson’s “The Rithmatist” a piece of chalk is a powerful object. Sanderson brings excitement to straight lines, makes flat chalk drawings called chalkings viable threats. When two rithmatists—the wizards of this world—duel, drawing circles of warding, bringing to life  two-dimensional chalk knights and other creatures to break down defenses and attack, the reader is thrilled and feels the eminent danger the characters are facing.

Sanderson is known for his magic systems so it is not surprising his rithmatics system is imaginative, original, and just plain fun. He is also a master of the epic fantasy, the big plots, and expansive worldbuilding. While characters are interacting with each other, fleshing out their individual stories and revealing personalities big things are stirring. Read the summary above, students at this prestigious academy are going missing. Foul play is afoot, which is made all the more sinister by a shadowy bowler hat wearing villain and strange new rithmatic lines. Always there are hints at a bigger world, unseen threats, a greater evil no one is prepared to face or willing to face. The Harry Potter books had this; Voldemort was always in the shadows with big plans, readers could sense the growing threat that was bigger than the small little mysteries and troubles Harry and his friends were always combating. “The Rithmatist” has this same tone.

The world too is detailed and fleshed out, but never does Sanderson bog down the story with weighty exposition. The characters talk about the Americas as fractured islands. South America is a major power and a great influence on culture, as is the dominant power that is an Asian dynasty. Sanderson also uses the magic system to comment on the social order of the world, a common mechanism in his story telling. All of this never interrupts the story’s flow.

I almost forgot to mention this is a gearpunk novel. Mechanized crabs trim lawns and the mass transit system is a skyway run with tightly wound springs and complex gear systems. Again, this is all background and none of it gets in the way of the story or the characters.

Like Rowling, Sanderson has created great characters who are defined by not their strengths but their weaknesses. Joel can draw the perfect line and knows all the rithmatic defenses better than any of his classmates, only problem is Joel cannot bring life to his lines. He is smart, dedicated, and will make sacrifices to do what is right for others (even putting himself in danger for his friends). That doesn’t mean he cannot be arrogant and a showoff. There are times when Joel becomes a bully, beating down on people who have ignored or scorned him because of his passion for rithmatics when he can never be a rithmatist. It is his struggle to find his place between the world of the normal students and the rithmatic students that makes Joel likable. We all want to belong and practice our passion.

Then there is Melody, a rithmatist who hates her preferred status for the pressures it placed on her, she also cannot draw a straight and feels inadequate. But she can bust out a devastating unicorn like no one’s business! She’s also cheeky and is redheaded fireplug with a big personality, often speaking before thinking and who has some of the best lines in the novel. At one point she comments to Joel, “What good are friends if they don’t put you into mortal peril once in a while?”

Ultimately, the novel is about looking past your weaknesses, finding what makes you special, and relying on the people who care about you most because they’ll be there in a pinch. Together with Joel’s perfect lines and rithmatic strategic mind and Melody’s talent for drawing chalkings they are a force to be reckoned with. Luck, pluck, and decency allow the friends to win the day. Joel and Melody’s often antagonistic relationship, their back and forth razing also makes for some hair raising adventures that are fun and that will make you stay up all night finishing the book.

“The Rithmatist” relies on familiar YA troupes, as many reviewers have pointed out. Teenagers rush in to save the day, empowered by youth and innocence, when the problems become too much for the high-minded adults. Friendship and intolerance are key plot drivers. There is the suspicious professor Joel immediately suspects as a villain. A budding romance is hinted at too, along with an ubber threat yet seen. Yet these troupes do not bother me. Yes, these themes are expected but Sanderson’s inventive magic system and his fresh world building put a new spin on the familiar YA tale.

Overall, “The Rithmatist” is a great read. Like Harry Potter, Star Wars, “The Goonies” and a long list of other titles, the novel brings out the child in the reader.  When closing the book I was deeply satisfied and smiling because I found a great adventure in the story. That’s what’s important and those feelings stay with the reader. If you enjoy Harry Potter, pick up “The Rithmatist”, the first novel in what is obviously a new series by Brandon Sanderson.

Support the author by taking a trip to his official website (click here). Sanderson is a wonderful author who loves his fans. He offers extra content, lectures on the writing craft, and a lot of other cool content. Check him out!

Three high school teens in the woods on a Friday night… some beers… skaters with a grudge… what could go wrong? Add in a couple of genetically created … END_OF_DOCUMENT_TOKEN_TO_BE_REPLACED

A dark short story about one man’s oversight concerning his death.  Since dying was just not part of his daily routine, the man just went on with his … END_OF_DOCUMENT_TOKEN_TO_BE_REPLACED