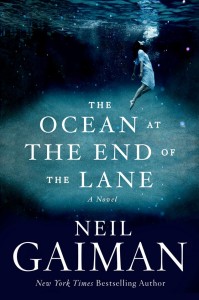 Sussex, England. A middle-aged man returns to his childhood home to attend a funeral. Although the house he lived in is long gone, he is drawn to the farm at the end of the road, where, when he was seven, he encountered a most remarkable girl, Lettie Hempstock, and her mother and grandmother. He hasn’t thought of Lettie in decades, and yet as he sits by the pond (a pond that she’d claimed was an ocean) behind the ramshackle old farmhouse, the unremembered past comes flooding back. And it is a past too strange, too frightening, too dangerous to have happened to anyone, let alone a small boy.

Forty years earlier, a man committed suicide in a stolen car at this farm at the end of the road. Like a fuse on a firework, his death lit a touchpaper and resonated in unimaginable ways. The darkness was unleashed, something scary and thoroughly incomprehensible to a little boy. And Lettie—magical, comforting, wise beyond her years—promised to protect him, no matter what.

Childhood, growing up, is a magical and terrifying experience. And no one captures the childhood experience better than Neil Gaiman, and again he does  a wonderful job in “The Ocean at the End of the Lane”. His prose are lyrical and magical in and of themselves, matched only by Patrick Rothfuss’s work, but it’s the journey Gaiman takes us on that is the heart of the novel.

In “The Ocean at the End of the Lane”, Gaiman captures exactly what it’s like as an adult looking back to the memories of childhood. Often adults forget what it was like during those tender years. The narrator in the novel comes back to his family’s former home in the country after a long absence and finds himself visiting a neighbor down the road, specifically the pond at the back of the old, homey farmhouse. Memories flood his mind. Memories he’s not been able to recall in years, always just at the edge of his consciousness. Memories of his seven year old self and of his neighbor Lettie Hempstock.

Gaiman takes the reader through one summer in the narrator’s wonder years. He introduces us to a boy who doesn’t feel he fits in. He’s lonely. He finds comfort in books, solitude; though the boy would like a friend. The world is scary. The everyday world the boy lives in is run by adults, big people who tower of the boy and most children. It’s a world so large a child cannot hope to understand. But in the boy’s books, children’s tales of adventures, adventures where adults cannot solve the mysteries or catch the villain, only a young protagonist has the wits and imagination to get the job done. Readers are reminded of their own childhood through the narrator, they can easily relate to his growing pains, they remember how they escaped their troubles and the big adult world. Gaiman is a sorcerer, he knows the spells children use to find fantasy lands in the backyard, the pixies in the garden.

The narrator’s neighbor Lettie helps him find a magical world. She is earnest and wise at the seeming age of ten, the narrator instantly believes in what Lettie says, what she promises. When she tells the narrator that the pond in the back of her house is an ocean, we believe her. The readers do too. We fall in love with Lettie as she leads the narrator on a journey to another world and promises to protect him no matter what happens. Lettie, her mother, and her grandmother represent an ancient world filled with strange magics, old gods, and heroes who slay foes.

“The Ocean at the End of the Lane” echoes much of Gaiman’s past work, especially “Coraline” and “American Gods”. “Coraline” for the antagonist, the frightening Nanny with all her rules and demonic plotting to twist the world to her vision. “American Gods” for the Hempstock women, who–again–recall the ancient magics from the old world.

Gaiman has crafted a wonderful fable for all ages, though it’s billed as an adult novel. He reminds us of the magic in childhood as well as how bittersweet those years can be, filled with play as much as loss. Those dark moments–as when the narrator is almost drowned in a bathtub or when he and Lettie venture to put a stop to a demon trying to wiggle through a hole in Forever–are the most white-knuckle moments that will keep readers on the edge of their seats.

Do I need to tell people to give some love to Gaiman and venture over to his site? Probably not. I doubt there are few people who haven’t already read “The Ocean at the End of the Lane”. Regardless, click here to visit Gaiman’s site. Like his latest novel, Gaiman is charming and witty.

Three high school teens in the woods on a Friday night… some beers… skaters with a grudge… what could go wrong? Add in a couple of genetically created … END_OF_DOCUMENT_TOKEN_TO_BE_REPLACED

A dark short story about one man’s oversight concerning his death.  Since dying was just not part of his daily routine, the man just went on with his … END_OF_DOCUMENT_TOKEN_TO_BE_REPLACED