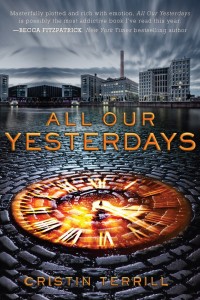 “You have to kill him.” Imprisoned in the heart of a secret military base, Em has nothing except the voice of the boy in the cell next door and the list of instructions she finds taped inside the drain.

Only Em can complete the final instruction. She’s tried everything to prevent the creation of a time machine that will tear the world apart. She holds the proof: a list she has never seen before, written in her own hand. Each failed attempt in the past has led her to the same terrible present—imprisoned and tortured by a sadistic man called the doctor while war rages outside.

Marina has loved her best friend James since the day he moved next door when they were children. A gorgeous, introverted science prodigy from one of America’s most famous families, James finally seems to be seeing Marina in a new way, too. But on one disastrous night, James’s life crumbles apart, and with it, Marina’s hopes for their future. Now someone is trying to kill him. Marina will protect James, no matter what. Even if it means opening her eyes to a truth so terrible that she may not survive it. At least not as the girl she once was.

All Our Yesterdays is a wrenching, brilliantly plotted story of fierce love, unthinkable sacrifice, and the infinite implications of our every choice.

Some might shrug and say “All Our Yesterdays” is a YA romance with time travel. I believe author Cristin Terrill created a wonderful time travel sci-fi adventure with great drama, thrills, with a dash of realistic romance. This is more than a romance novel. Her debut is about our perceptions of good versus evil, the level of commitment we hold on to when trying to achieve what we perceive is the greater good no matter if it means tears and blood, and how love  and friendship last through time and can save us from ourselves. Bottom line, “All Our Yesterdays” is a fun read and is about the characters. It is not silly. No one sparkles. And actions have consequences.

One of the best aspects of the novel is the narrative. The story is told in the first-person with two POVs. The twist, and the most interesting part, is that the POVs are from the same character. Kind of. The character(s) are Marina and Em, the same girl, one at age sixteen and the other older at age twenty, both are at two different stages in their lives. Author Cristin Terrill does such a good job making Marina and Em two different characters. The younger Marina is jaded, spoiled, naive, and self-centered. The older Em is warn raw, rung out of tears, and cynical, the world has broken Em while Marine has yet to experience the pain of the future. Terrill does well to highlight how superficial Marine is as a teenager, Marina has great wealth, a big house, a politically connected family, and few worries beyond what to wear to her winter formal.  The betrayal of a friend. The crumbling of her country. Imprisonment. Torture. It all transforms Marine into Em. Em is willing to murder, steal, and lie for the greater good, for a brighter future that is not a military state. What connects the two characters is their love. Love for their friend, who begins to show shades of darkness, who Em knows will walk further into the shadows. Both girls hold onto hope like a life preserver, which connects them so strongly to each other. That love is what draws Finn to that past and future girl–the boy who once annoyed Marine but who Em falls in love with for his easy laughter and light heart. Finn is a stock character. The love interest the reader is also suppose to love. Doesn’t stop us from liking Finn, which is fine by me.

Terrill also did a wonderful job keeping the novel’s twists in her pocket. She kept me turning the pages, my ass on the edge of my seat. There are two characters, the antagonists, who are called the Doctor and the Director. The reader learns early on who the Doctor is, or who to suspect as the Doctor. Except, that is not the genius behind the character. Terrill kept me wondering how this character changed, how he/she could wreck the future, imprison Em and Finn, torture the teens. You meet his/her past self at one point, see the person he/she was, and you end up questioning “how did this person become the villain?”. Slowly Terrill peals away the onion and makes us understand the Doctor, we understand his motives but we don’t blame Em for wanting the Doctor six-feet in the ground. Which makes the ending of the novel so great… knowing who the Doctor was and will be, we think we know how to save the future and are willing, Em thinks she knows how to change her future and is willing, we and she want to save the future for Marine and a younger Finn. She’s prepared to kill and we don’t begrudge Em.Yet there’s another way. Sorry, no spoilers.

Time travel is not a huge part of the novel. Temporal shifting is how the past and future collide, the connector of the action, but the hard science is not explained in detail. One detail is explained and I think the explanation is flimsy. There was no need to explain any part of the science behind travel. There’s a machine or portal or whatever, people use this shifting tech/method and boom they’re in the past. That’s all we need. Em and Finn are not scientists, they know how to turn the machine on, get the date they want to travel to, and that’s good enough. They’re laymans and the readers sympathize. But Terrill had to explain more concept about time travel, which was too much. I won’t go into great detail and risk being spoiler-ish. Let’s just say the time travel detail involves paradoxes. Terrill’s explanation is loose and more on the fantasy-side than science fiction. Not a bad thing. Just distracting… for me. But this novel is about the characters and redemption, not about the time travel manual. I’m still able to suspend disbelief and enjoy this novel. “All Our Yesterdays” is a great work.

The time travel machine manual aside, the books is still a fun adventure. Marina/Em are such a great characters with a lot of depth, they’re not damsels but a strong women (each in their own right in the end), and both share a big heart… except, their greatest strength and weakness could save the future or doom us all. Read the book and find out.

To learn more about Cristin Terrill and her exiting debut novel visit the author’s website by clicking here. Support the author, visit her site, there on the site is a prequel web series to get you excited about “All Our Yesterdays”.

Three high school teens in the woods on a Friday night… some beers… skaters with a grudge… what could go wrong? Add in a couple of genetically created … END_OF_DOCUMENT_TOKEN_TO_BE_REPLACED

A dark short story about one man’s oversight concerning his death.  Since dying was just not part of his daily routine, the man just went on with his … END_OF_DOCUMENT_TOKEN_TO_BE_REPLACED