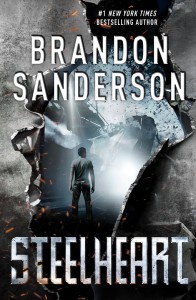 What it’s about (from Goodreads):

Ten years ago, Calamity came. It was a burst in the sky that gave ordinary men and women extraordinary powers. The awed public started calling them Epics.

But Epics are no friend of man. With incredible gifts came the desire to rule. And to rule man you must crush his wills.

Nobody fights the Epics… nobody but the Reckoners. A shadowy group of ordinary humans, they spend their lives studying Epics, finding their weaknesses, and then assassinating them.

And David wants in. He wants Steelheart—the Epic who is said to be invincible. The Epic who killed David’s father. For years, like the Reckoners, David’s been studying, and planning—and he has something they need. Not an object, but an experience.

Brandon Sanderson is a machine. Many authors churn out several books per year, popcorn novels, tasty but not very fulfilling. Sanderson’s had several novels come out this year and they’re all quality work. Moreover, the novels are diverse. He completed the epic fantasy series The Wheel of Time this year with “A Memory of Light”, put out a gearpunk novel called “Rithmatist” (click here for my gushing), and now is stepping into the superhero genre with “Steelheart”. And “Steelheart”, the first in Sanderson’s new YA series Reckoners, is good.

This is a not a straight forward hero’s journey story. In most common superhero stories an ordinary person will receive superpowers, needs to learn to use said powers responsibly, then that person fights an arch nemesis.  “Steelheart” is Sanderson’s work so the story is unique, with twists on old cliches we’ve come to expect in these stories.

In “Steelheart” ordinary people have received superpowers but instead of doing good the heroes are really villains. Absolute power corrupts absolutely. These super-people called Epics have used their powers to dominate mankind, doing what Zod and Luthor always try to accomplish. The worst of the Epics is a Superman-like character called Steelheart.

The story’s real heroes are actually those people resisting and fighting the Epics’ rule. The main character of the novel, and its sole POV character, is the sixteen-year-old David. Like most of Sanderson’s protagonists David is world-weary and cynical. David has a hard time trusting people but he’s a good guy at heart. His father was killed by Steelheart and he wants revenge, he wants to stand up and fight and so he seeks out the Reckoners to help him to this end.

That’s the crux of the novel. David and the Reckoners are out to pull a con on Steelheart, to bring the Epic down and inspire the populace of Newcago (future Chicago). David just has to get the Reckoners to trust him and convince them to let him join their team. He has one big asset to bring to the table too… he’s seen the invincible Steelheart bleed. Sounds simple? It’s not. Twists and turns upset the con and make the reader’s eyes go wide. You’ll say, “I should have seen that coming!”

The  novel’s pacing is lightning quick. Most of the chapters are sprinting forward with tons of action. Albeit there are nice breathers when the characters settle down to talk, just before more action explodes and the chapter ends in a cliffhanger! Really, the novel reads like a comic. Biff! Bam! Pow!

True to Sanderson-form, all the characters have unique personalities and are colored. The reader easily can distinguish each character from one and other through that character’s personality, their written-voice, and the quirks born from their backgrounds. It helps that every person has an individual role to play and they each have their secrets, which all makes the characters compelling. Even those characters we think we understand we don’t. It’s all part of Sanderson’s way of keeping the readers guessing.

Although “Steelheart” is a YA novel and not epic fantasy, worldbuilding is a huge part of the novel. And worldbuilding is what Sanderson does best. He explores the economics of a city run by a ruthless super-person, how the world reacts to the Epics. There is a religion centered around the belief that superheroes will eventually show up to counter the evil of the Epics (I especially liked the symbol of the religion, a nod to a certain comic book hero). Names of streets are that of comic book writers and artists, little Easter eggs. The coolest part of the worldbuilding are the Epics themselves. The Epics have superpowers but each has a weakness and that weakness can be anything, from a rock to a pencil, sunlight to darkness, to the arousal a beautiful women entices.  Everyday objects and situations, you never know. As Sanderson has stated in his First Law of Magic, it’s not the magic (in this case super powers) that make a story interesting but the costs/weaknesses.

Lots of action, great characters, twists enough to leave you dizzy, “Steelheart” is another super novel from Sanderson. It’s the first in a trilogy so there’s more to come, he’s writing the sequel right now (along with dozens of other novels).

Click here to visit Brandon Sanderson’s website to learn more about the author and his other works.

Three high school teens in the woods on a Friday night… some beers… skaters with a grudge… what could go wrong? Add in a couple of genetically created … END_OF_DOCUMENT_TOKEN_TO_BE_REPLACED

A dark short story about one man’s oversight concerning his death.  Since dying was just not part of his daily routine, the man just went on with his … END_OF_DOCUMENT_TOKEN_TO_BE_REPLACED