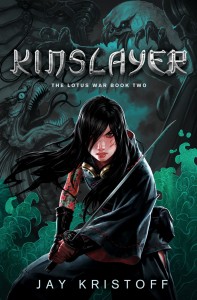 Back cover tease from Goodreads:

A SHATTERED EMPIRE
The mad Sh?gun Yoritomo has been assassinated by the Stormdancer Yukiko, and the threat of civil war looms over the Shima Imperium. The Lotus Guild conspires to renew the nation’s broken dynasty and crush the growing rebellion simultaneously – by endorsing a new Sh?gun who desires nothing more than to see Yukiko dead.

A DARK LEGACY
Yukiko and the mighty thunder tiger Buruu have been cast in the role of heroes by the Kagé rebellion. But Yukiko herself is blinded by rage over her father’s death, and her ability to hear the thoughts of beasts is swelling beyond her power to control. Along with Buruu, Yukiko’s anchor is Kin, the rebel Guildsman who helped her escape from Yoritomo’s clutches. But Kin has his own secrets, and is haunted by visions of a future he’d rather die than see realized.

A GATHERING STORM
Kagé assassins lurk within the Sh?gun’s palace, plotting to end the new dynasty before it begins. A waif from Kigen’s gutters begins a friendship that could undo the entire empire. A new enemy gathers its strength, readying to push the fracturing Shima imperium into a war it cannot hope to survive. And across raging oceans, amongst islands of black glass, Yukiko and Buruu will face foes no katana or talon can defeat.

The ghosts of a blood-stained past.

It’s no secret that I love Jay Kristoff’s Lotus War series. His debut, the first novel in the series, “Stormdancer” was a fabulous novel. “Kinslayer” is the sequel and Jay did not disappoint.  The chainkatana was raised.

How can you go wrong when Kristoff sticks with such an awesome formula? “Kinslayer” is more steampunk and Japanese myth, something unique, a twist on Euro-inspired fantasy. Picture this… dark-haired youth Yukiko astride a creature that is half eagle half tiger, cutting through clockwork-armored samurai wielding chainsaw katanas and grounding (read: destroying) airships. It’s cliché to say but “Kinslayer” is more high-flying adventures from Yukiko and Buruu.

Except “Kinslayer” is so much more than its predecessor. It’s a fantastic step forward for the Lotus War trilogy’s mythology and story. Kristoff raised the stakes, ratcheted up the tension. There were moments when the reader believes some of the characters will not see the last page of the novel, and in those time-stilling moments the heart stops. When my heart stops while reading a novel, I know I love its characters. This is evident by how much emotion Kristoff effortlessly draws from the reader when pressing his characters to their physical and metal limits.  The reader is agonized. There is so much blood on “Kinslayers” pages. Blood and tears. Although readers may cringe, they won’t stop turning the pages.

War is brewing is the empire of Shima. Even though Yukiko killed the shogan in “Stormdancer” the throne will not grow cold. War is the momentum pushing the novel forward. However, “Kinslayer” is about struggle, the struggle of the heart. Shima’s heart. The characters’ hearts.  While the Kage and four clans struggle for dominance over the empire, everyone manipulated by the Guild and its polluting Chi, the characters struggle with just how far they’ll go to secure their home’s and their people’s futures. No one is innocent in this war. The Kage fight for the people but its members are the product of their group’s oppression and hate, feelings which they believe are righteous, their own polluting Chi, shackles they cannot free themselves from. But in seeking revenge, the Kage discriminate and oppress those in name of their own cause. There are moments when you’re whispering into the pages, asking the Kage, “What are you doing? You’re supposed to be the good guys!” The reader is constantly conflicted.

More conflicted are the main characters, the protagonists. Dealing with being the Kage’s symbol for liberation and hope, her father’s recent murder, weighs heavily on Yukiko. She’s made herself hard and pushes herself to live up to everyone’s expectations, which makes her reckless and risk her life. Her decisions are rash. Her judgement clouded. The keening connection she had with beasts is tenuous and represents her lack of real control and the helplessness she feels. She responds by lashing out. The stress of her current situation doesn’t help, her own hatred and rage rule her actions during “Kinslayer”, turning her into the enemy she wishes to put down. We expect her to act the saint but she is all too human. Buruu, her thunder tiger, her life line, is a voice of reason because he’s gone through a similar dark time in his life when his rage consumed him… or so Kristoff leads us to believe. There is still so much about Buruu’s life prior to meeting Yukiko that the reader is not privileged to (though we’re given hints).

One of the most interesting characters is Kin, a Lotus Guild defector who is trying to find a new place in his world’s chaos. He’s greatly highlighted in this installment of the trilogy. Kin’s left everything he knew behind, the only family he’d known, a life, a purpose, a destiny. He’s sacrificed and the world he’s escaped from the Guild to does not welcome him warmly, no matter his connection to Yukiko or his contributions to the safety of the Kage. He’s an outsider. On top of that, the Kage’s treatment of an particular enemy prisoner makes Kin question the rebellion group’s methods. Are they better then the Guild or all too similar? Kin sees both sides so he is the most neutral POV the reader can rely on. There’s wisdom in Kin’s narrative. His struggles especially, to fit in, to reconcile his decisions, tug at our hearts. It makes us question our own world. How our government treats its enemies during times of war. What would we sacrifice for our peace? Would we give up our souls?

“Kinslayer” is a fun novel like its predecessor but it contains so much more emotional depth. The novel succeeds in upping the stakes going into the final installment of the Lotus War trilogy. Although the novel is a middle book, it feels like it has a central conflict that was explored in full, that is, how war produces shades of grey, how our characters are never as innocent as we would like to believe. We get all this emotional depth plus more clockwork samurai, airships, ninja, and thunder tigers. Score! “Kinslayer” is Lord of the Rings meets “The Last Samurai”.

Three high school teens in the woods on a Friday night… some beers… skaters with a grudge… what could go wrong? Add in a couple of genetically created … END_OF_DOCUMENT_TOKEN_TO_BE_REPLACED

A dark short story about one man’s oversight concerning his death.  Since dying was just not part of his daily routine, the man just went on with his … END_OF_DOCUMENT_TOKEN_TO_BE_REPLACED