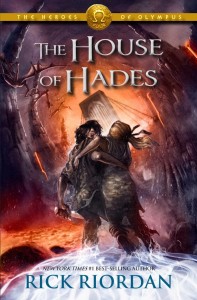 About the book, from Goodreads:

At the conclusion of The Mark of Athena, Annabeth and Percy tumble into a pit leading straight to the Underworld. The other five demigods have to put aside their grief and follow Percy’s instructions to find the mortal side of the Doors of Death. If they can fight their way through the Gaea’s forces, and Percy and Annabeth can survive the House of Hades, then the Seven will be able to seal the Doors both sides and prevent the giants from raising Gaea. But, Leo wonders, if the Doors are sealed, how will Percy and Annabeth be able to escape?

They have no choice. If the demigods don’t succeed, Gaea’s armies will never die. They have no time. In about a month, the Romans will march on Camp Half-Blood. The stakes are higher than ever in this adventure that dives into the depths of Tartarus.

What does an author do to make sure his/her readers pick up the next book in a series? Simple! Dump his two main characters into hell then write “to be continued”. If done correctly, not only will the author have dumped the characters into hell, the characters will have latched on to the readers’ ankles and dragged them along too! Then, finally, after miles of no light to indicate the tunnel’s end, a year of waiting for the next installment in the series, seeing the completed novel on the bookshelf will be salvation for the legion of loyal readers. Rick Riordan did a masterful job living up to his nail-biting cliffhanger in “The Mark of Athena” when he dropped Percy Jackson and Annabeth Chase into Tartarus. The wait was torture, worse would have been trudging through Tartarus living through the furious shades of our toughest decisions. “The House of Hades” is that wonderful followup, the wait well worth the agony. Why? Read on puny mortals and wanna-be demigods!

Stakes are always high for our favorite demigods. The stakes are even higher in “The House of Hades”. There are two stories paralleling each other, both ending in the same goal. Jason, Piper, Leo, Nico, Hazel, and Frank are traveling aboard the Argo II, winging their way across the Mediterranean to the Doors of Death in the mortal world. They need to close the doors in order to keep the monsters of myth from regenerating so quickly, to weaken Gia’s forces, her power basis, before the giants attempt to resurrect her. Most important, the Argo II has to arrive at the Doors of Death to save their friends. Percy and Annabeth are in Tartaras, also heading for the other side of the Doors of Death. If the two groups don’t meet up at the same time, Percy and Annabeth are doomed to a life of torment and misery by the all the monsters they’ve ever slayed.

Percy and Annabeth readers know well. Percy was the central hero of Riordan’s first series. While Percy and Annabeth have changed little from first series’ end to this new series, they still bring a breath of fresh air. In Tartaras, the two older heroes are surrounded by enemies of their past, tormented by the deaths they have rote.  These are heroes. No matter if the monster and titan deaths were done to save the world, Percy and Annebeth still question whether they did the right thing in the killing. It is only through leaning on each other, channeling the love they hold for each other, that they are able to forge ahead. That is sweat and tender. Riordan has written a very real relationship between Percy and Annabeth, which makes the reader want to cheer for their survival.  Their remorse over the monsters they have killed, the sacrifices they have made to achieve their victories, the past decisions they wish to reclaim and change are what make this journey compelling and heart wrenching.

Let’s not forget the new heroes. Riordan gives everyone their due, not a small feat when he has a ship full of interesting demigods. And not just demigods but hormonal teenagers. Come on! Angst and drama will ensue! There are those characters torn between two worlds and other characters who want to change their reality and forge a new path. There are two stand out characters in the book, though Riordan gives everyone the spotlight at some point.

Leo is probably my favorite new character from The Heroes of Olympus series. He hides behind his witticisms and his machines. Except behind that vale Leo is not so confident. He has insecurities. He fears harming his friends with his fire-based powers and being used by Gia. Throughout “The House of Hades” it’s Leo who grows the most of the characters. Stakes are high and Leo must grow up. His personality doesn’t change by the end but certain events cause him to reevaluate his importance to his friends and the quest, knows he must sacrifice and accepts the sacrifice–but is ready to change his destiny. By the end of the book Leo has purpose, goals. His humor remains, despite his trials in the books, and I’m glad because his loud-half, roguish humor always brings a smile to the reader (and groans from the crew of the Argo II).  Leo is the heart of The Heroes of Olympus.

The other standout character is Hazel. Unlike other heroes who are stuck between two worlds, Hazel has no past to return to. Her brother Nico raised her from the dead and now she’s a handful of decades from her home time. Yet, Hazel forges ahead and finds tremendous strength.  Let’s face it, life in high school is tough with gossipy cheerleaders, piles of homework, and cliches to navigate. Hazel is the girl in the crowd everyone at Greek/Roman Myth High would avoid. She’s the daughter of the god who runs the underworld! The precious metals she draws forth from the earth are poison! Hazel is not getting invited to parties. Yet she finds strength in her own internal power. She has to in order to help her friends succeed at the Doors of Death. And she does so without few complaints. She’s a terrific heroine and–like Annabeth–is a great role model for young girls.

Despite the action, the danger, the heroics and drama, I very much enjoyed how Riordan handled Nico. The author has not ever focused very closely on Nico. He’s troubled and lonely. He talks to ghosts and is the son of the Hades/Jupiter. Unlike his sister Hazel, who strives forward and draws strength from her friendships, Nico isolates himself. In this book, Riordan reveals a big secret related to Nico. In “The House Hades” Nico is revealed to be gay when Jason learns Nico has a thing for Percy. Jason responds to the revelation with open mindedness and compassion, assuring Nico that his friends will accept him, that he must trust them and they will trust him in return. However, Nico distances himself from the crew of the Argo II. For now. He has more growing to do so he can trust. This brings a new level of understanding to Nico and hopefully Riordan will explore Nico’s character more in the next novel. I’m happy that he presented a tolerant attitude through Jason and also depicted Nico’s personal struggle in a mature and realistic fashion for young readers. For a long time Nico has kept himself hidden, stayed away from people, it’ll be hard for Nico to trust his sister and her friends with his full self.

“The House of Hades” is a wonderful adventure. The suspense is built up to a degree that the reader understands and experience the gravity of the situation. Our heroes are in danger and we believe that danger, they may not succeed in closing the Doors. There are also no easy answers for the characters regarding their personal struggles beyond self-reflection, which makes for wonderful character drama. Riordan continues to raise the bar for his signature world, giving readers more reasons to pick up the next volume. Although, I don’t think people will trudge through Tartarus while waiting for the next volume, which is a weakness but a relief for readers.

Three high school teens in the woods on a Friday night… some beers… skaters with a grudge… what could go wrong? Add in a couple of genetically created … END_OF_DOCUMENT_TOKEN_TO_BE_REPLACED

A dark short story about one man’s oversight concerning his death.  Since dying was just not part of his daily routine, the man just went on with his … END_OF_DOCUMENT_TOKEN_TO_BE_REPLACED